Hart and Cantillon collect the big prizes at Zandvoort

David Hart and Mike Cantillon cornered most of the Masters silverware handed out during the Historic Grand Prix event at Zandvoort. Taking place on its original date and with the crowd allowed into the paddock, the Dutch event made a refreshing change on a historic calendar hit hard by so much bad news.

In the end, Masters was able to bring four grids to Zandvoort, where drivers, team members and spectators alike were treated to lovely late-summer weather with only the occasional shower interrupting an otherwise flawless weekend. On our first trip to the continent, everyone made sure to enjoy themselves as much as they could, a task made easier by the laid-back atmosphere at the newly renovated Dutch track. 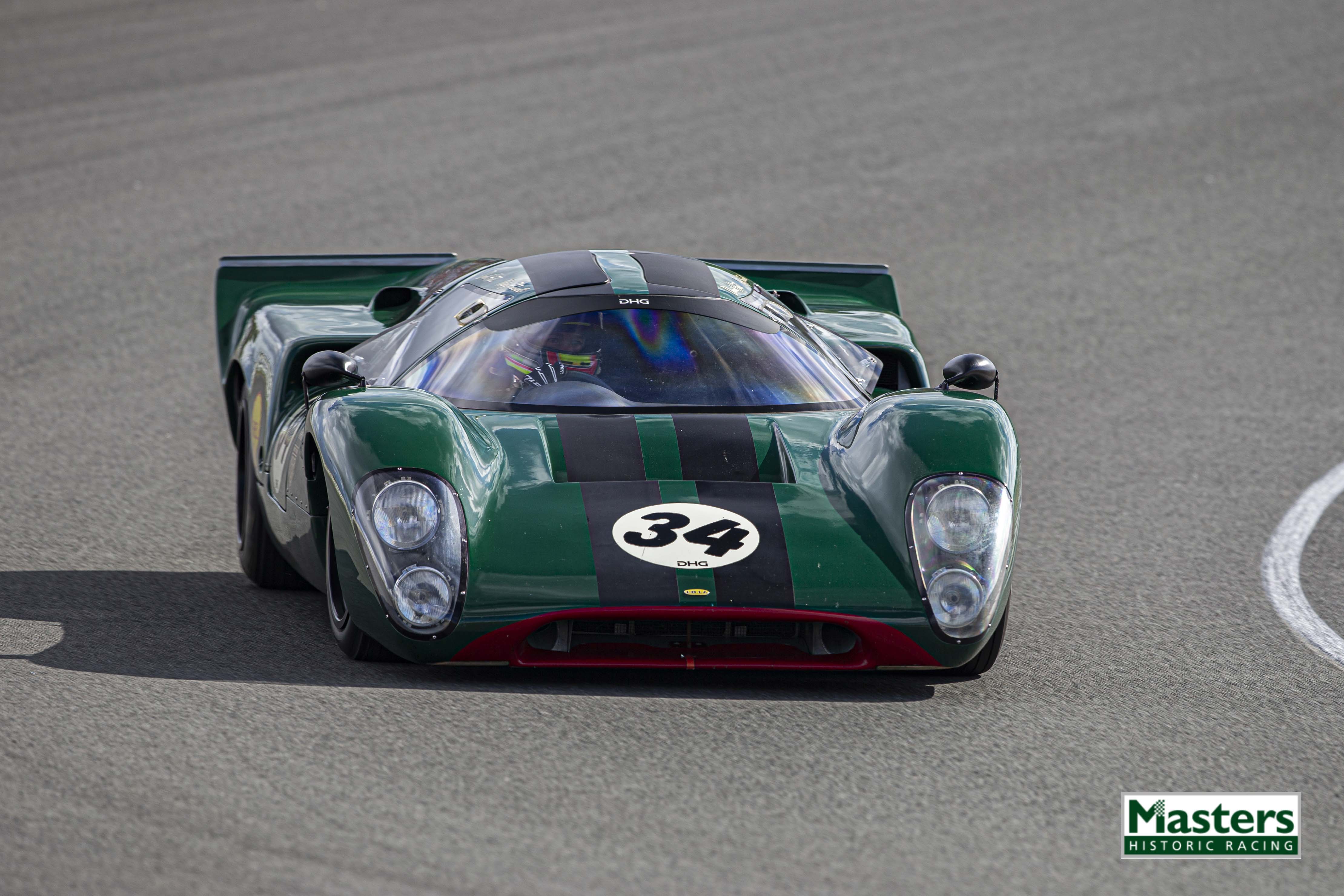 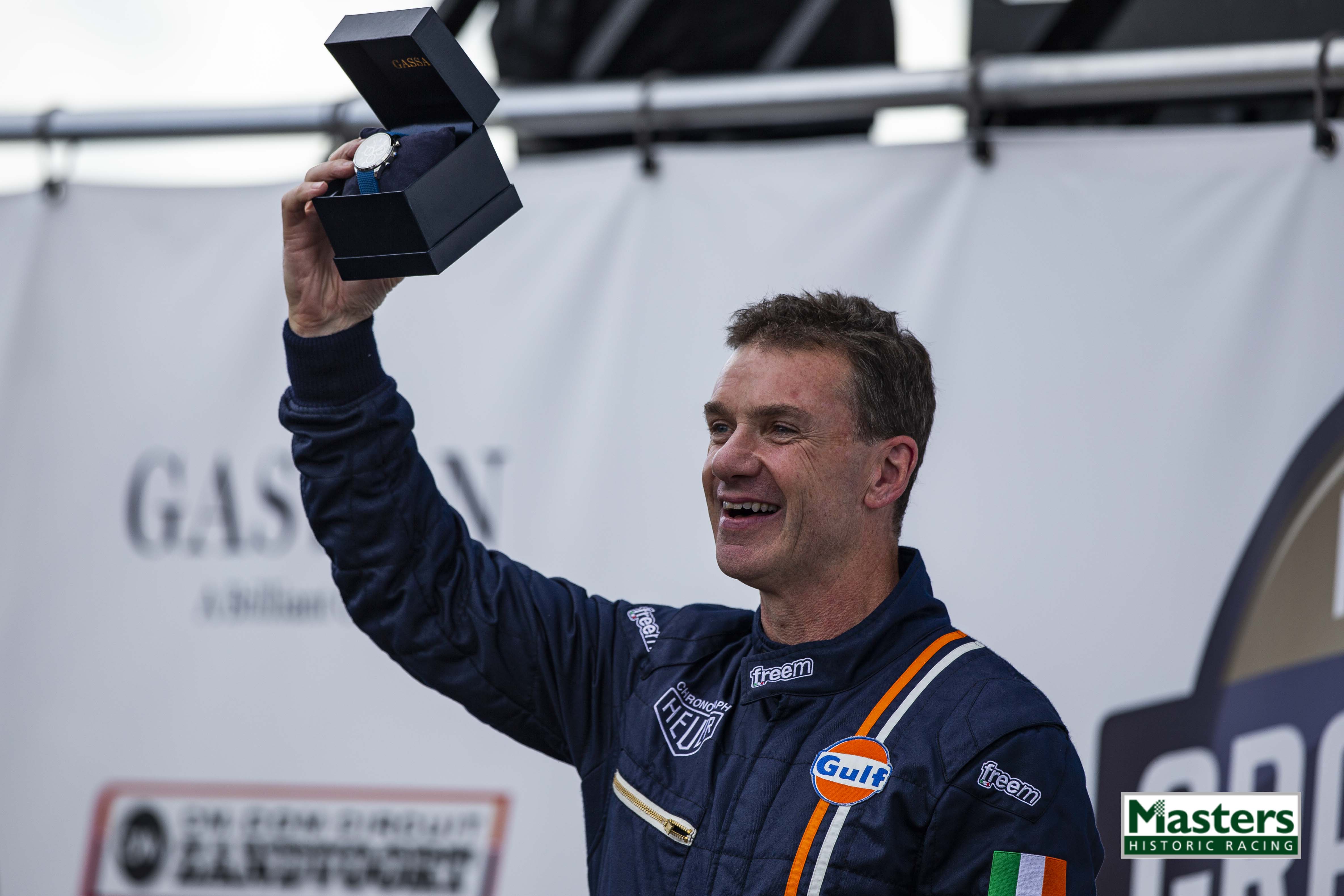 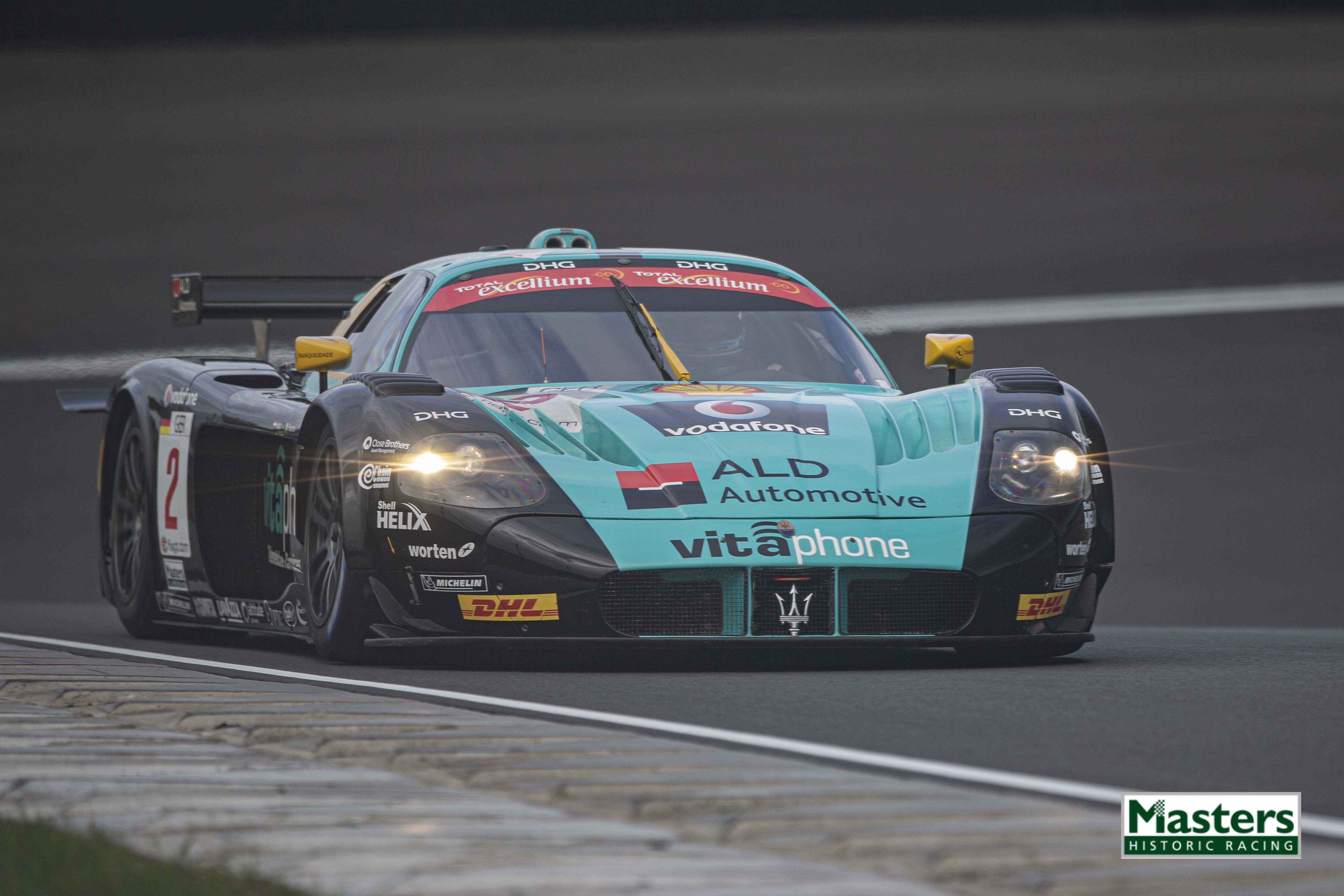 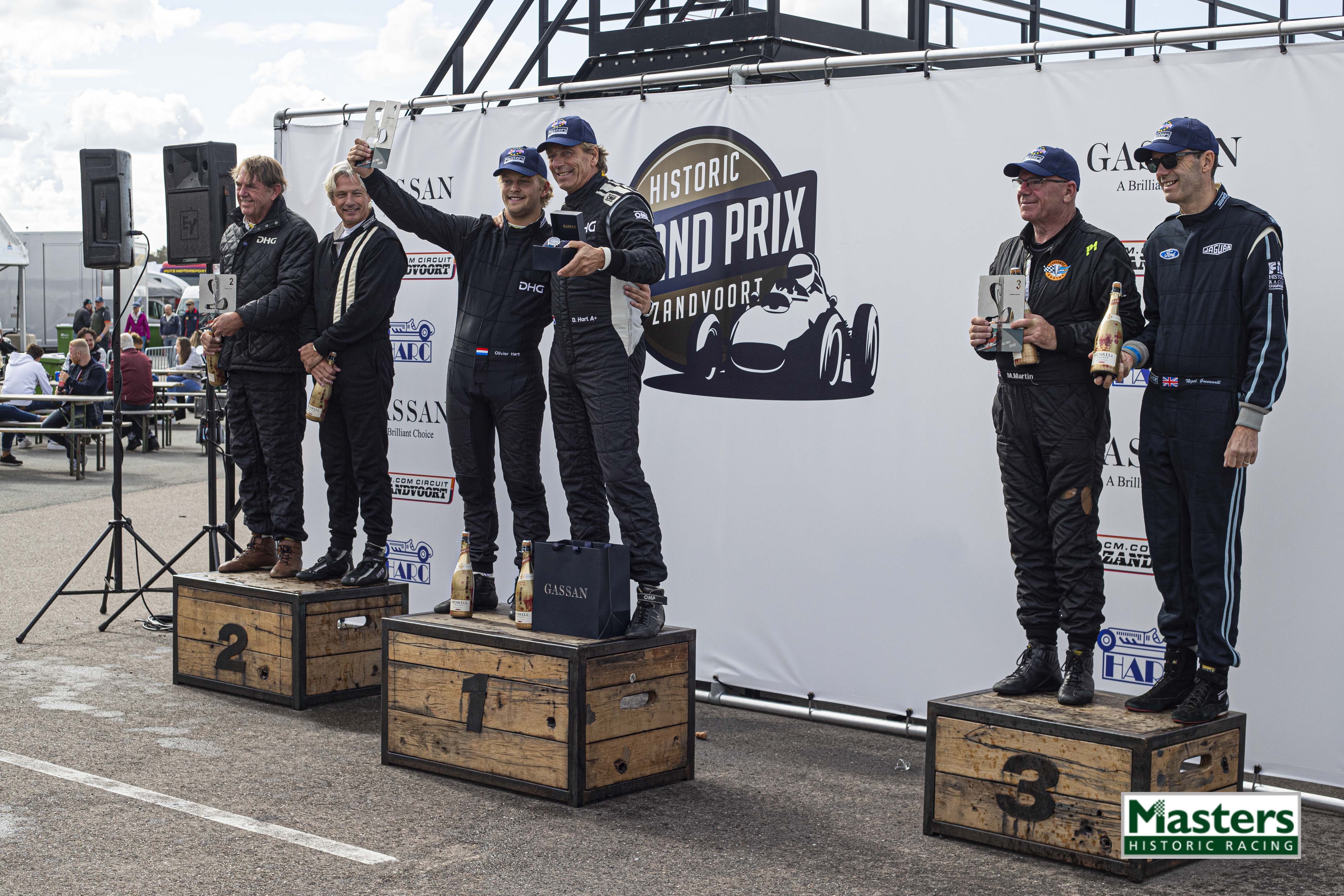 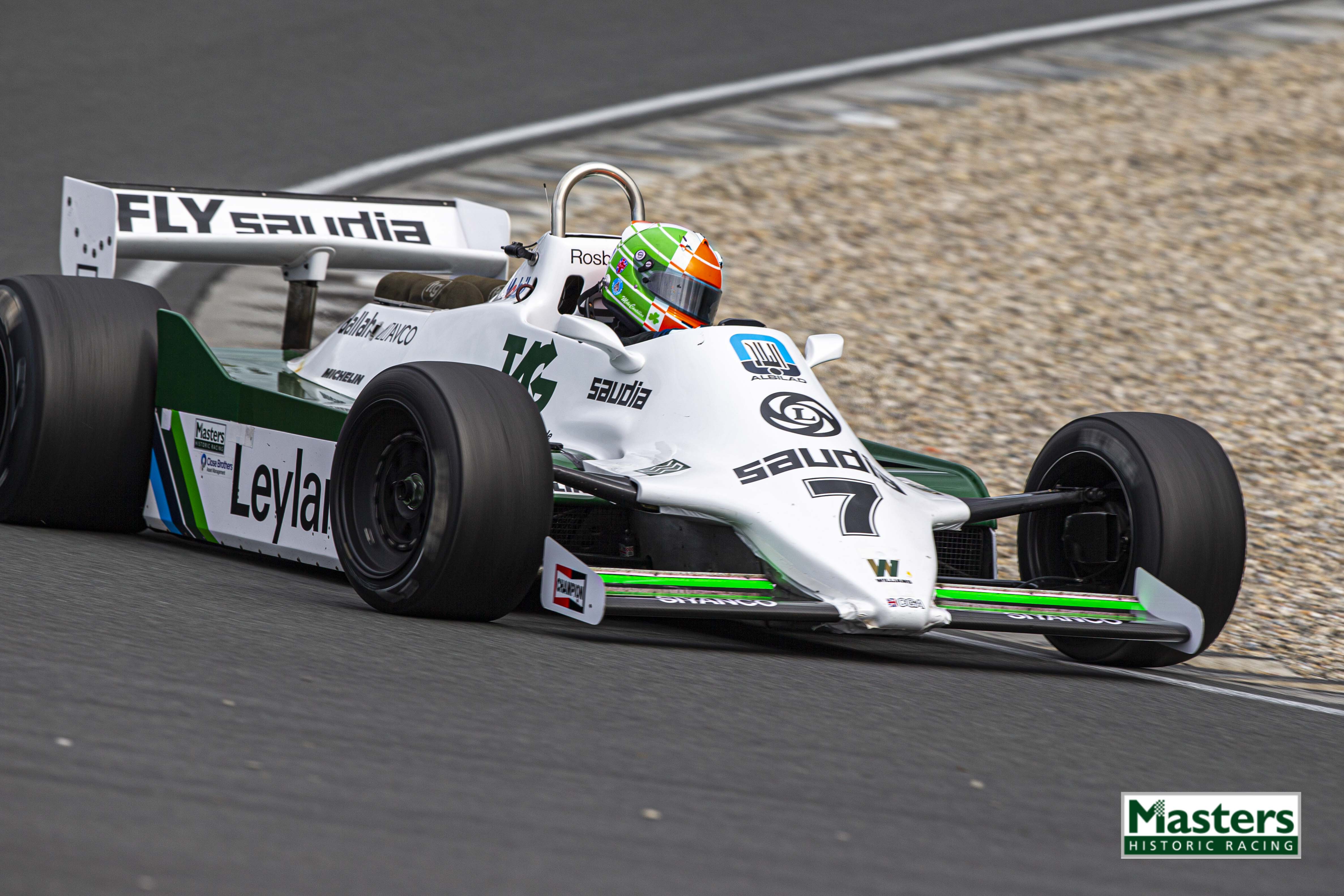 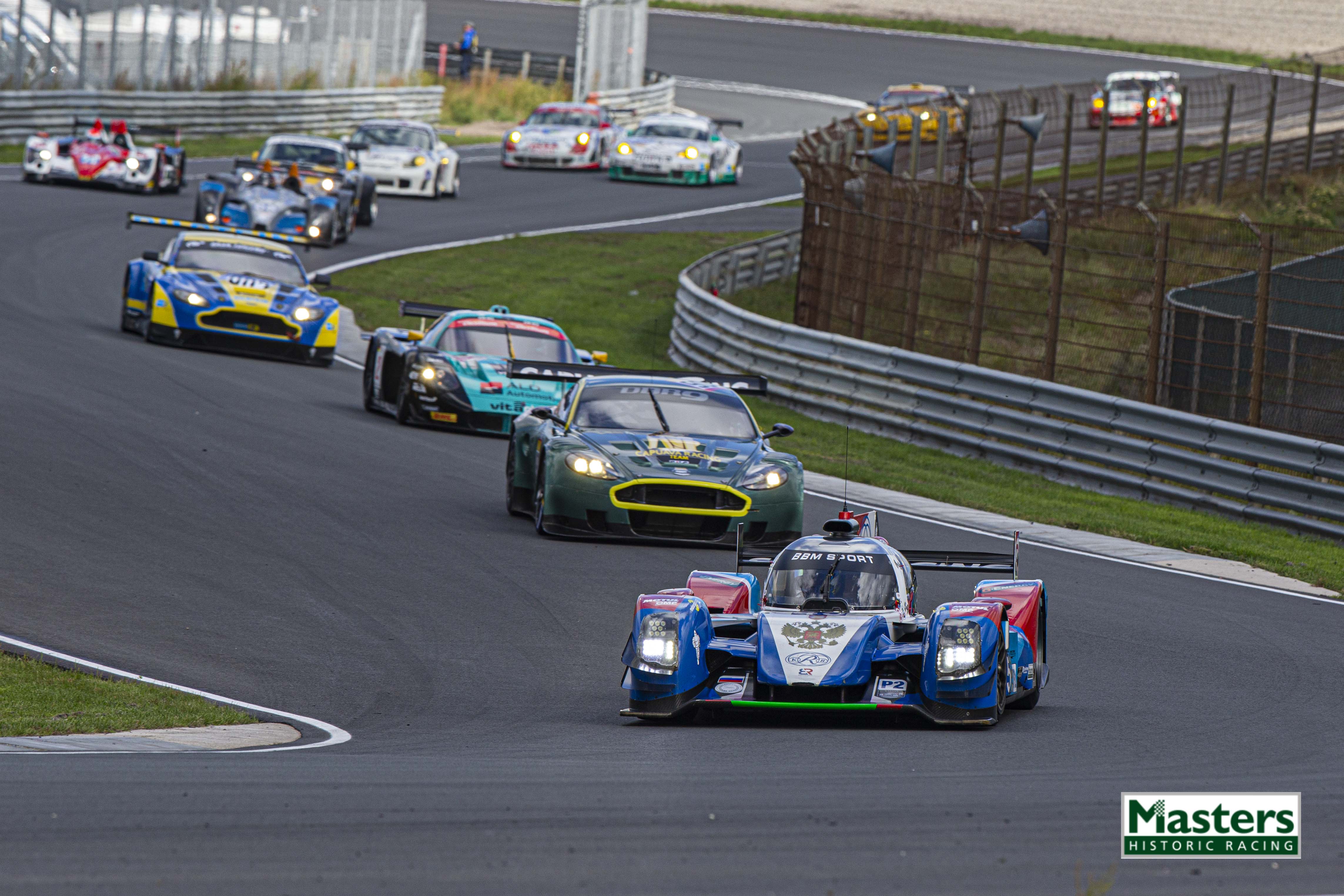 David Hart made it a perfect Sunday as he took his third win in three starts by adding victory in Zandvoort’s Masters Historic Sports Car race to his tally. Having already won the Masters Gentlemen Drivers race with son Olivier and then the second Aston Martin Masters Endurance Legends race sharing with Nicky Pastorelli, the Dutchman again teamed up with Pastorelli to comfortably win the sportscar race in their Lola T70 Mk3B.

The Dutch pair were only headed during the halfway pitstop phase, before Pastorelli put the win beyond doubt in the second part of the race. From the back of the grid, Manfredo Rossi put up a strong challenge in his Osella-Abarth PA1 but a spin just before the spots dropped him behind Matt Wrigley’s Chevron B19, Wrigley himself having charged to the front after being forced to start from the pitlane. At two-thirds distance, Rossi regained his second place to finish 25 seconds down on Pastorelli. Wrigley chased home the Italian three seconds further down the road.

The Robert Beebee/Steve Brooks T70 Mk3B and the Nikolaus Ditting/Sam Hancock T70 Mk3 moved up into fourth and fifth on the back of Marc Devis’ early demise in the Chevron B19. This allowed John Sheldon in the Chevron B16 to take sixth overall.

As David Hart’s pole-sitting Lola-Chevrolet T70 Mk3B maintained its lead after the rolling start, the opening laps centred around Manfredo Rossi starting from the back and Matt Wrigley starting from the pitlane, but both making up places like there was no tomorrow. Rossi especially was a man with a mission, desperately wanting to undo a weekend filled with one mishap after another. By lap 3, Rossi’s Osella-Abarth PA1 had passed Marc Devis’ Chevron B19 for second place before chasing down Hart in the lead while setting one fastest lap after another.

By lap 5, Wrigley was up into third, having demoted Devis’ similar B19 to fourth, the two having left a sizeable gap in their wake. Robert Beebee was fifth in the T70 Mk3B, well ahead of Nikolaus Ditting’s non-B Mk3, the German involved in a big fight with John Sheldon’s B16. Chris Lillingston-Price’s B8 was up next, followed by Chris Jolly in the pre-66 Cooper Monaco T61M. Sadly, we had said goodbye to one of the four T70s already, as Eric Mestdagh was forced to retire his Mk3B with gearbox issues.

At the front, an old rivalry was resumed as Hart and Rossi fought over every inch of tarmac, the Osella edging closer to the Lola in the corners while the coupé prototype stretched its legs on the straights. On lap 8, battle was temporarily suspended as the safety car entered the frame. Independently, but within seconds of each other, Jolly had pulled off at Kumho corner, the penultimate corner before the banked Arie Luyendijk corner, while Lillingston-Price ground to a halt at Gerlach corner.

Regrouped, and with the safety car retreating to the pits, the remaining cars stormed towards Tarzan corner to start their 11th lap. Now, Wrigley was right back in the mix, as he chased down Hart and Rossi in front. A few minutes later, the pit window opened, and Hart was the first of the leaders to come in, handing the Lola to Nicky Pastorelli. A few moments after, Rossi lost control of the Osella, dropping some eight seconds while getting back on the move, and suddenly Wrigley found himself in the lead – until he too came in for his mandatory stop.

After the stops, Pastorelli clocked a number of fastest laps of the race to get some four seconds between himself and the chasing Wrigley, with Rossi a further nine seconds behind on lap 19. Steve Brooks, having taken over from Robert Beebee, was fourth, 30 seconds adrift. The race having lost Devis on lap 15, Sam Hancock was now fifth in the T70 Mk3 taken over from Ditting, with Sheldon in sixth, over a minute away from the leader.

With 15 minutes to go, Pastorelli’s lead had increased to 14 seconds – but Rossi had closed on Wrigley, the Italian repassing the Chevron on lap 23. As the finish approached, the order remained the same, Pastorelli punching in fastest lap of the race with a 1.42.280 on the penultimate lap. Rossi was 25 seconds down in second while Wrigley trailed Rossi by three seconds. The Robert Beebee/Steve Brooks Lola was a distant fourth, 11 seconds ahead of the Ditting/Hancock Lola. Sheldon finished sixth, a lap down on the winner.