Race from dawn to dusk at the ‘World Centre of Racing’ and the home of the Daytona 500!

The HSR Daytona Classic 24 Hr 2020 was a week full of exciting racing!  Although there were some weather related challenges through the weekend, there was a wonderful atmosphere throughout and it seemed that all the drivers and teams enjoyed their Daytona experience.

A big thank you to HSR, who set up this fantastic event, as well as all the Officials who made this event happen despite all of the challenges they wer presented in 2020. 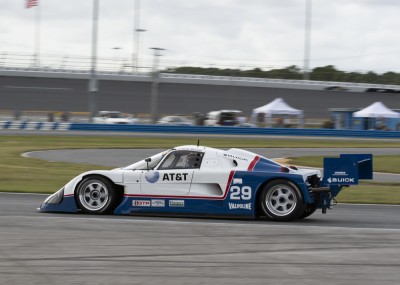 Under sunny skies but a lot of wind – a hurricane may be approaching – the Masters Endurance Legends drivers started the first stint of the 2020 Classic 24 at Daytona at 1 p.m. ET Saturday with the Group F field taking the initial green flag.

The race ended with a late caution flag, leaving John Reisman (2nd overall) at the top of the Masters Endurance Legends USA charts in his number 33 Hudson Historics 2014 Coyote Corvette DP, with a fast lap of 1 minute, 43.010 seconds around the 3.56-mile road course inside the famous Daytona International Speedway. Tommy Byrne was next on the list (3rd overall) in the Byrne/James Hagan number 8, 2013 Oreca 03 LMP2.

In the group C/D the Carlos de Quesada/Billy Johnson car number 241 Alegra Motorsports 2013 Riley Corvette DP had mechanical issues. They started last, then rocketed through the 19-car field up to seventh place, logging a very fast lap of 1:42.468 before trouble stuck, leaving the car with a DNF.

In Group C&D the Mark Brannon/Ray Snowden number 77 B&B Motorsports Riley & Scott BMW won the first round in the Group C&D classes, clocking laps as fast as 1:45.629 on the way to the overall victory. Close behind was the number 29 J&L Fabricating 1987 Spice SE87L of Cal Meeker, then the number 1 - 1997 BMW M3.R E36 of Scooter Gabel.

The number 44, 1983 KMW Motorsports Jaguar XJR5 of Craig Bennett and Robert Boller suffered a suspension issue just prior to the green flag, and never made a lap.

In Group E, as he often does, Masters Endurance Legends driver David Porter, in his number 7, 2010 Peugeot 908 HDI, laid waste to the field in the first stint of the Group E cars, with a best lap of 1:37.677. The number 2 Audi R8 LMS of Ray Evernham and David Roberts suffered mechanical issues and finished the race five laps in arrears.

Scooter Gabel in the number 1, 1997 BMW M3.R/E36, was a strong second in Masters Endurance Legends, 4th overall in this race. Scooter fought great battles with the Porsche which was a very excitin gpart of the race. Cal Meeker’s number 29, 1987 Spice SE87L, a car that typically runs at the front, dropped to the rear of the race with brake issues, completing only 2 laps.

And finally, Group F had their second stint on the track. The Carlos de Quesada and Billy Johnson number 241 Alegra Motorsports Riley BMW DP had a solid outing, taking the lead with 22 minutes to go, and holding onto it for 10 minutes in the Masters Endurance Legends group, becoming 2nd overall in the race. Johnson, who was driving the number 241, is an IMSA champion and was a development driver for the Ford GT.

For the third stint, once again it was the Group C and D cars out first.

After Cal Meeker’s number 29, 1987 Spice 5E87L, suffered brake problems in the second stint, it was a no-show for the third stint. That left the door wide open for the Mark Brannon/Ray Snowden, with Mark Brannon behind the wheel, in the 2001 Riley & Scott Mk III, which led early on until electrical gremlins side-lined the car.

This left Scooter Gabel in the number 1, 1997 BMW M3.R/E36 leading the race within Masters Endurance Legends, but with 12 minutes to go he dropped to third overall and finished there. “The car’s running great,” he said. “It always runs great.” As for driving race cars at 4 in the morning: Gabel, a veteran of multiple Rolex 24 Hours at Daytona races, said “It’s still cool. You’ve got to do it while you can.”

Next up was Group E, meaning David Porter and his number 7, 2010 Peugeot 908 HDI was the automatic favorite, and he delivered. On a track Scooter Gabel described as “a little dusty,” Porter dropped to second on the start but quickly made his way back to the lead, turning laps in the 1 minute, 38 second range, the fastest car in all the classes.

After problems with the car in the first two stints, leaving Ray Evernham to suggest he may park the car, Evernham was back out for the third stint in the number 2 Audi R8 LMS, running competitive lap times. Moments before the race ended, a torrential rain hit the track. The track was flouded without any chance to see where to go. Ray Evernham: "I didn't even know if I am on the track of the exit road..."

As the checkered flag flew, the electricity to the track infield was interrupted. Power was out for nearly two hours, and officials plan to resume racing about 7 a.m. ET. Therefore, instead of ending at 1 p.m., the Classic 24 will end at 3 p.m.

And they did drop the green flag at 7 a.m. sharp with the third stint for Group F. Among the Masters Endurance Legends competitors, the James Hagan/Tommy Byrne number 8, 2013 Oreca 03 LMP2, with Byrne behind the wheel, finished first overall in the race. John Reisman in the number 33, 2014 Coyote Corvette DP, finished just behind in third overall.

The fourth and final stint mirrored the third: Group C and D, followed by Group E, and then Group F.

Group C and D took the green flag at 11 a.m. Sunday, instead of 9 a.m., due to the two-hour loss of electricity and the fierce storm that caused it. The downtime allowed the track to mostly dry out, but there were still some treacherous spots where water had not drained away. By now, though, despite a few very short and inconsequential showers, the track is in very good shape for the fourth stint.

The number 77 Ray Snowden/Mark Brannon 2001 Riley & Scott Mk III suffered electrical issues and was a no-show for the fourth round. That left Scooter Gabel in his number 1, 1997 BMW M3.R E36, to carry the flag for Masters Endurance Legends and winning his class for the weekend after an exciting battle with the Porsches within this group. And Gabel did well, with an impressive second-place overall finish in his BMW M3.

Group C and D was followed by the fourth and final stint for Group E. That meant one last chance today to see David Porter in his immaculate number 7, 2010 Peugeot 908 HDI. Porter drove to a second-place overall finish. In the end he was the winner of Group E overall which he had set as his goal for the HSR Daytona Classic 24 Hour. We saw a very happy David Porter on the podium!

Winding up the competition for the Masters Endurance Legends drivers was the Group F finale.

John Reisman in his number 33, 2014 Coyote Corvette DP finished 2nd overall on the podium followed by James Hagan and Tommy Byrne, in their number 8, 2013 Oreca 03 LMP2 on 3rd overall of the HSR Daytona Classic 24 Hours after an uneventful race.

2020 HSR Daytona Classic 24 Hours is completed now and we are heading to Sebring in begin December for the final round of Masters Endurance Legends USA.