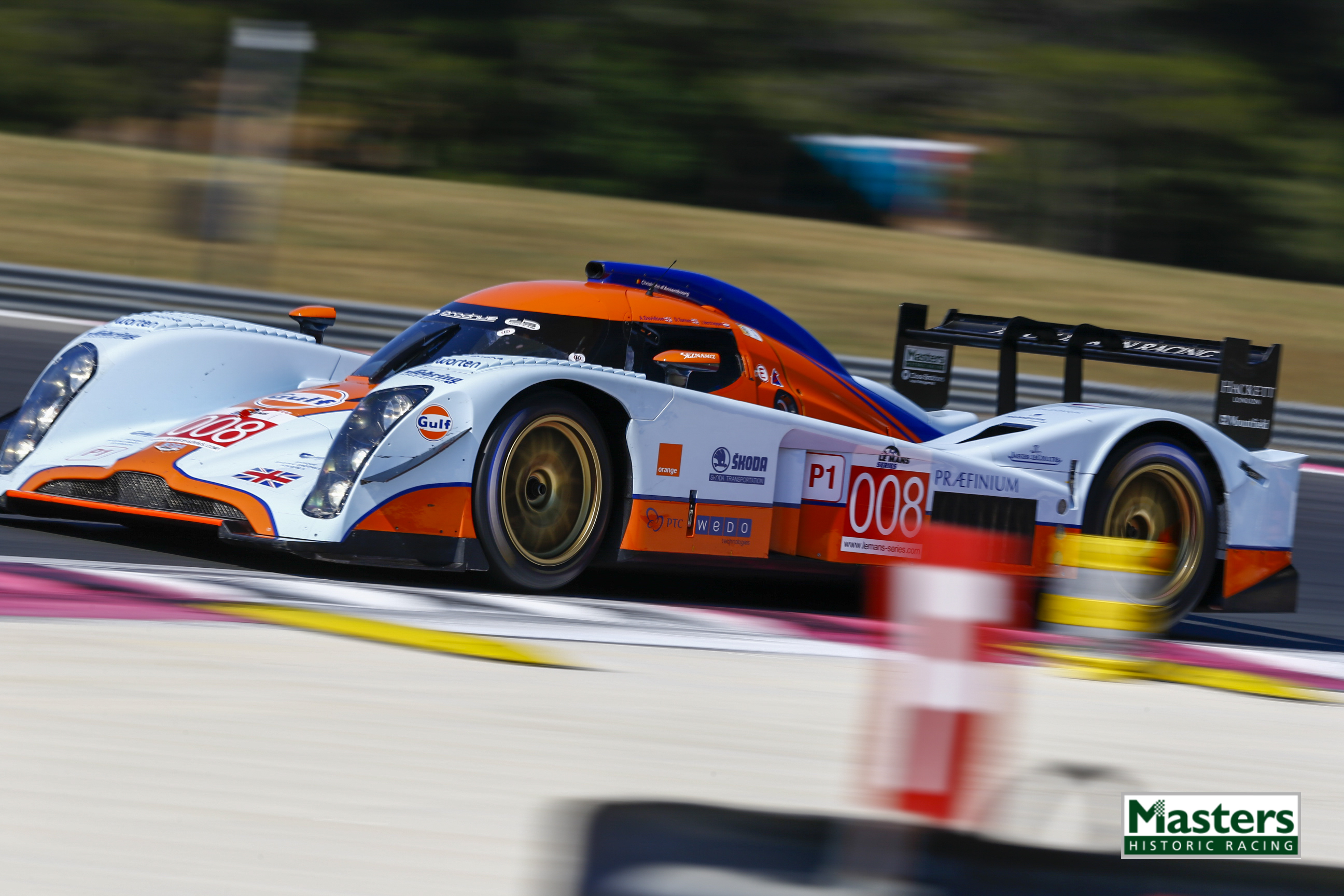 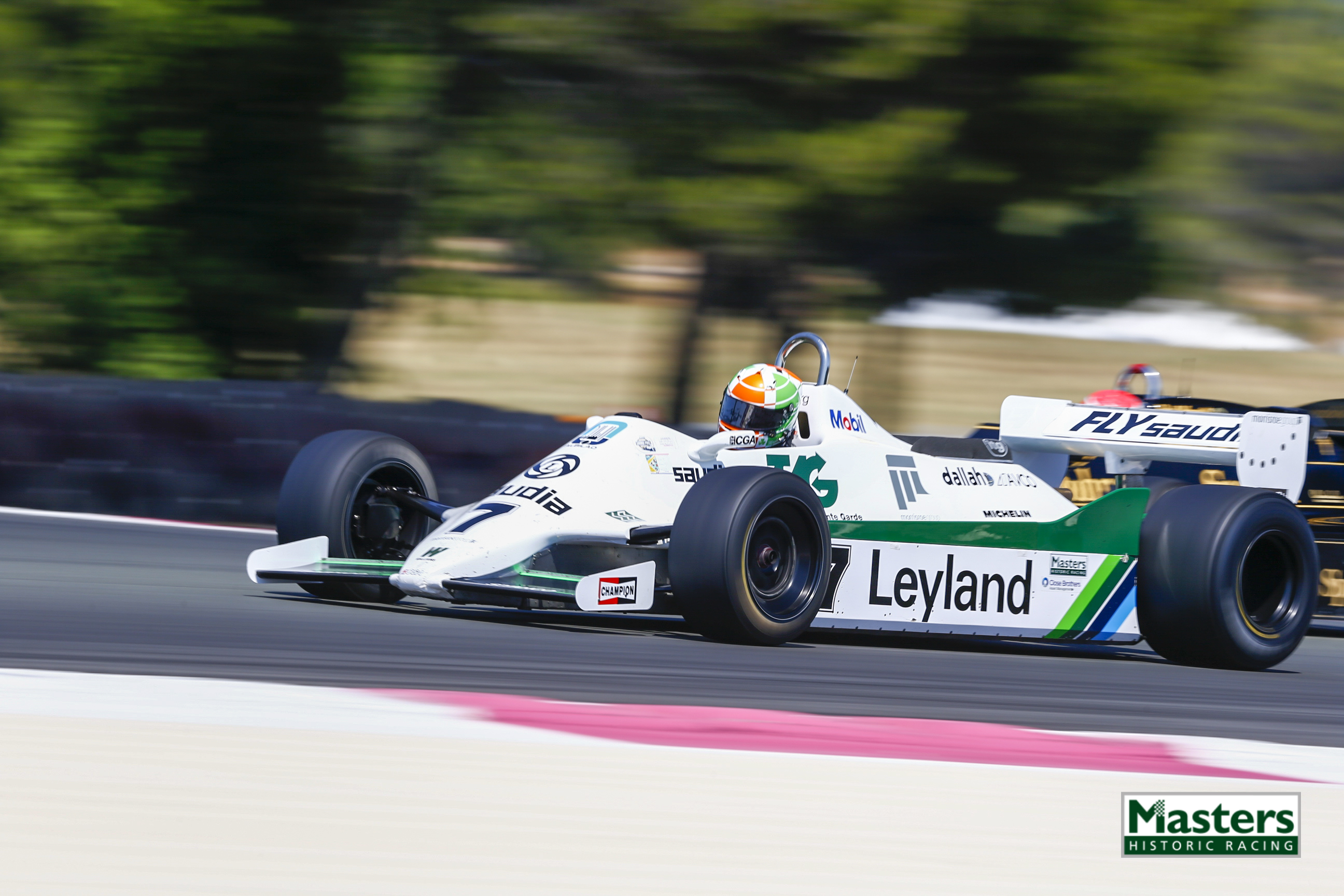 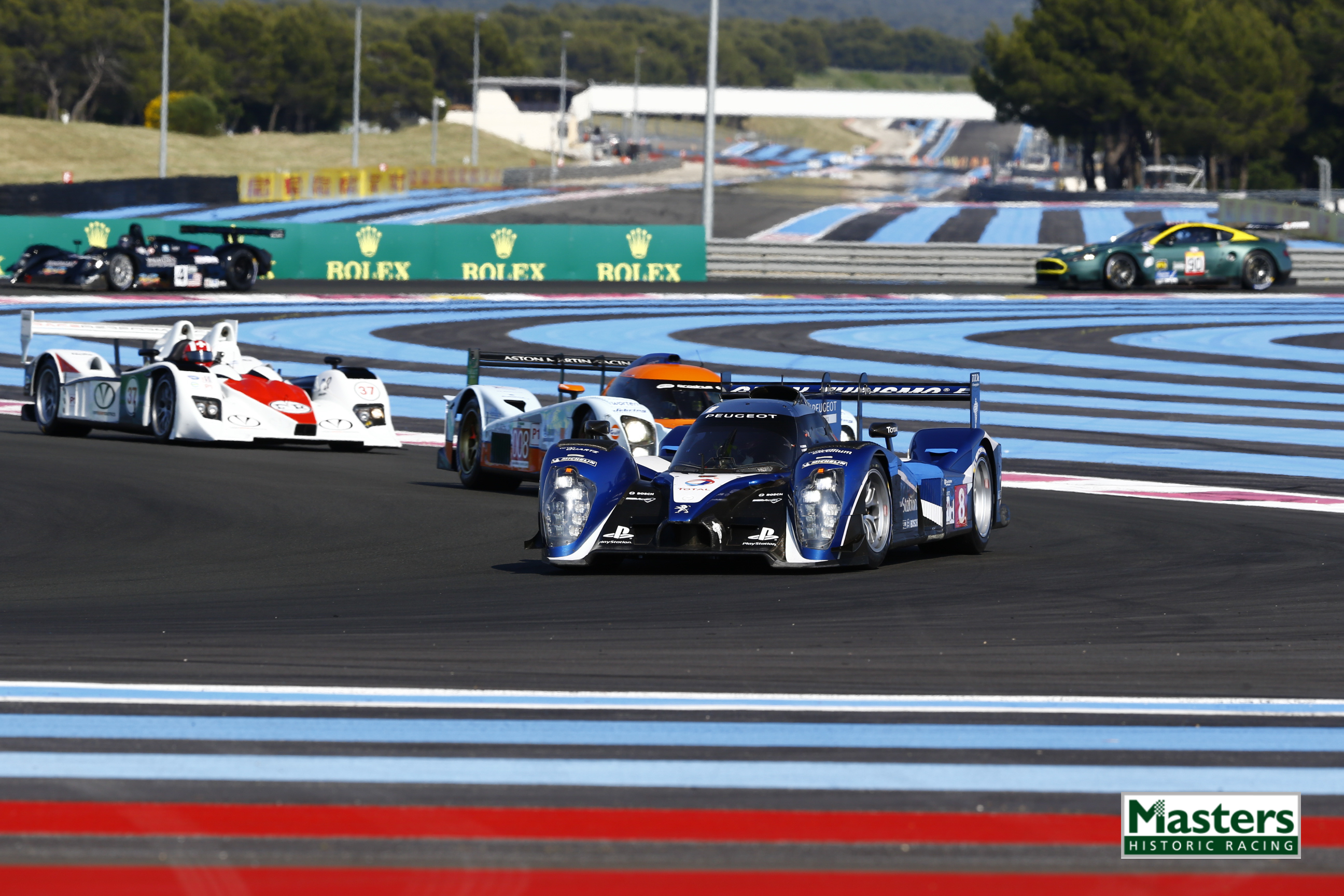 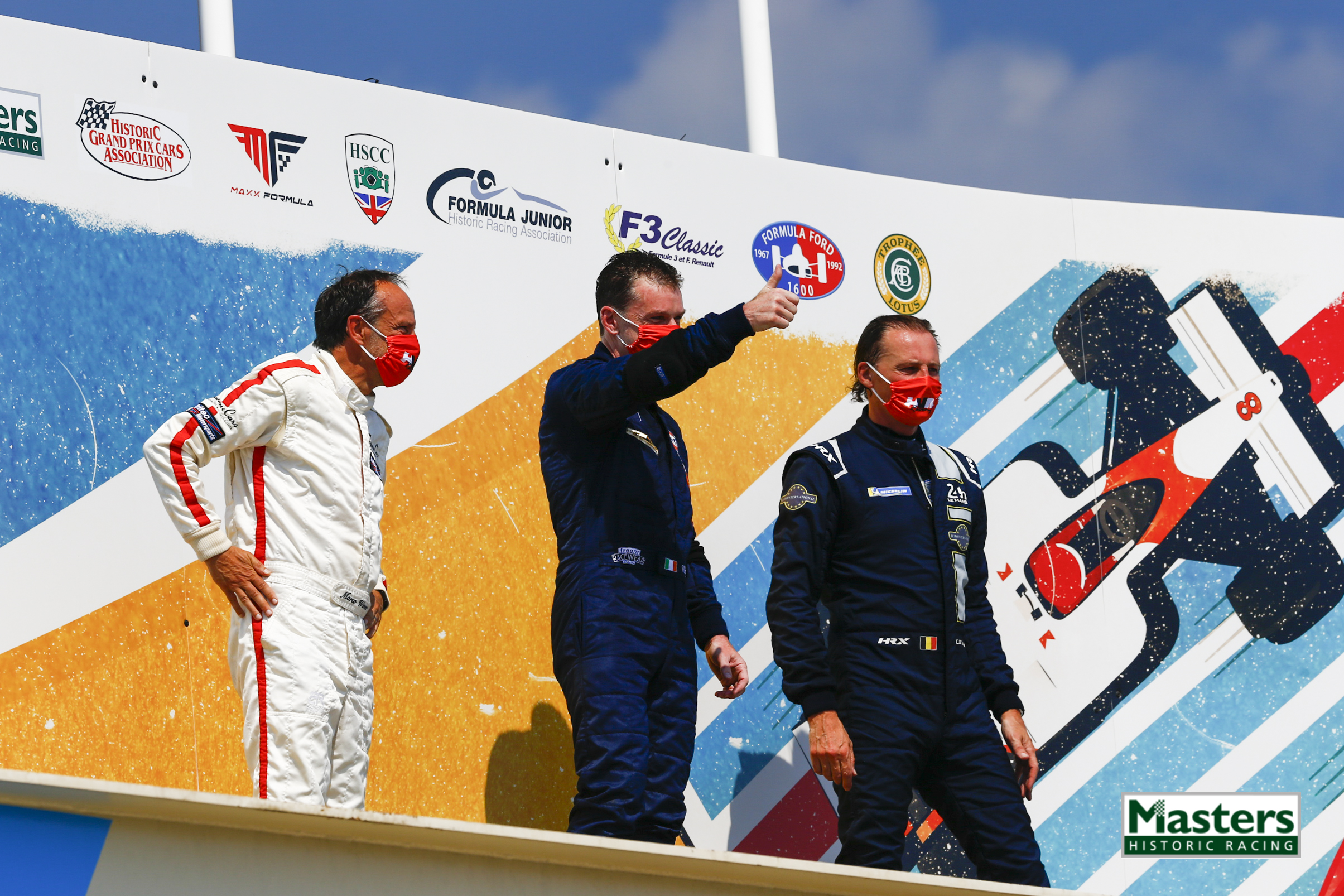 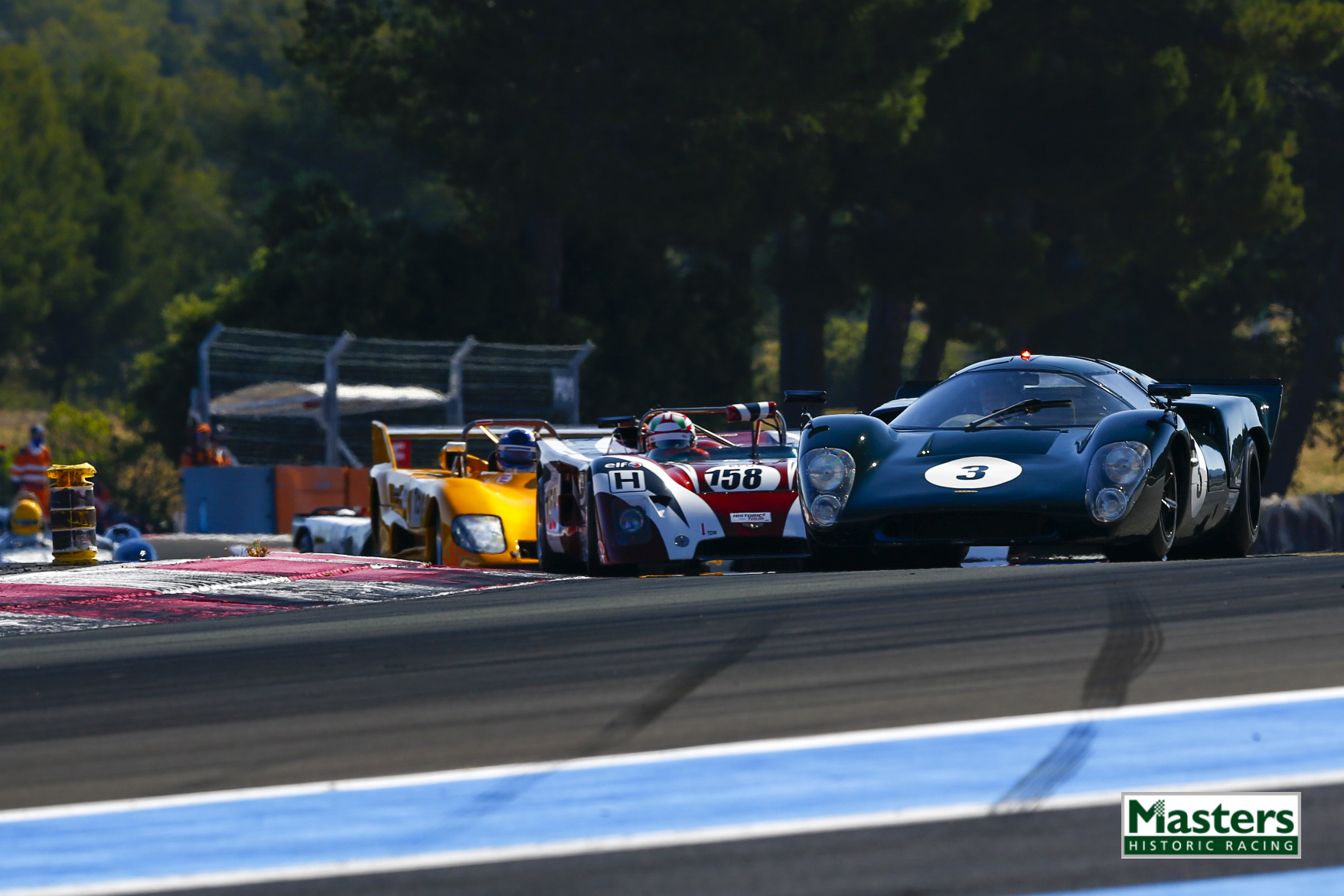 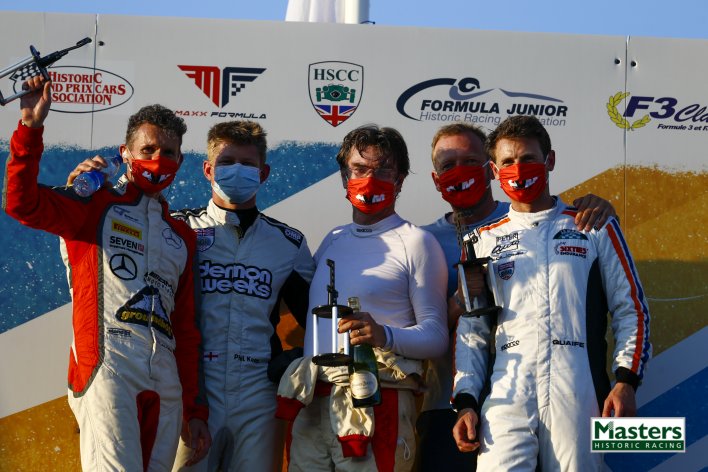 Christophe d’Ansembourg did everything right to bag victory in the second Masters Endurance Legends race at Paul Ricard, as the Belgian reclaimed the lead from the fast-starting Marcello Marateotto, and then brushed off the Swiss driver’s renewed challenge towards the end, the Lola-Aston Martin DBR1-2 finishing 2.9 seconds ahead of the Lola B06/10.

Kriton Lendoudis (Peugeot 90X) and Shaun Lynn (BR Engineering BR01) missed out when they stayed out as the safety car was deployed right on the cusp of the pit window. Because of their error, the pair lost well over a minute, but Lynn still captured a distant third and first place in the P2 category. A stop-and-go penalty for overtaking under yellows dropped Lendoudis even further back but the Greek recovered to salvage fourth ahead of the Georg Hallau/Marco Werner Lola-Lotus B12/80 – that took second in P2 – and Xavier Micheron in the Riley & Scott MkIIIC, the latter working his way up from the back. In seventh overall, Philippe Papin and Karl Pedraza took third in P2 with their ORECA 03.

The fight for GT class honours proved to be incredibly tight, Germans Nikolaus Ditting and Dominik Roschmann initially fighting it out at the front in a close tussle between their Aston Martin DBR9 and Ferrari 550 Maranello respectively. However, with a timely pitstop during that critical safety-car period, Olivier Tancogne’s GT2 Dodge Viper GTS-R jumped both GT1 cars to take a surprise class victory. At the end, Ditting lost out to Roschmann as they fought over second place in class.

On the green lights, Lendoudis led away from d’Ansembourg but behind Saturday’s warring pair Marateotto was on an early charge, passing Lynn into the third corner before storming past the Lola-Aston Martin as well to take second. Behind the top four, Hallau stayed in touch in fifth, but a gap had evolved to Ditting in the lead GT car, the German having passed Papin’s ORECA for sixth. The Frenchman was soon usurped by a whole gaggle of GT cars led by Roschmann and Padmore, as Phil Quaife (Ferrari 430 GT2) and Olivier Tancogne also followed through.

Two laps down, Marateotto wasn’t done yet, the Swiss driver also passing Lendoudis, with d’Ansembourg nipping by as well. The Belgian having got into his rhythm now, the Lola-Aston began to harry the ex-Intersport Lola in the lead, and on lap 3, d’Ansembourg outbraked Marateotto into the chicane. By now, Lendoudis trailed the pair by four seconds, with Lynn five more seconds down and Hallau following 12 more seconds further back.

40 seconds down on the leader, the lead GT battle was as hot as it was in race 1, Ditting keeping Roschmann at bay, but from the back Xavier Micheron in his Riley & Scott MkIIIC got into the mix to pass both for sixth overall. Meanwhile, Furness ended a miserable weekend by again retiring his Courage LC75 to the pits, the misfire in his Judd engine playing up once more.

Behind the two GT1 cars, Padmore had his hands full fending off Quaife and the younger Tancogne, while Ron Maydon in the Ligier JSP3-15 was closing up on Papin in 12th. In 14th and 15th, Xavier Tancogne and Jason Wright were having a Ferrari GT fight of their own, GTE versus GT3.

On the opening of the pit window 15 minutes into the race, d’Ansembourg led Marateotto by two seconds, with Lendoudis trailing by seven seconds. Lynn continued to dominate the P2 class, the BR01 now 25 minutes ahead of Hallau in fifth. The German was the first to pit, as he handed the P2 Lola-Lotus over to Marco Werner in the hope that his countryman could do something about Lynn’s advantage. Speaking of Germans, Ditting and Roschmann were now having a real ding-dong for the GT class lead, Roschmann’s Ferrari finally jumping Ditting’s Aston Martin going into the first turn.

As Ditting answered by coming in for his stop, the safety car was out, Michael McInerney having spun his Mosler MT900R. Now everyone was coming in – d’Ansembourg, Marateotto, Micheron, Roschmann, Padmore, Quaife, Maydon and both Tancognes. Lendoudis and Lynn stayed out, however, as they followed the safety car around for another lap. Meanwhile, Eric Martin’s Debora SP91 remained in the pits, the team working on a gearbox issue.

McInerney having got going again, the green flag was waived sooner than expected, and as the safety car returned to the pits, Lendoudis and Lynn followed it in as d’Ansembourg and Marateotto already came storming by. When Lendoudis and Lynn realised their mistake, their rivals were well over a minute up on the road…

So now it was a two-horse race between d’Ansembourg and Marateotto, the Belgian leading his Swiss rival by 1.6 seconds. Lendoudis was still third but one minute and 12 seconds down – and now also had to contend with a 10-second stop-and-go penalty for overtaking under yellows! Because of his mistake, Lynn in fourth had dropped into the clutches of Micheron, with Werner in sixth closing on the two. Meanwhile, Karl Pedraza in the ORECA 03 started by Papin had worked his way up to seventh overall to be third in the P2 class.

Through a timely stop, Olivier Tancogne’s Dodge Viper GTS-R now led Ditting and Roschmann by 6 and 15 seconds respectively, with Padmore lurking in fourth in the GT category, while in front d’Ansembourg looked to have pocketed the win, as the Belgian stabilised a three-second gap to Marateotto with four minutes still to go. Having served his penalty, Lendoudis was now trailing in sixth but soon jumped Werner to chase after Micheron in fourth.

As the race came to a close, d’Ansembourg brought home the win 2.9 seconds ahead of Marateotto while Lynn won the P2 class in third, albeit one minute and 39 seconds in arrears of the winning Aston Martin. Despite his penalty, Lendoudis got within three seconds of the BR01 to take fourth ahead of Werner, both having swamped Micheron in the end. The Papin/Pedraza ORECA took a lonely seventh while Olivier Tancogne surprised by vanquishing the two GT1 cars on his way to victory in the GT class.