Masters Historic Racing has ticked off the first event of a two-part historic racing fiesta under the sun, as the four grids present on the Iberian peninsula treated the Spanish crowd to six outstanding races. At the Jerez Historic Festival, Christophe d’Ansembourg took the double in Masters Endurance Legends while Mike Cantillon and Marco Werner shared the spoils in Masters Historic Formula One. Steve Brooks and Martin O’Connell proved emphatic winners in Masters Historic Sports Cars, with John Spiers and Nigel Greensall prevailing in a Masters Gentlemen Drivers race that remained tense until the end. 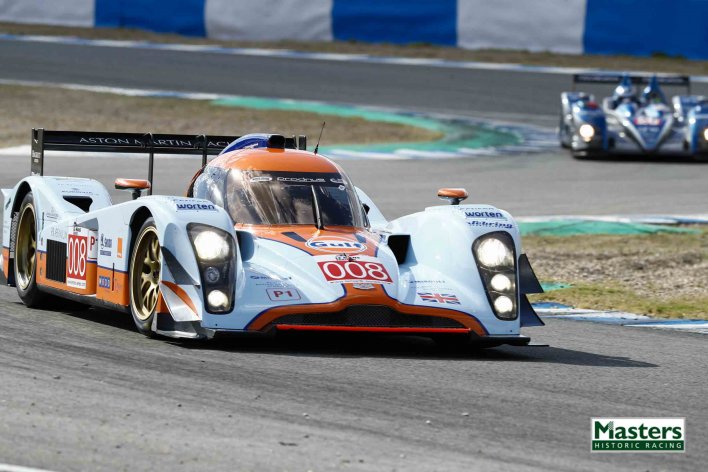 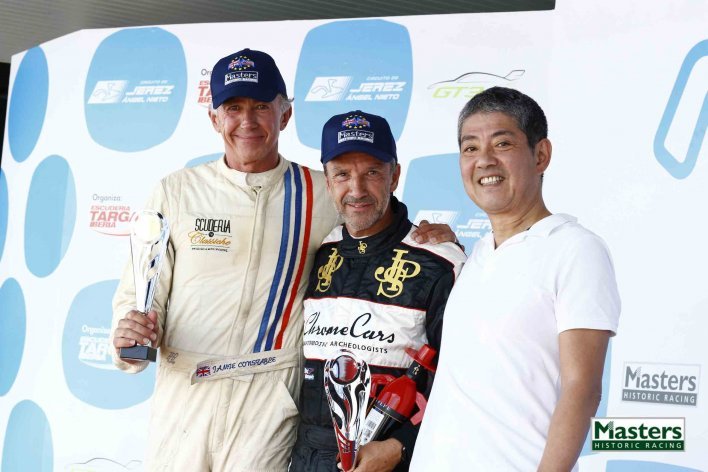 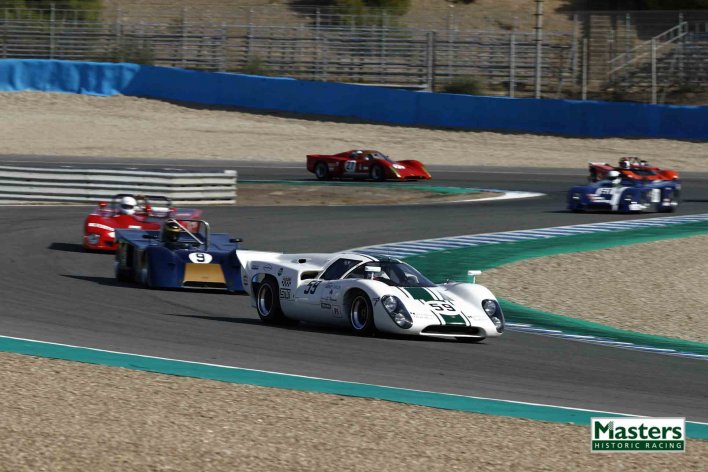 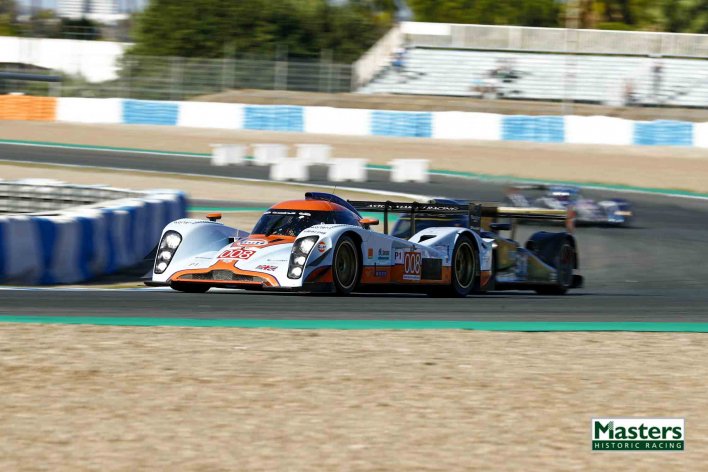 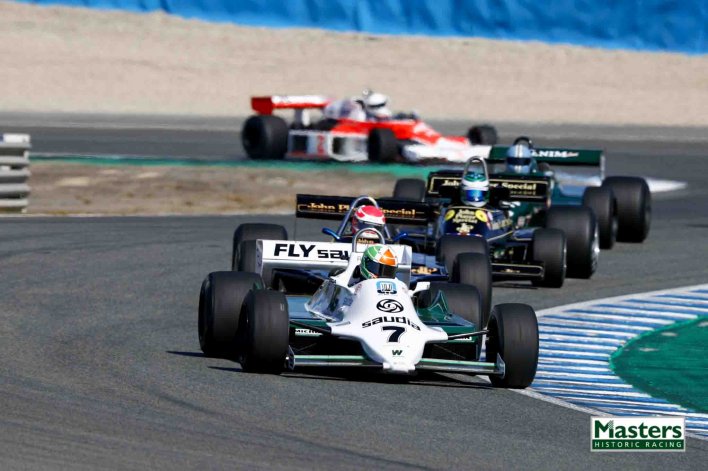 D’Ansembourg doubles up in Masters Endurance Legends fiesta at Jerez

“Yes, the double! I’m happy, especially after my F1 race where I was leading and spun”, said d’Ansembourg. “Here, I was really cautious all the time, so I let Marco go.”

During his opening stint, the Belgian saw Marco Werner break away in the German’s Lola-Lotus B12/80 to open up the 23-second gap necessary to negate his and teammate Nick Padmore longer pitstop time for an elite driver pairing. Padmore looked like rejoining in the lead but d’Ansembourg flew past when he exited the pits, to see the Lola-Aston win by 2.2 seconds. In the Zytek 09S, Keith Frieser ran Padmore a close third.

“I pushed like hell!” said Werner about his attempt to open up a big enough gap. “I was still in the rhythm of my F1 race, so I gave it all I could.”

“He went past just as I was leaving”, said Padmore, “but he was flying, I couldn’t get near him.”

“This time the car was good”, said Scott who enjoyed his tussle with the prototypes. “I was trying to be respectful and bring it home safely. It’s a pretty valuable car!”

“Much better than this morning”, said Wright despite not winning. “I put on a fresh set of tyres and actually enjoyed this one. In fact, I’m happy to be here. I got a bad ‘flu last week and it didn’t look like I was going to make it.”

Around four o’clock in the afternoon, rounding off a successful Jerez weekend, the Masters Endurance Legends cars headed out for their second race of the day. From the start, d’Ansembourg led away yet again but Werner soon got past Frieser for second place. Maydon snatched fourth from Atkinson who had now taken over Hagan’s ORECA-GM FLM09. Furness in the Courage LC75 was sixth, holding the GT cars of Aaron Scott and Jason Wright at bay.

While earlier in the day, d’Ansembourg managed to hold off Werner for lap after lap, the German this time knew no mercy, taking the lead on lap 2 and leaving d’Ansembourg and Frieser to fight between themselves. The Lola-Lotus B12/80 was flying, and at the end of lap 3, Werner had opened up a seven-second gap to the Lola-Aston Martin DBR1, with Frieser’s Zytek 09S a second further back.

22 seconds down on the leader, Maydon held a steady fourth, his Ligier-Nissan JSP3-15 keeping Atkinson at a safe two-second disadvantage for the ORECA, that was now actively chased by Furness. And Scott too, since the Aston Martin DBR9 was joining the prototype fight, having dropped Wright by six seconds. Indeed, next time around, the Aston relegated the Courage to seventh in order to set after the ex-LMPC car just up ahead.

Werner having to negate the longer pitstop forced upon himself and fellow pro co-driver Padmore, the German set out to increase the gap to d’Ansembourg. On lap 6, Werner led by 16 seconds while Frieser began to gradually lose ground, the Canadian now trailing the Lola-Aston by three seconds. While Maydon contiuned to run fourth, Scott was now his closest pursuer, also having dealt with Atkinson who still had Furness to fight.

15 minutes gone, and the pit window was open for driver changes and a mandatory stop. In fact, there would be just two driver changes, as Werner would come in with a 23-second lead that he wouldn’t be able to hand over fully to Padmore. In fact, d’Ansembourg was quicker to come in than Werner, for the moment handing second place to Frieser, his Zytek now 26 seconds down on the Lola-Lotus. Meanwhile, further back, Furness had passed Atkinson for sixth.

On lap 11, Scott was the next to come in to hand over to Bob Blain, followed by Atkinson, Wright and Frieser, as Werner, Maydon and Furness continued for another tour before they also made their stops. When Padmore exited the pits, it looked like mission accomplished for Werner, as his teammate still had a few seconds in hand over d’Ansembourg – but the Belgian was flying and darted past the Lola-Lotus as it returned to the track. Frieser too, meanwhile, was just three seconds away from Padmore. Maydon was a safe fourth, leading a lapped Furness, with Atkinson sixth, and Blain seventh, now chased by Wright.

Now it would be a straight fight to the finish. As d’Ansembourg upped his tempo in comparison to Padmore his advantage grew to five seconds on lap 16, with Frieser still just two seconds down on the Lola-Lotus. As the clock ticked down, the Belgian in the lead kept adding the tenths to a maximum lead of around seven seconds and only eased down towards the end to win by 2.2 seconds, with Frieser nine more ticks behind. Maydon took a distant fourth ahead of Atkinson, while Scott won the GT category from Wright. Furness’ Courage was a late retirement on lap 19.