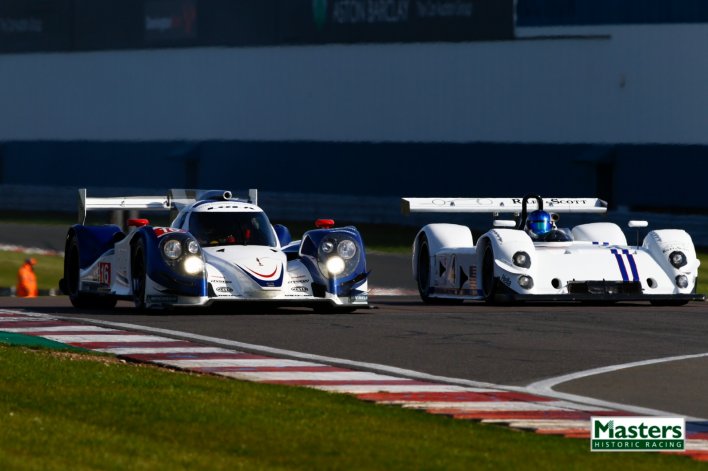 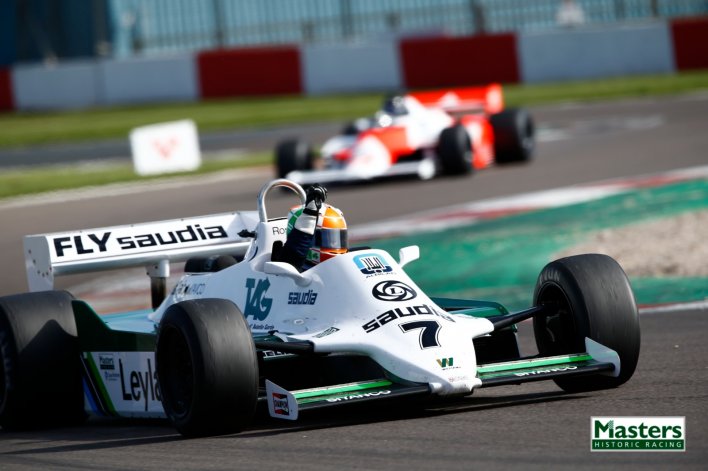 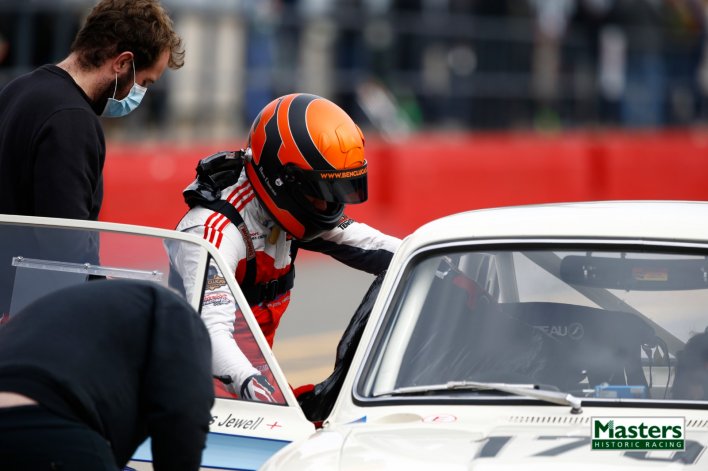 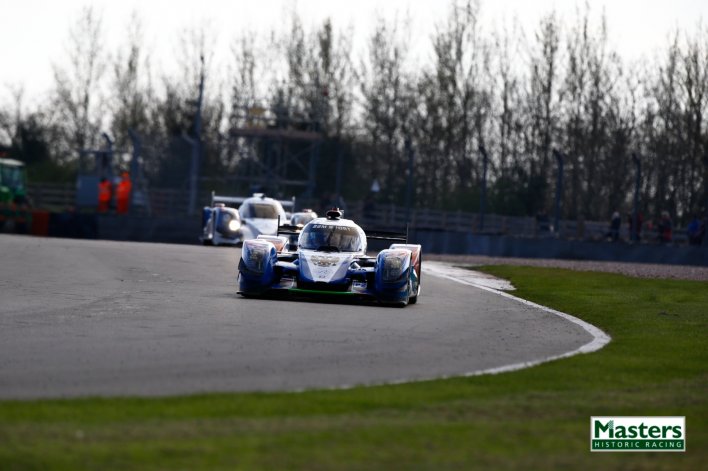 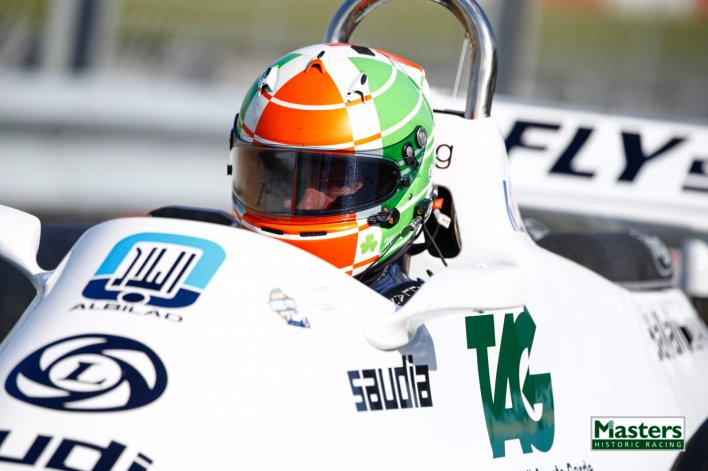 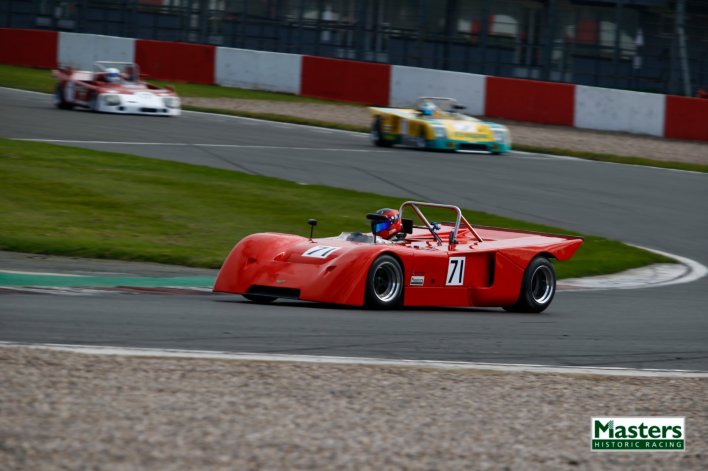 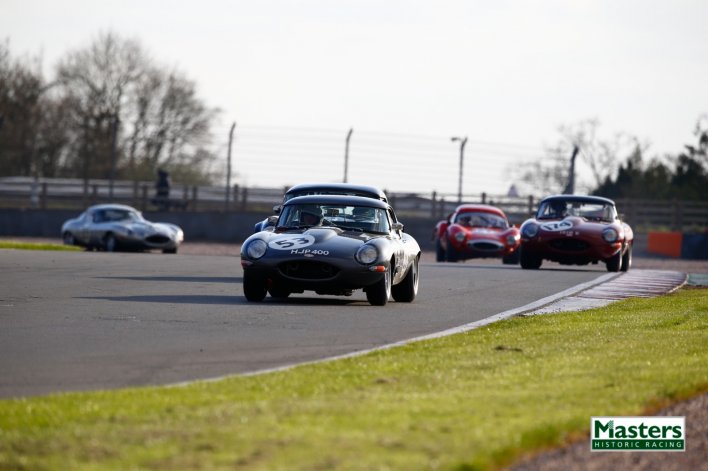 Steve Tandy took a hard-fought win by fending off everything that the BR01s of Jack Dex, Max Lynn and Shaun Lynn could throw at him. Taking the lead after the mandatory halfway pitstops, Tandy’s Lola B12/60 soaked up immense pressure for well over 15 minutes, the lead trio separated by less than a second lap after lap.

Ollie Hancock was an early star in Richard Cook’s Grand-Am and ALMS Riley & Scott MkIIIC but the car was thrown back by a jump-start penalty as well as an ‘elite driver’ pitstop penalty, while Mike Newton’s MG-Lola EX257 also featured strongly in the first half of the race, mixing it with the much newer BR01s and Tandy’s ex-Dyson Racing Lola.

As on Friday, Olly Bryant was the runaway leader in the GT class, followed by the Grand-Am Porsche of Tom Jackson and John Cockerton but the class turned upside down when Bryant retired his Trans-Am Ford Mustang GT-S1 while Jackson’s Porsche went off in a straight line at Redgate, having suffered from brake failure. Colin Sowter’s Ferrari 458 GT3 and Marcus Jewell’s Porsche 996 GT3 RSR consequently fought over the class win, with Sowter coming out on top.

As the field was let loose, Hancock wasted no time in passing Dex for second into Redgate and then surprised all by also jumping Max Lynn at Holly Wood for first! It soon proved that it wasn’t just for fun as the much older open-top Riley & Scott opened up a four-second gap on the younger Lynn. Hancock’s moves weren’t a fair cop, however, as he was deemed to have made a jump start.

Behind them, Dex had Tandy all over him but a botched move by Tandy on lap 4 helped a sly Newton to pip both and grab third ahead of Tandy and Dex. Lynn Sr was sixth, as Olly Bryant once more led the GT class in his Trans-Am Mustang GT-S1, again keeping ahead of Mike Furness in the P2 Courage LC75. Tom Jackson in the Grand-Am Porsche was next up, followed by Colin Sowter’s Ferrari 458 GT3 and Marcus Jewell in the Porsche 996 GT3 RSR.

Lots went on at lap 10, as Hancock came to serve his stop-and-go penalty just as Tom Jackson suffered a violent exit as Redgate, bringing out the safety car. Brake failure was the obvious cause for the Porsche’s demise. At the same time, Olly Bryant was seen limping into the pits with engine failure.

So now Max Lynn was the first car behind the safety car, trailed by Newton still punching well above his weight against Tandy’s newer P1 machine and Dex’s later P2 car. Shaun Lynn moved up into fifth while Hancock slotted back into the field in sixth, ahead of Richard Meins in the last of the BR01s. Sowter now led the GT class ahead of Jewell.

As the safety-car period endured, the pit window had opened, but none bar Tandy and then leader Max Lynn were taking the opportunity yet. Instead, Hancock was flying and in two laps had regained the lead from Newton. From third, Dex came to pit as well, leaving Hancock and Newton to come in at the next opportunity. Now S Lynn, Meins and Furness were the only ones left to pit, and they did just short of the pit window ending.

After the stops, the situation panned out with Tandy barely in the lead from M Lynn and Dex, the latter having produced fastest lap of the race. Newton trailed the leading pair by eight seconds while Richard Cook in the Riley & Scott started by Hancock had lost out in the pits by almost a minute, courtesy of the ‘elite driver’ time penalty for having Hancock in the car.

Now the fight was on for the final 12 minutes. Tandy still led but now had Dex breathing down the Lola’s rear wing, the two BR01s having swapped places. The battle was coming down to a veteran driver in an older P1 car against two young guns in newer P2 machinery. In their GT fight at the back, meanwhile, Jewell had got ahead of Sowter to lead by 1.2 seconds.

With five minutes to go, Shaun Lynn was eager to join the fun, as he set fastest lap of the race to close up to his son’s BR01 by less than three seconds. And then, Tandy got a big break as he lapped Meins in the fourth BR01 who then inadvertently baulked his teammates turning into the final chicane. Tandy’s breather was shortlived, though, as Dex cut his nine-tenths deficit to four tenths within a few corners.

Tandy’s Judd-powered grunt looked like saving him on the straight but the nimbler BR01s kept on closing in the Craner curves but then a small error by Dex into Macleans on the final lap was the decider – the win was Tandy’s. Behind Dex and his son, Shaun Lynn set another fastest lap of the race, with Newton taking fifth ahead of Meins. The Hancock/Cook Riley & Scott ended up seventh, while Sowter turned the tables on Jewell to take GT honours after all.