Werner, Padmore, Minshaw and Macedo Silva bag the spoils in the Algarve!

The sun may have been lacking during our European season-closer in the south of Portugal, but the Algarve Classic Festival certainly wasn’t lacking in atmosphere and old-fashioned Masters camaraderie.<o :p></o> 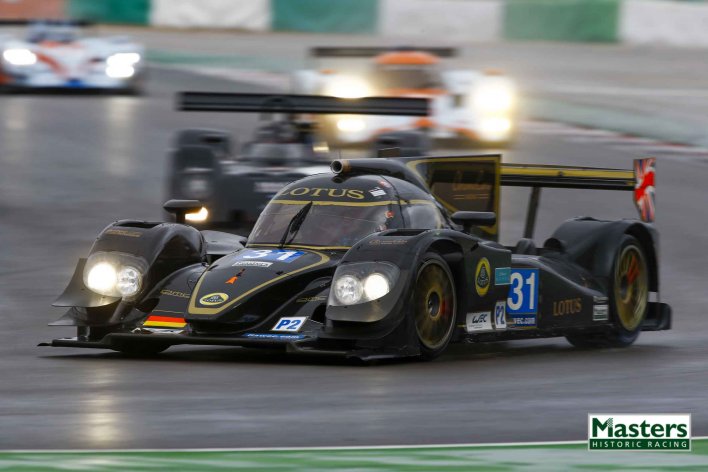 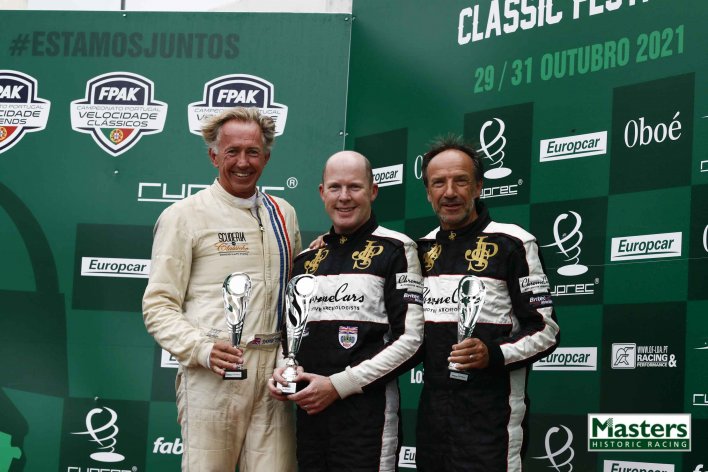 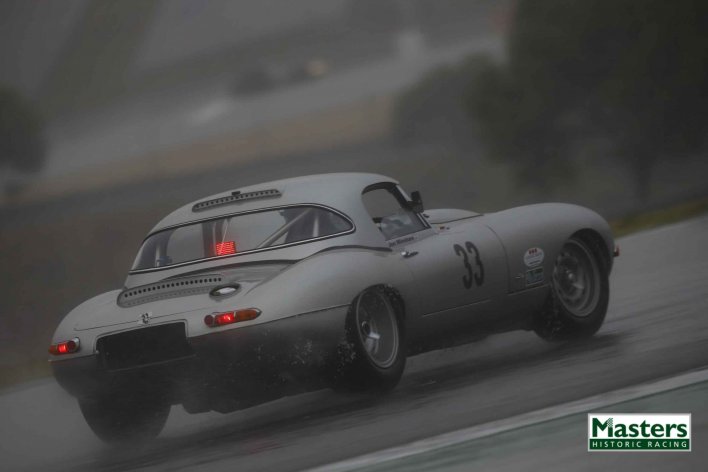 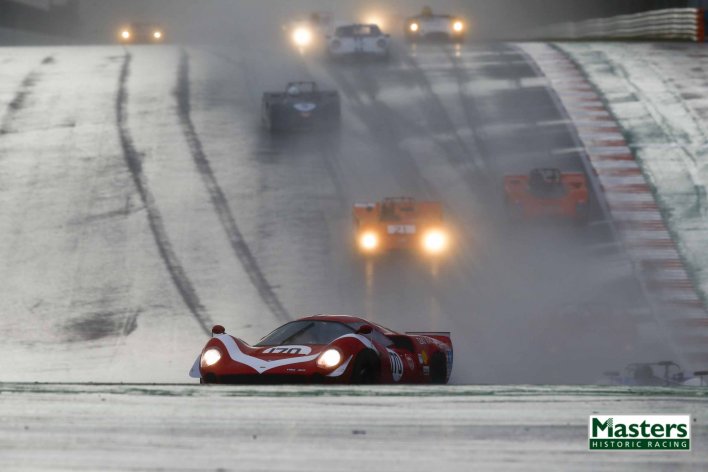 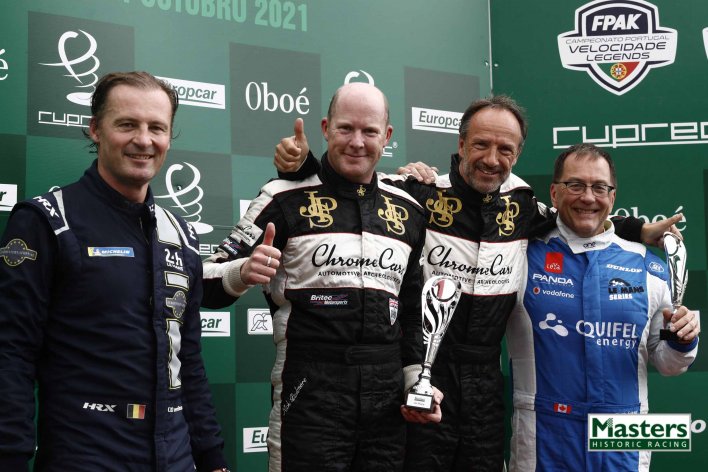 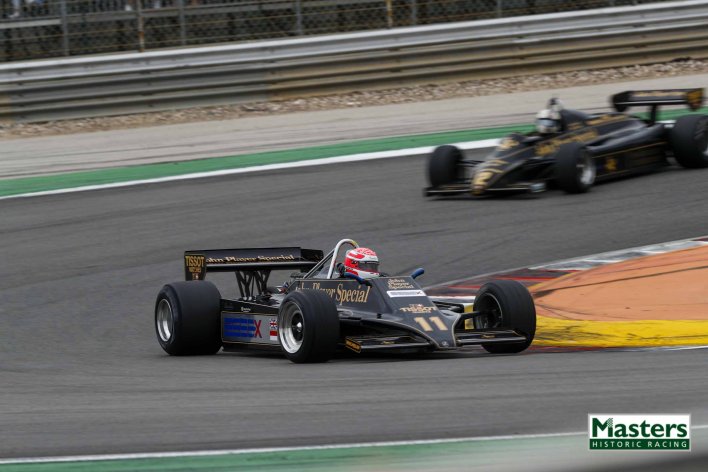 Marco Werner and Nick Padmore came through to take the spoils in a wet first Masters Endurance Legends race at the Algarve Classic Festival, as their Lola-Lotus B12/80 soon hit the front during a storming opening stint by Werner. Returning in second place because of the longer pitstop mandated by the pair’s elite-driver status, Padmore had to take the fight to Xavier Micheron’s Riley & Scott-Elan MkIIIC, the Frenchman having shone in the first part of the race by charging all the way up to second.

“The start was important”, said Werner about his efforts to make an early break. “We knew we had to counter our pitstop penalty. But the car worked perfectly, so here we are!”

“Marco basically built up a good lead”, said Padmore. “And I’m simply still learning and learning in this car. But Britec did a mega job on the car, so easy as that!”

Micheron’s surprise win on the slippery track wasn’t to be, though, as the Riley & Scott spun while attempting to clear multiple backmarkers in one go. This allowed Padmore through to take a comfortable victory behind the safety car that was called in the late stages after Jamie Constable lost control of his Pescarolo-Judd 01. Following his spin, Micheron had dropped back between Constable and Christophe d’Ansembourg’s Lola-Aston Martin DBR1-2, but fought back to reclaim second place from Constable whose own spin allowed d’Ansembourg to claim the final spot on the podium.

“I was passing three backmarkers”, Micheron explained. “There was so much spray, I couldn’t see anything and missed my braking point…”

“I’m quite happy”, said d’Ansembourg. “The rain is quite tricky with this car, as I found out at Spa, but we changed the setup and it was going fine here. I was really surprised by Xavier’s speed in the rain! I had a good fight with Jamie but then he spun – it was all about making no mistakes, and I was the one that didn’t make them.”

“I’ve only raced at Brands with this car this year”, said Meins. “But I know the track, I raced here in LMP3 with United Autosports a few years ago, even though you can’t compare this car with an LMP3 – I love this place, it’s very technical, very physical.”

On a very wet Algarve track, the field was sent on its way following a safety-car start two laps into the race. Immediately, Constable’s Pescarolo-Judd 01 broke away but behind him Xavier Micheron made up two places in his Riley & Scott-Oldsmobile MkIIIC to lead Christophe d’Ansembourg’s Lola-Aston Martin DBR1-2, while Keith Frieser dropped to fourth in the Zytek 09S. In fifth, Marco Werner had taken six places already, having started the Lola-Lotus B12/80 from 11th after its qualifying mishap.

The next time around, it was all change again, as an unstoppable Micheron had taken the lead from d’Ansembourg, Constable, Werner and Frieser, with Craig Davies moving up to sixth in the Ligier-Nissan JSP3-15 and James Hagan snatching seventh in the ORECA-GM FLM09, both at the detriment of Mark Higson’s ORECA-Nissan 03. Mike Newton had dropped to ninth in the MG Lola-AER EX257 while Richard Meins in the Aston Martin DBR9 led the GT category from Jason Wright’s Ferrari 458 GT3.

On lap 5, though, Werner had demoted Constable, then d’Ansembourg and then Micheron to lead by 0.8 seconds from the Frenchman. The first four were still separated by less than four seconds but Frieser had been dropped by the lead group to the tune of 17 seconds. In fact, Hagan and Davies – now having switched places – were chasing the Canadian hard. At the front, the small margins began evaporating soon, however, as Werner broke free from Micheron by four seconds, with d’Ansembourg trailing by another tick and Constable two more seconds behind the Belgian.

As the pit window opened, Werner led Micheron by close to seven seconds, d’Ansembourg by nine and Constable by 12. In the GT class, Meins held an eight-second advantage on Wright. On lap 8, Constable’s Pesca was the first to pit, as Werner and Micheron kept on banging in the 1.57 laps on what was still a very wet track – even though the rain had abated. Next time around, Werner lowered the mark to 1.55, easing away two more seconds from Micheron in the knowledge that he was forced to do a longer mandatory stop before co-driver Nick Padmore would be sent out.

On lap 9, d’Ansembourg was the next of the frontrunners to pit, and he was followed in by Newton, Higson, Meins and Wright. On lap 10, while Werner carried on for one more lap, Micheron, Frieser, Davies (handing over to Ron Maydon), Hagan (handing over to Chris Atkinson) and Mike Furness in the Courage-Judd LC75 were in.

On lap 12, when the pitstop smoke had cleared, Micheron led Padmore by six seconds, followed by Constable and d’Ansembourg contesting third place three more seconds down the road. Frieser was a lonely fifth, 40 seconds away from the leader, with Newton having grabbed sixth from Maydon. Meins had moved up into eighth as the leading GT car, while Furness was ninth and Wright leading Atkinson and Higson in tenth.

With a fresh drizzle arriving, lap times were going up again, but for the moment Micheron remained in charge, equalling Padmore’s lap times while increasing his lead over the two Gulf-liveried cars in third and fourth. On lap 15, though, the Frenchman spun away his lead to let Padmore through and slotting in between Constable and d’Ansembourg. Further back, Furness spun and dropped to last.

Padmore now fully in control, he brought home the overall and P2-class win for himself and Marco Werner, while Micheron fought back to reclaim second from Constable. Even worse for the latter, Constable spun his Pescarolo at the start of lap 17 while blocking the track as a result, leaving the race to finish under the safety car. D’Ansembourg had dropped away  from Constable in the latter stages but now inherited third ahead of Frieser, Newton, Maydon, and Richard Meins in the winning GT car. Higson, Atkinson and Wright rounded out the top-ten.