Masters thrills the crowd at the Algarve Classic Festival

Six exciting Masters races with six different winners made sure the spectators at the Algarve Classic Festival had some great racing entertainment!  The abundance of sunshine during the weekend helped turn the Hawaiian-themed final day of racing into a great success, with drivers, team members and Masters crew all contributing to the fun. 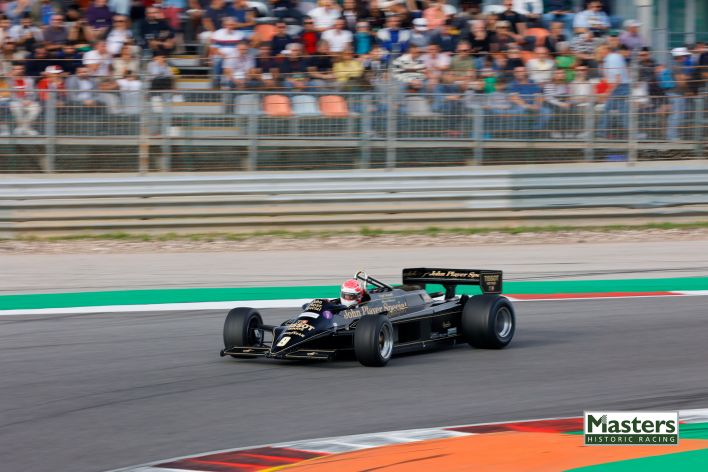 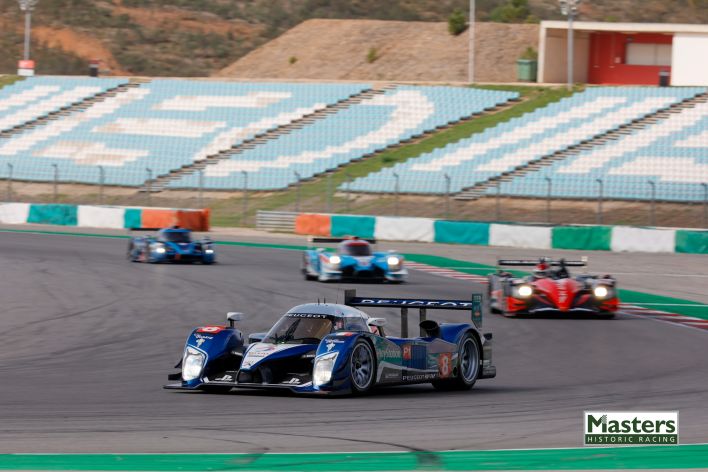 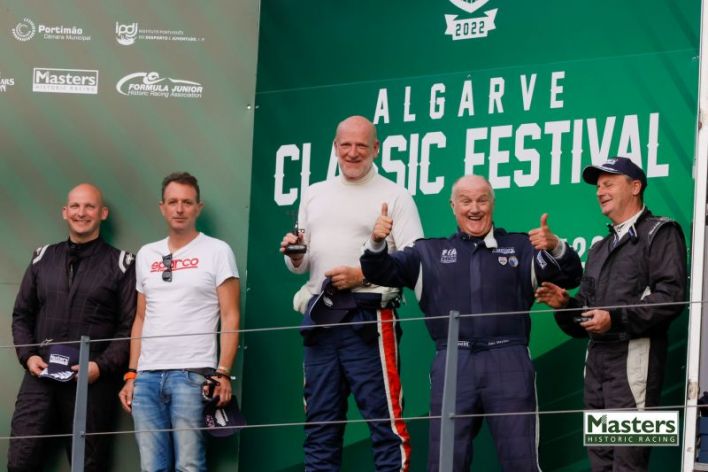 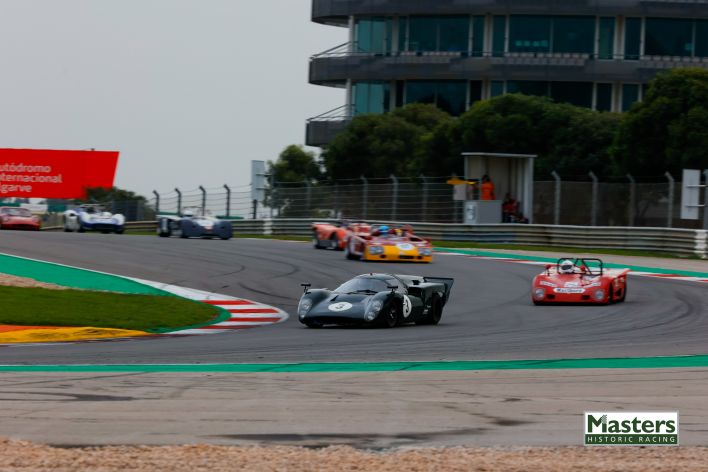 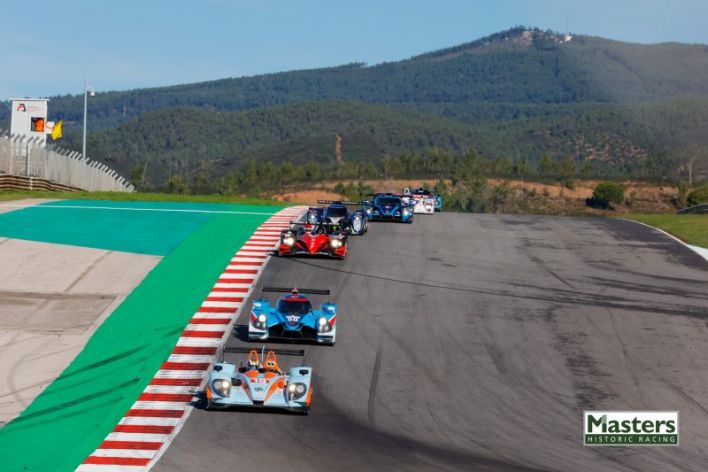 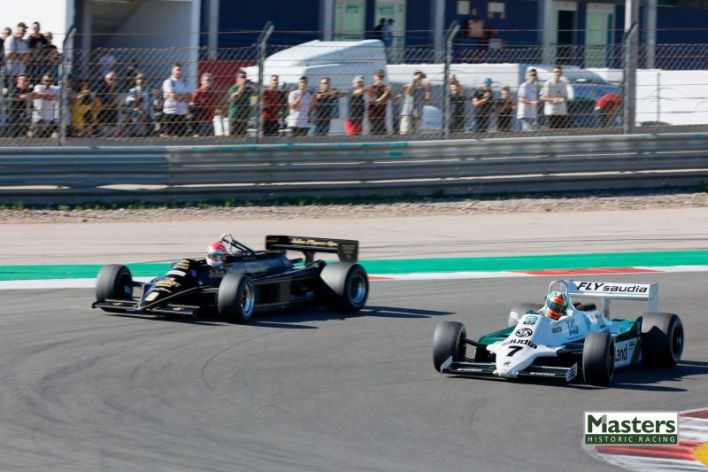 Marco Werner came home victorious in the first Masters Racing Legends race of the Algarve Classic Festival, when a five-second time penalty for track limits demoted on-the-road winner Mike Cantillon to second place. Werner’s Lotus 87B had led almost the entire race but was forced to succumb to a late charge by Cantillon’s flying Williams FW07C. Keeping the gap to 2.6 seconds, however, was enough for the German to still claim victory.

Martin O’Connell chased Werner early on but his Williams FW08C dropped back behind Steve Hartley’s McLaren MP4/1 before the McLaren retired on lap 8. Cantillon soon followed Hartley through and found himself in second place and setting much quicker lap times than Werner in the lead. Two laps from the end, the Irishman surged into the lead but he was unable to create the five-second gap necessary to hold on to the win. Behind O’Connell, Lukas Halusa took his Williams FW08 to fourth.

“Initially, I was fine”, said Werner about the gap that he opened up to O’Connell. “But then the front went down a bit, and I suffered from understeering. Fortunately, it was close enough with Mike to still get the win. So you see – never give up!”

“To be honest, I didn’t know that I had been exceeding track limits”, said Cantillon. “It was an exciting race, I had great pace, and I’m a happy second!”

“I wanted to do a race”, said O’Connell about his guest performance in Mark Hazell’s Williams FW08C, “and I always wanted to race that car. It has so much history. But I wasn’t quite fast enough. I did what I could but there was just not enough speed.”

Meanwhile, Patrick d’Aubreby promoted his pre-78 class title chances by finishing a strong fifth overall and keeping the warring Mark Higson (McLaren MP4/1B) and Marc Devis (Lotus 78) between himself and title rival Jonathan Holtzman in the Tyrrell P34. Recovering from a pitstop, Niklas Halusa took third in class in his McLaren M23.

“It’s not done yet!” said d’Aubreby about his lifting his title chances. “Tomorrow will be the decider…”

Holtzman agreed with that: “I’ve never been here before, and in first practice we had lots of problems with the throttle. Then in qualifying the shifter broke. But in the race the car was pretty good, and I got into the 45s. So tomorrow we will go for the win!”

“My earplug fell out!” said Niklas Halusa about the reason for his pitstop. “I know, it’s not the most sensational reason, but when you’re tenth, you don’t want to be ambitious with your hearing…”

On a pleasant Saturday morning in overcast conditions, the Masters Racing Legends Formula One cars rolled out to have their first race of the weekend. Sadly, Steve Brooks was unable to participate, the Cosworth in his Lotus 91 having cried enough during qualifying. After a slight delay caused by oil on the track from a previous race, Marco Werner’s Lotus 87B jumped into the lead, chased by Steve Hartley’s McLaren MP4/1, but halfway into the opening lap Martin O’Connell found a gap to stick the Williams FW08C into to take second.

After a blistering opening salvo, Werner led O’Connell by 1.8 seconds, who in turn was followed by Hartley, Mike Cantillon’s Williams FW07C, Lukas Halusa in the Williams FW08, Patrick d’Aubreby in the pre-78 class-leading March 761 and Mark Hazell’s Williams FW07B. Mark Higson was up next in the McLaren MP4/1B, the Briton leading Marc Devis (Lotus 78) and the other pre-78 runners led by Niklas Halusa (McLaren M23) and Marco Fumagalli (Theodore TR1), with Jonathan Holtzman (Tyrrell P34) up next. Behind the American came Arthur Bruckner’s Arrows A6.

At the front, Werner saw his lead diminish to 1.4 seconds over the next two laps, and behind O’Connell, Hartley and Cantillon were closing up too, Cantillon setting the fastest race lap on lap 3. Halusa (L.) was five seconds down on the Irishman, after which a big gap opened up to d’Aubreby and Hazell, the latter passing the Frenchman into lap 4.

Now Werner began to give it some additional stick, the German increasing his lead over O’Connell back to 1.9 seconds, while Cantillon was still worrying Hartley, as the top four were still less than four seconds apart. Halusa was in no man’s land in fifth while Hazell moved away from pre-78 class leader d’Aubreby who was taking good care of his title chances, as his rival Holtzman was down in fourth in class, chasing Halusa (N.) and Fumagalli.

As Werner inched away to a 3.3-second lead, the cars in P2, P3 and P4 were now nose to tail, split by a mere five tenths. Meanwhile, further back, Niklas Halusa reported to the pits, allowing Fumagalli and Holtzman to move up a place in the pre-78 class.

On lap 7, the order in the top four remained unchanged but Werner was now 4.2 seconds up the road as O’Connell continued to defend from Hartley and Cantillon, the fight allowing Lukas Halusa to inch closer again. Further back, Mark Hazell was hit with a stop-and-go penalty for a starting procedure infringement while Steve Hartley was given the warning flag for exceeding track limits – from now on, the McLaren driver would have to tread more carefully.

Instead, though, he was up into second place on lap 8, having finally pipped O’Connell! But then, as Cantillon also passed O’Connell, disaster struck and the McLaren was seen pulling off at turn 8… So now, Cantillon was up into second in one clean sweep, as Lukas Halusa was preparing himself for an intra-Williams FW08 fight with O’Connell, the Austrian having hit a top speed of 272 kph on the straight. Behind them, d’Aubreby was back past Hazell to find himself in fifth overall. On the fringe of the top ten, Holtzman had got by Fumagalli to take second in the pre-78 class. A lap later, the Italian would return to the pits with an issue. Soon after, Hazell came in to serve his penalty.

With six minutes still to go, Werner was anything but safe. Cantillon was setting fastest laps of the race, and had soon cut the German’s lead from 4.5 seconds to 1.8 seconds in just two laps. However, Cantillon had done so by cutting track limits one time too many, and he was handed a five-second time penalty. The Irishman was now right on Werner’s tail, but would not only need to pass the German but open up a big enough gap to his rival as well. Going into lap 13, Cantillon indeed moved into the lead, but with just two-and-a-half minutes remaining, it would be tight.

As the final minutes ticked away, Cantillon took a 2.4-second lead on the ailing German, but would he be able to repeat the creation of a similar margin on the final lap? No! The gap stayed at 2.6 seconds to hand Werner back the win. O’Connell kept Halusa at bay for the final podium spot, while d’Aubreby drew first blood in the pre-78 title race by taking a strong fifth overall, with Higson and Devis separating him from Holtzman in eighth. Hazell, the returning Niklas Halusa and Arthur Bruckner were the remaining finishers.