Hartley, Halusa and D’Ansembourg split the honours at Barcelona

Steve Hartley, Lukas Halusa and Christophe d’Ansembourg set the wheels in motion for the 2022 Masters European Tour by winning in the season opener at Barcelona, as Masters added their Masters Racing Legends and Masters Endurance Legends to the programme of the Espíritu de Montjuïc event. 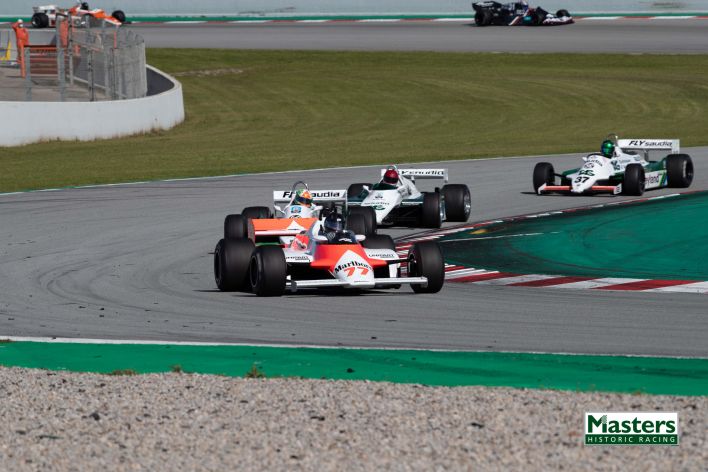 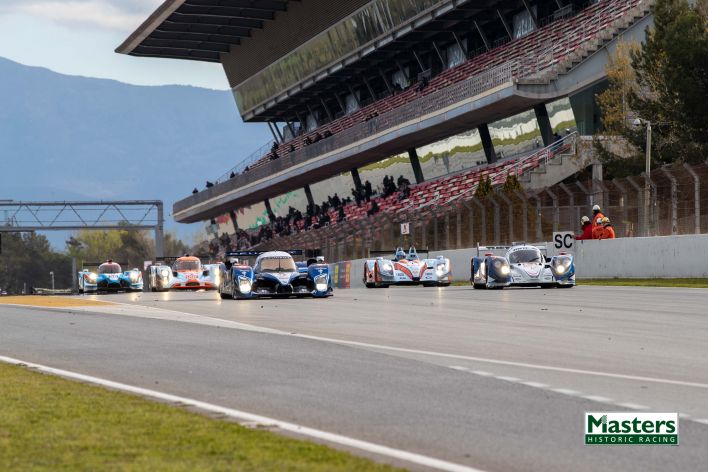 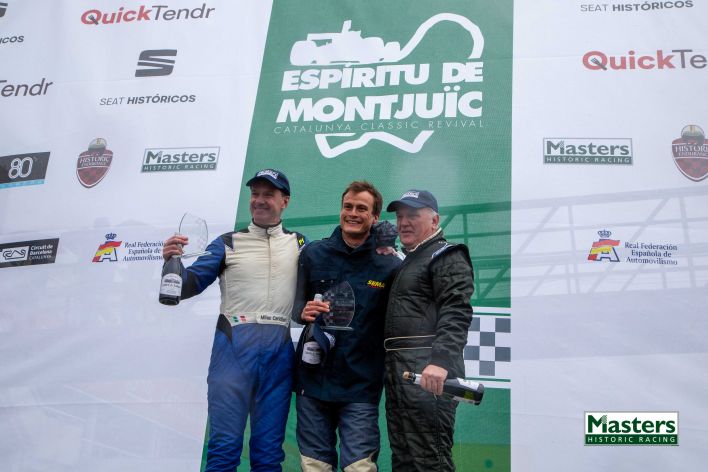 Despite leading from start to finish, Steve Hartley was having to keep an eye on his mirrors for the entire 15 laps of the first Masters Racing Legends race for 1966-1985 Formula One cars at Barcelona. The McLaren MP4/1 driver was chased all the way by fellow front-row starter Mike Cantillon’s Williams FW07C but kept his nerve to win the first race of the 2022 Masters season.

“I could tell you it was pretty easy but it was hard work!” said a jubilant Hartley about his race in the carbon fibre McLaren now run by Anthony Seddon Racing. “This is my first time here, and you can’t practice for this. I didn’t think I’d win, I thought it would be one of the young guys, but there it is – new team, first win!”

“I was hoping he would make a mistake – but he didn’t”, said Cantillon. “There were only a couple of backmarkers, so fair play to him, he never cracked under pressure.”

In third, Lukas Halusa looked a threat in his new mount, his Williams FW08 momentarily dropping down to fourth but soon reclaiming third, in the process setting fastest lap of the race and closing on the two leaders. Towards the end, though, the Austrian was forced to let Hartley and Cantillon go again.

“I think so!” said Halusa about overcooking his tyres as the reason for dropping back at the end. “I had trouble passing a backmarker, and after that I thought, I’ve cooked my tyres, let’s just try to make it to the end.”

Christophe d’Ansembourg (Williams FW07C) took a distant fourth ahead of Steve Brooks (Lotus 91) and the uncontested post-82 class winner Mark Hazell in the Williams FW08C. Seventh and dominating the pre-78 class was Frenchman Patrick D’Aubréby whose March 761 led all the way to win from James Hagan in the Hesketh 308. Hagan fought Jonathan Holtzman’s Tyrrell P34 for second in class, and when the six-wheeler retired, Peter Williams (Lec CRP1) inherited third in class to crown a fine debut.

“I felt comfortable”, said a happy D’Aubréby. “The car was nice, and I actually took it easy!”

“I tried to keep him honest”, said Hagan about passing Holtzman, “and then I caught and passed him on the straight. It’s always nicer if you can race someone.”

“Yes, my first time in Formula One!” said a surprised Williams. “And getting a podium is unexpected! The last few laps were quiet, getting out of the leaders’ way, but my fight with Bob Blain in the March was entertaining: I left him in my mirrors!”

With a chilly breeze but in sunny conditions, the field got going for their first 25-minute race of their season-opening weekend, as Hartley duly converted pole into a first-lap lead over Cantillon of 0.8 seconds. D’Ansembourg was third in the second FW07C, already three seconds down, and was chased by Halusa, with Brooks and Hazell forming another pair two further seconds adrift.

In seventh, D’Aubréby led the pre-78 class, the Frenchman keeping his countryman Vincent Rivet in the March 811 between himself and class rival Jonathan Holtzman in the Tyrrell P34 six-wheeler, who in turn was chased by James Hagan in the Hesketh 308. Outside the top-ten, Mark Higson debuting his McLaren MP4/1B was eleventh ahead of Peter Williams in the Lec CRP1, David Abbott in the Arrows A4, Rob Blain in the March 761 and Michel Baudoin having swapped his Hesketh 308E for a March 821.

The next lap, Hartley’s lead was up to 1,2 seconds, but on lap 3 Cantillon put in a blinder to close right up to his McLaren rival. Halusa, meanwhile, had passed D’Ansembourg for third, the Austrian thus reclaiming his starting position. On lap 4, however, Hartley punched back to reinstate his one-second lead over the Williams. Halusa now found himself four seconds adrift of Cantillon but six seconds up on D’Ansembourg, with Brooks and Hazell still contesting fifth place 17 seconds behind the leader.

In the back, Baudoin had pitted his March while Abbott dropped back to 14th, as D’Aubréby was now some ten seconds clear of Holtzman, who had managed to pass Rivet for eighth overall. Soon, Hagan was through as well and chasing Holtzman for second place in the pre-78 class.

Seven laps into the race, Hartley was inching away from Cantillon ever so slightly, his lead now up to 1.4 seconds. Behind them, though, Halusa was the fastest man on track, setting fastest lap of the race and closing in on both of them. D’Ansembourg was still a lonely fourth but Brooks and Hazell were anxious to keep him company.

Next time, around Hartley led Cantillon by 2.1 seconds, and the Irishman now had to worry more about Halusa catching him, rather than entertaining thoughts about relieving Hartley from the top. In the pre-78 class, D’Aubréby maintained his nine-second advantage over Holtzman and Hagan – but on lap 9, it was Hagan and Holtzman, as the Irishman had taken eighth from the American. Indeed, on lap 10, the Tyrrell was into the pits, which meant that third in class now belonged to Peter Williams in the Lec.

In this finely poised race, the smallest error could prove to be decisive, and a sub-par lap 9 from Hartley saw Cantillon close back up to within a second of the ‘Jam Baron’ in front, with Halusa losing ground on the Williams FW07C driver. The status quo remained after 11 laps, but two more laps and it had become obvious that the Austrian was unable to stay with the two leaders, now separated by a mere four-tenths, as Cantillon gave it one final go.

However, as lap 15 approached, the final lap of the race, Hartley was markedly further up the road again, and so was able to cruise to victory in the first race of the season. Cantillon was second, 1.7 seconds down, while Halusa finished third, trailing Cantillon by some six seconds. D’Ansembourg took fourth, 42 seconds adrift of the winner, followed closely by Brooks and post-82 class winner Hazell. D’Aubréby completed his lights-to-flag victory in the pre-78 class, leading home Hagan, with Higson and Rivet splitting the Frenchman and the Irishman from Peter Williams, who took a distant third in class.