After a two-year break, we are headed back to the newly upgraded Zandvoort Circuit for the Historic Grand Prix. This nostalgic racing event offered a sunny, vibrant and fun atmosphere for a weekend of great historic racing. 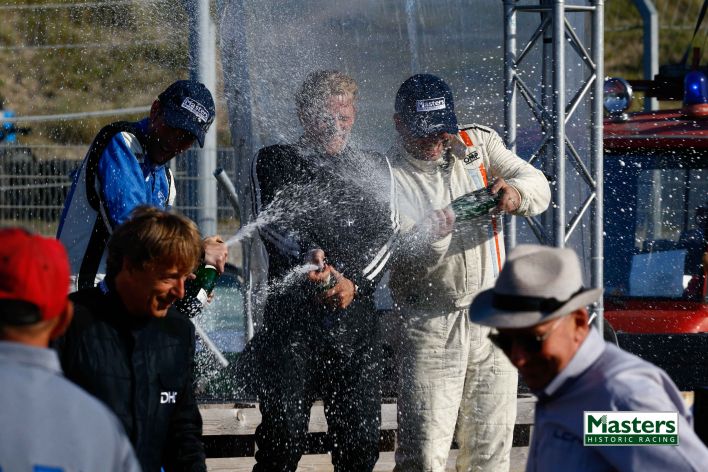 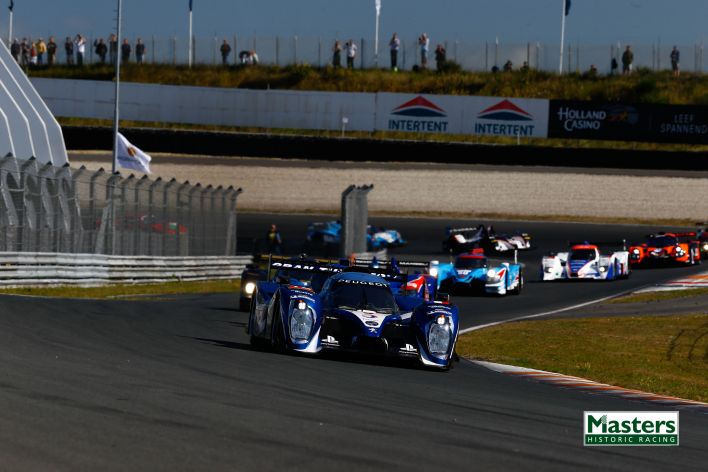 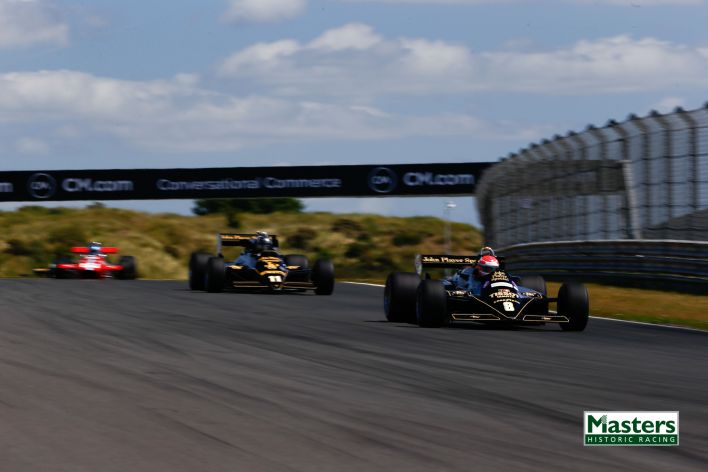 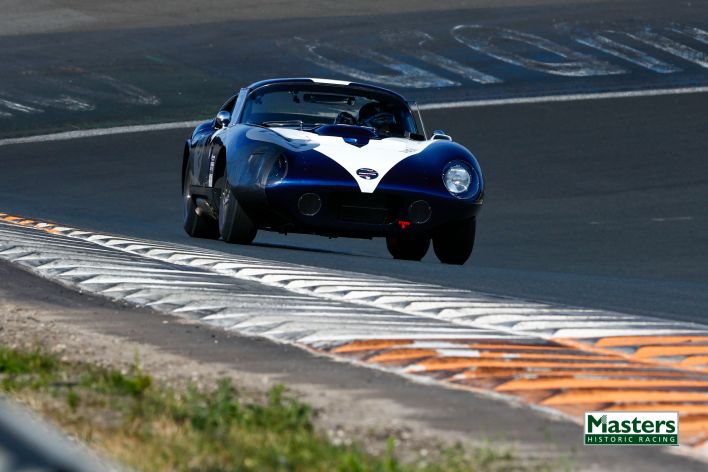 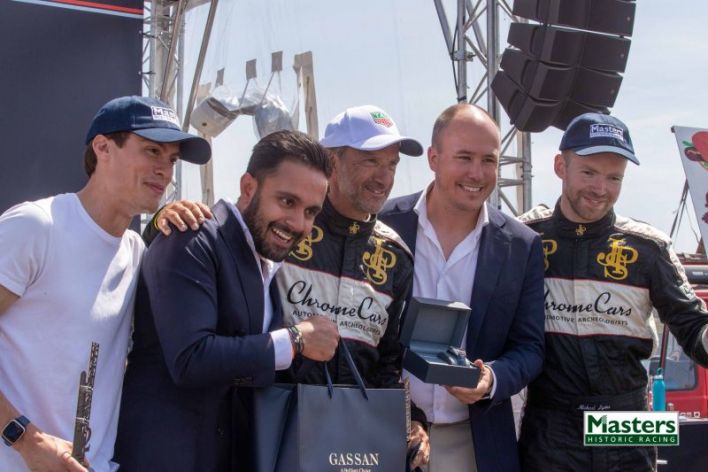 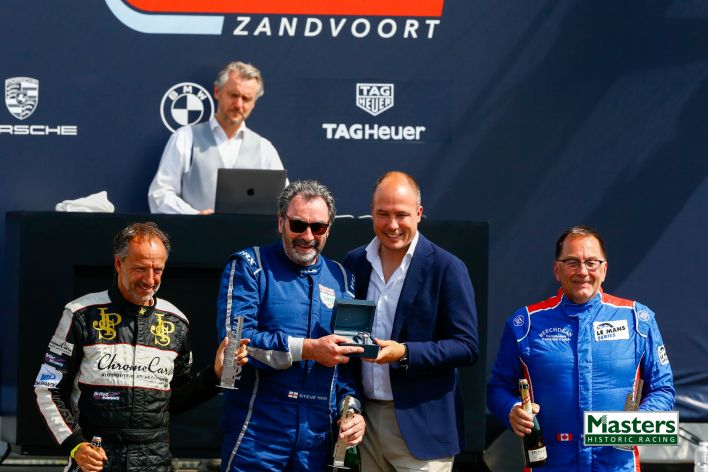 Home heroes David & Olivier Hart won the Masters Sports Car Legends at Zandvoort by hunting down the pole-sitting Chevron B19 of Tom Bradshaw to win by 5.4 seconds. In the opening half of the race, David Hart failed to let Bradshaw out of his sight, partly helped by a safety-car period at around a quarter distance, after which son Olivier chased the Chevron hard to finally make a successful pass for the lead with less than minutes to go.

“It was brilliant, I’m very happy with my race”, said Olivier Hart. “We had just put in a new engine with more torque, so that made the car really quick. I was able to consistently lap in the 1.43s to close the gap to Tom, but then I began to suffer from understeer, and the downshift from third to second was giving me some trouble. For a moment, I thought I wasn’t going to pull it off but I knuckled down, got into a rhythm again, and then I got him.”

“I loved it!” said Bradshaw. “After our recent issues, it was good that we got the car to the finish without any issues. I pushed all the way, but he was quicker. But as I’ve said before, it’s sometimes more satisfying to lose a hard-fought race than to win by a mile.”

In another Chevron B19, Mark Hazell and Martin O’Connell took a distant third, the pair moving up a place once Lukas Halusa’s Alfa Romeo 33TT3 retired from the race with a throttle issue. Also profiting from cars dropping out – including the Steve Brooks/Martin O’Connell T70 Mk3B and the Marc & Mathias Devis Chevron B19 – were Julian Thomas and Calum Lockie whose modest Bonnier-class-winning Chevron B8 managed to clinch fourth place ahead of John Sheldon’s Chevron B16.

“Apart from sitting behind the safety car I had an entertaining race”, said Hazell, before O’Connell continued, “It was all good, but for me it was a bit lonely…”

In the pre-66 Hulme class, Richard McAlpine (McLaren M1B) led the first 20 minutes of the race before Chris Jolly passed him after the safety-car restart to hand a class-leading Cooper Monaco T61M to Steve Farthing who subsequently ran home to the win. In ninth overall, the Christopher Stahl/Michael Lyons Ferrari 365 GTB/4 Daytona lifted Pescarolo class honours.

“It was me versus these two!” said McAlpine about the fight he put up against Jolly and Farthing. “I came out just behind the safety car but if I’d been ahead of it, it would have been game over!”

As it was, Jolly passed McAlpine right after the safety car had gone. “I got a bit of momentum, and I was through.”

Closing the curtains on a fantastic Saturday at the Historic Grand Prix, the Masters Sports Car Legends got going with Bradshaw’s Chevron B19 leading away from David Hart in the Lola T70 Mk3B, with Lukas Halusa up next in the Alfa Romeo 33TT3. Gans was fourth in his Lola T290, while Steve Brooks had moved up a place in his T70, demoting Julian Lockie’s little Chevron B8. In ninth, Richard McAlpine led the Hulme pre-66 class in his McLaren M1B, with Chris Jolly in 12th overall in the Cooper Monaco T61M shared with Steve Farthing.

On lap 2, Marc Devis in the Chevron B19 also passed Thomas, with Mark Hazell’s Chevron B19 passing John Sheldon’s Chevron B16 for eighth, but Thomas was back up into sixth on the next lap while Felix Haas was into the pits with a misfire hampering the German’s Lola T210.

At the front, Bradshaw left Hart Sr trailing by 2.8 seconds, with Halusa a further 1.4 seconds adrift on lap 3. On the next lap, the Chevron had increased its lead to 3.5 seconds, but it would soon be reduced to zero, as the safety car was called after Michael Gans’ T290 came to a halt in an unsafe position at the back of the circuit. The American’s demise promoted Brooks up to fourth, with Devis, Thomas, Hazell and Sheldon up next. Georg Hallau had hauled his T212 up to ninth, while McAlpine still led the pre-66 class in tenth overall, ahead of Jolly and Thomas Matzelberger in another T210. In 13th, Christopher Stahl tried to keep up with the prototypes in the only GT car in the field, the Ferrari 365 GTB/4 Daytona still keeping together after a troubled qualifying session.

The field was given the green flag at the start of lap 8, 19 minutes of the race gone, with Hart wide awake as he immediately put the pressure on Bradshaw in the lead. However, the youngster wasn’t sleeping either, as he pulled out a 1.2-second lead during the lap. However, while Halusa was still third, Brooks had disappeared from fourth, as the Lola came into the pits, followed in by Hallau who seemed in similar trouble, the German retiring his T212 with handling issues. This elevated Devis to fourth, followed by Thomas, Hazell and Sheldon, while Chris Jolly had jumped McAlpine for the lead in the pre-66 class.

The pit window now two minutes away, Bradshaw increased his lead over Hart to 4.6 seconds on lap 11, but further back Marc Devis was in trouble, the Chevron B19 having pulled off at the exit of Tarzan. This promoted Thomas to fourth and Hazell to fifth just before the pit window actually opened.

Matzelberger was the first to come in, handing over to fellow Austrian Ingo Strolz, immediately followed by Hazell, who was relieved by Martin O’Connell, as the rest continued for at least another lap. On lap 14, Hart Sr changed places with son Olivier, as Halusa also came in for his mandatory stop. Soon after, Stahl entered the pits to hand the Ferrari Daytona to Michael Lyons. While Bradshaw stayed out, both pre-66 contenders came in at the same time, Jolly handing over Farthing. At the same time, Thomas gave the Chevron B8 to Calum Lockie, with John Sheldon also taking his mandatory stop.

From third, however, Halusa wasn’t in a hurry to leave the pits, an issue with the throttle metering unit keeping the Alfa Romeo in the pits, before the team decided to retire the 33TT3 for good. At the end of lap 16, Bradshaw was the very last to pit. When he rejoined, he still had three seconds in hand, but the race was on – Olivier Hart was already setting purple sectors in his chase of the Chevron. O’Connell was third, ahead of Lockie and Sheldon, trailing Hart Jr by 33 seconds. Steve Farthing led the pre-66 class, now 16 seconds clear of Richard McAlpine, the two cars had risen to sixth and seventh overall, ahead of Strolz and Lyons.

With 20 minutes of the race still to run, a finely poised race between two very talented youngsters ensued – Hart Jr eeking closer with one to two tenths per lap. With O’Connell not quite able to match their times, the second B19 in the field was losing ground to the leaders but enlarged his advantage to Lockie, Sheldon and the rest of the field. Meanwhile, Lyons was into the pits with the Ferrari, the race set to lose one more car, but it returned five laps down.

On lap 22, Bradshaw’s advantage had been cut to six tenths, as the battle for the lead intensified even further. On the next lap, it was a single tenths as both cars thundered side-by-side towards Tarzan. O’Connell was a lonely third, now 38 seconds down. On lap 24, however, Bradshaw’s lead was back up to seven-tenths, Hart not having made the pass stick. Next time around, it was five-tenths, as Hart tried to close back up again. Further back, Farthing had increased his lead over McAlpine to 28 seconds.

On lap 26, with less than ten minutes go, both leaders were side-by-side again on the main straight. Next time around, the gap was the same but the order had been reversed: Hart now led the race. The race was now all about the top two, as O’Connell, Lockie, Sheldon, Farthing and McAlpine were all-in races of their own. Hart extended his lead to 1.6 seconds on the next lap, with Bradshaw seemingly having been forced to give way.

Five minutes remained on the clock, in which Hart steadily grew his lead to 5.4 seconds at the chequered flag. Trailing Bradshaw by 51 seconds, O’Connell was third, with Lockie a lapped fourth and Sheldon fifth, two laps down. In sixth overall, Chris Jolly and Steve Farthing cornered the pre-66 class win, finishing 46 seconds in front of McAlpine. Next across the line were Strolz, Lyons and a very much delayed Felix Haas.