Thank you to HSR for allowing us to publish their race reports. You can find more details at www.HSRRace.com. 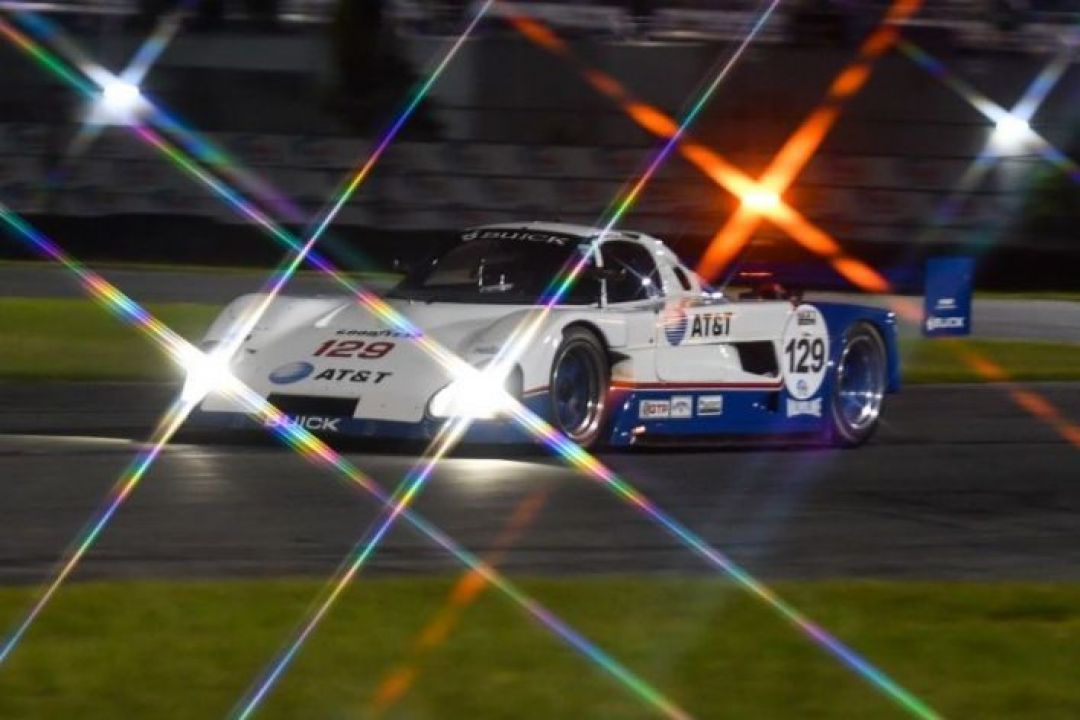 The action in the combined Run Groups C and D rounds stood out as two of the most exciting and dramatic races on the weekend. Cal Meeker turned in the comeback performance of this year's HSR Classic 24 with a no-quit drive to take overall Group C honours in his 1987 No. 129 Spice SE87L. After falling six laps down due to an issue in Saturday afternoon's opening session, Meeker steadily moved back up to the front in the remaining three Group C races. He made up the final two laps in the last round to move into first place with only a few minutes left on the clock to seal his first HSR Classic Daytona 24 victory.

The accompanying Group D race was equally thrilling as some quick and immaculately-prepared GT machines upset the Prototype ranks for the second-straight year. The overall victory went to the Iconic Racing 2003 No. 163 Saleen S7-R of Gérard Lopez and former Le Mans 24 Hour winner Éric Hélary. It was the first HSR Classic Daytona victory for Hélary and the Saleen team while Lopez picked his second Classic 24 win to go with his Group A victory in 2017.

The Saleen's biggest challenger was the big-bore 1993 Chevy Camaro R&S of Kenny Bupp and Jordan Bupp. The Bupp Motorsports team restored the Camaro to the exact specifications and livery of Riley & Scott GT/Trans-Am Chassis No. 26 that was co-driven to the American GT (AGT) class win in the 2001 Rolex 24 At Daytona by Kenny Bupp and three co-drivers. The team nearly pulled off a repeat win 21 years on but ultimately crossed the finish line just over 40 seconds behind the Saleen.

Group E produced another dramatic finish tinged with huge heartbreak for the Hudson Historics 2014 No. 33 Corvette Daytona Prototype of John Reisman and Eric Curran. The overall and GT Group E victory went to the Turner Motorsport 2010 No. 96 BMW Z4 GT3 of Vincent Barletta and Robby Foley who inherited the lead and ultimate overall victory just seven minutes from the end of the fourth and final Group E round Sunday morning.

Reisman and Curran were cruising with a two-lap cushion after dominating Group E from the start but slowed with an overheating engine just a few laps from the finish to give the win to the quick BMW. Barletta and Foley won in GT for the second year in a row but the overall Group E win was the first in "HSR Classics" competition for both drivers and the Turner Motorsport team.

Reisman, Curran and the No. 33 team were still credited with the Group E Prototype class win that served as some consolation for the late-race disappointment.

Group B saw one of the most dominating drives in this year's HSR Classic 24 by a familiar team and drivers that know how to win in HSR Classics competition. The Phil Reilly and Co. 1974 No. 26 Chevron B26 of Gray Gregory, Ethan Shippert and Randy Buck swept all four Group B rounds and sealed a record sixth HSR Classics race win. The victory was the second for the No. 26 team and drivers in the HSR Classic 24 to go along with their 2020 win at Daytona, and they also secured four-straight HSR Classic Sebring 12 Hour Group victories from 2017 to 2020.

Recently crowned IMSA WeatherTech SportsCar LMP2 Champion John Farano continued to roll in 2022 with an HSR Classic 24 victory in Group F in his 2018 No. 81 Oreca 07 4200. Farano evenly split the four Group F race wins with the GMT Racing 2007 No. 18 Pescarolo 01 Judd of reigning class winners Juan Gonzalez and Butch Leitzinger, but the No. 81 team and Farano skillfully managed the clock to stay on top of the overall standings from the opening round on. The No. 18 Pescarolo team finished first in rounds two and four but some lost time in race three that they could ultimately not make up.

Group G produced another first-time winner and a run that joined the No. 26 Chevron team's trouncing in Group B as the most dominating performances of the weekend. Enrique Munizaga convincingly swept all four Group G rounds in his Apex Motorsports/Hudson Historics 2006 No. 086 Porsche 997 Carrera C2. The victory was Munizaga's first in three HSR Classic Daytona attempts and came in a collaboration between his Apex team and the top-tier Hudson Historics operation.

All seven Run Group overall winners were presented with special-edition HSR Classic Daytona 24 Hour B.R.M. Chronographes watches. Additionally, the top finishing GT entries in the majority of the Groups were awarded B.R.M. Chronographes. The GT winners included Jack Refenning and Brady Refenning in their 901 Shop 1966 No. 241 Porsche 911 (Group A), Angus Rogers and Kevin Wheeler in the KMW Motorsports 1973 No. 15 Porsche 911 RSR (Group B), Alan Benjamin and Barry Waddell (Group C) in Benjamin’s 1992 No. 21 Porsche 964 USA Cup and Foley and Barletta who doubled up on B.R.M. Chronographes this weekend by adding a Group F GT victory in the Turner Motorsport 2016 No. 96 BMW M3GT3 to their overall win in Group E.

Reisman and Curran were presented with a B.R.M. Chronographes timepiece as the highest finishing Prototype in Group E. The Group D Prototype B.R.M. Award went to Todd Sloan in his 2006 No. 39 Riley Mk XX Daytona Prototype. Sloan prevailed in a race-long battle with several other Riley prototypes and sports racers that provide a fitting on-track competition tribute to Riley Technologies that was the Official Marque of the 2022 HSR Classic Daytona presented by IMSA.

Next up for HSR is the HSR Classic Sebring 12 Hour presented by the Alan Jay Automotive Network that takes place November 30 - December 4. The weekend also includes the season-ending HSR Sebring Historics that will close the curtain on HSR's full-season 2022 championships. Learn more at www.HSRRace.com.