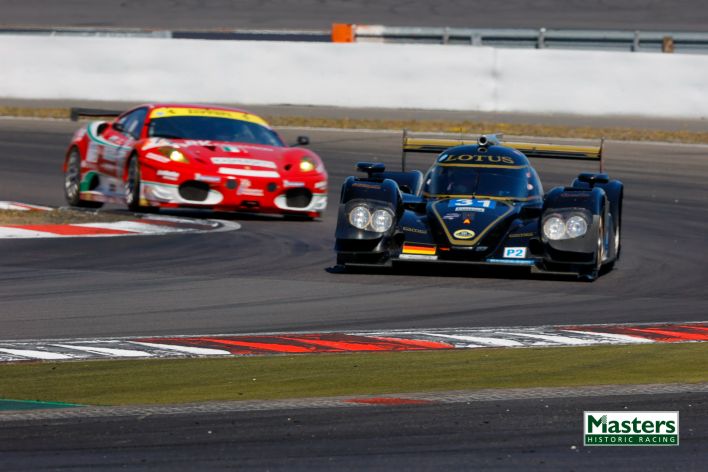 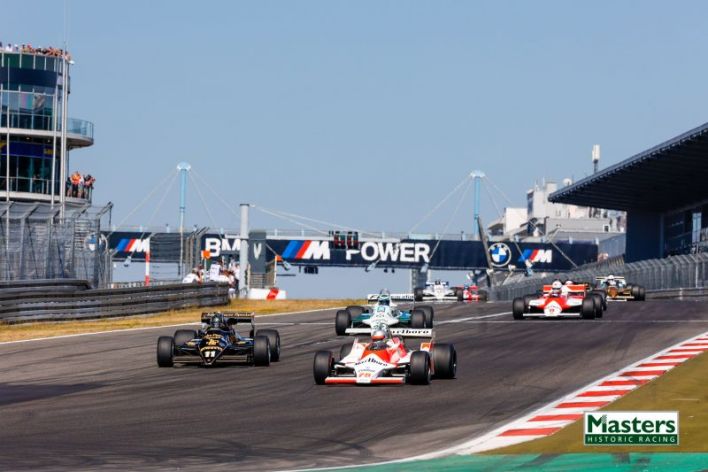 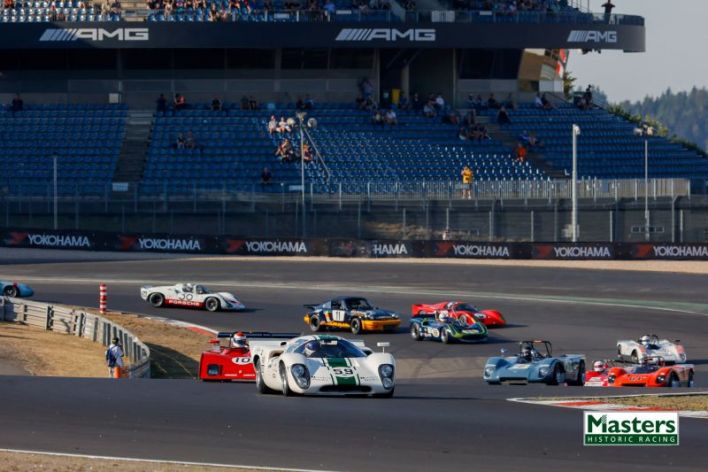 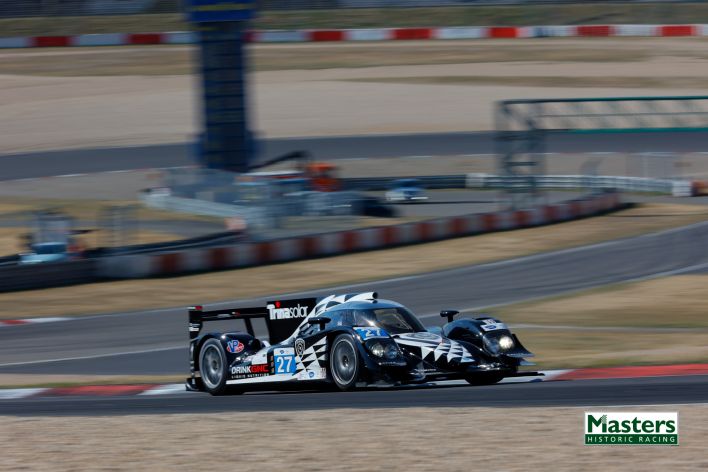 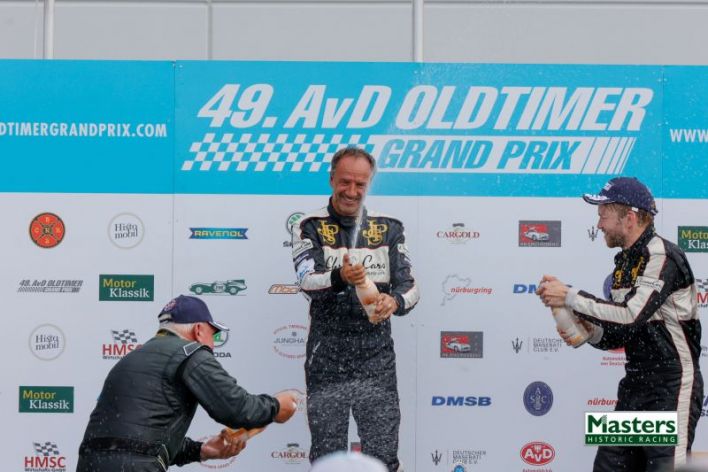 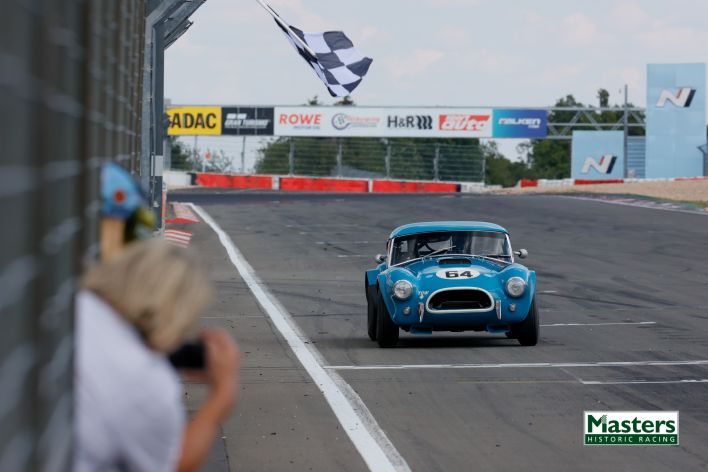 Marco Werner overcame his elite-driver penalty to win the first Masters Endurance Legends race at the Nürburgring, as the home hero’s Lola-Lotus B12/80 chased and caught Stuart Wiltshire’s Ligier JSP2 on the penultimate lap. Mike Newton kept the two leading cars in sight in the first part of the race, but in the end his older MG-Lola EX257 finished a distant third, ahead of Yannik Trautwein, the German debuting his ex-Dempsey Racing Lola B12/80.

“It was a little bit tough!” said Werner. “But it was a great race, and I think we put on a good show with the first three cars.”

Wiltshire had led away from pole but when he made a mistake into the first corner, Werner took over halfway into their opening stints. Forced to wait longer during the mandatory pitstop phase, Werner had to undo a 14-second deficit, which he duly did with two more laps remaining, before passing Wiltshire by outbraking his rival into the first corner. Meanwhile, in fifth overall, Andy Willis and Stephan Joebstl eased their way to a P3 class win in their Ligier JSP3.

“It was an endurance, that’s what it was!” said Wiltshire. “It was very hard inside the cockpit. I don’t think I could have held off Marco if I hadn’t made that mistake. I’m a 57-year-old amateur, and I’m fat! Marco is a three-time Le Mans winner and a legend – so, no… But you know, this is my first season and I’m enjoying the challenge.”

“I stayed with them in the opening laps”, said Newton, “but once we got into traffic I decided on settling for third. I tried to go for Marco, but he’s just too quick, and then had a look at Stuart when he made his mistake, but the Ligier is so fast and Stuart is good as well.”

In his Porsche 997 GT3, Andy Feigenwinter spun and won, as the Swiss driver debuting in the series threw away an early GT lead to come back and pass Jason Wright’s Ferrari 458 GT3 for the class victory. Christopher Compton Goddard (Ferrari 430) drove a well-managed race to claim third in class.

“Yes, I made a mistake early on”, said Feigenwinter. “A Ligier P3 made me nervous, he was pushing and then I spun. But I came back to pass the Ferrari and take the win. It was great – my first time here in Masters, and qualifying was perfect too, so I’m very happy!”

“It was really difficult out there”, said Wright. “But you know, I love the car, and I enjoy the Nürburgring, so it was great. It was a bit of a lonely race for me – the only interesting thing was Nick Padmore unlapping himself, which allowed me to watch his lines in total awe…”

“It was hot, but really good”, said Compton Goddard. “It was close racing initially, but after that I just tried to keep a safe distance to the Lotus in fourth. It was the first time I’ve driven this circuit, and I knew I was never going to catch the two in front, so I kept something in the tank. There was no need to overdrive.”

In what was likely the hottest Oldtimer Grand Prix edition ever, the Masters Endurance Legends grid lined up to hopefully still enjoy the last of the cool morning breeze before temperatures would go on to top the thirties. With no cars in the P1 class this time, P2 machines would be fighting for the overall win, as Stuart Wiltshire stormed away from pole to lead Werner, Newton, Trautwein and GT class leader Feigenwinter into the first corner.

Maintaining the same order for the remainder of the opening lap, Wiltshire’s Ligier JSP2 led Werner’s Lola B12/80 by 1.2 seconds, with Newton’s MG-Lola EX257 1.1 seconds further back. Trautwein, however, was gone, his first race in the ex-Dempsey B12/80 looking like it was going to be shortlived, but the German resumed at the back.

At the front, Newton was doing well to keep pace with the two more recent P2 cars in the first two places, while Feigenwinter in fourth was now 13 seconds adrift from the leader. The Swiss Porsche driver was chased by the P3 Ligiers of Andy Willis and Ron Maydon, with Gianluca Candiani’s open-top P2 Lucchini SR2 in seventh.

Next, Feigenwinter was in trouble too, the Porsche 997 GT3 dropping away before resuming in 11th overall. This handed the GT class lead to Jason Wright, whose Ferrari 458 GT3 was now up to seventh, as Willis, Maydon and Candiani were each elevated a spot.

On lap 4, an error into the first corner by Wiltshire helped Werner to take the lead, the Ligier almost losing second place to Newton too. Meanwhile, further back, Trautwein’s Lola that used to be campaigned by Patrick Dempsey, Nick Foster and Dane Cameron, was back up in seventh, having quickly dealt with Wright, Christopher Compton Goddard’s Ferrari 430 GTC, Wolfgang Henseler’s Lotus Evora GTE and Stephan Jocher’s Red Bull-liveried Porsche 996 GT3 RSR. Bringing up the rear was Christopher Stahl’s 430 GTC.

Fifteen minutes into the race, Werner had opened up a useful three-second gap to Wiltshire, with Newton a similar amount of ticks behind the Ligier. Willis was a lonely fourth, trailing by 33 seconds, while Trautwein had got up to fifth at the cost of Maydon. Further back, Feigenwinter was back into the GT class lead, having passed Wright for eighth overall.

As the pit window opened, Werner was the first to come in, followed by Trautwein, Feigenwinter and Henseler. Next up were Newton and Wiltshire, along with Candiani, Compton Goddard, Jocher and Stahl, the latter handing over to Nick Padmore. On lap 11, Maydon and Willis were the last two to come in, Willis changing places with Stephan Joebstl.

With Werner taking his elite-driver penalty at the stops, Wiltshire found himself back with a 14-second lead, with Newton just two seconds down on the German. Trautwein was now up to fourth, having jumped the Willis/Joebstl Ligier at the stops, while Maydon was in the wars, having spun at the hairpin at the back of the circuit. In sixth, Feigenwinter had returned to being a comfortable GT class leader, with his GT rival Wright sandwiching Candiani’s Lucchini in seventh. Compton Goddard was third in the GT class, ahead of Henseler, Jocher and Padmore, while Maydon resumed in 11th overall.

With ten minutes remaining, Wiltshire’s lead was diminishing at a rate of two seconds a lap, so Werner was now within six seconds of the lead. The German had left Newton behind by 16 seconds, who looked safe against the threat of Trautwein, who was setting similar lap times 38 seconds further adrift.

As the minutes ticked away, the fight up front hotted up ever more, Werner just 1.2 seconds away with less than three minutes to go. Going into lap 19, the German pulled off the move going into the first corner, to go on to claim a hard-fought win. Newton was a distant third, with Trautwein ending up fourth on his Masters Endurance Legends debut. In fifth, Stephan Joebstl cornered the P3 class win for himself and Andy Willis, while Feigenwinter bounced back from his early mishap to take sixth and the GT class win. Behind Candiani’s Lucchini, Jason Wright took second in class from Compton Goddard in ninth overall. Maydon’s Ligier rounded out the top ten.