The hills were alive with the sound of Masters engines! 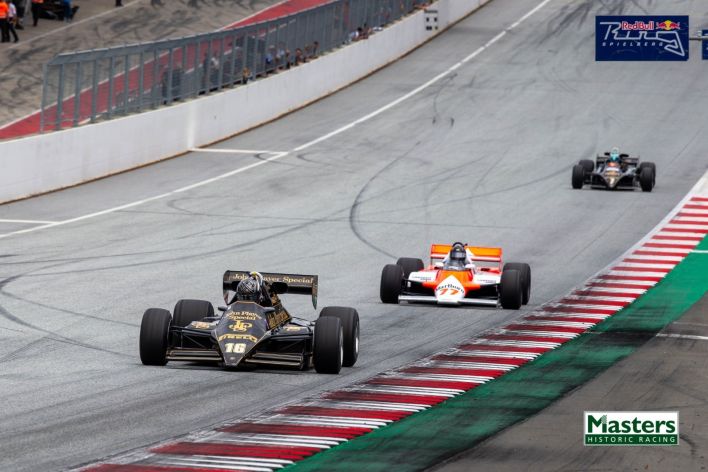 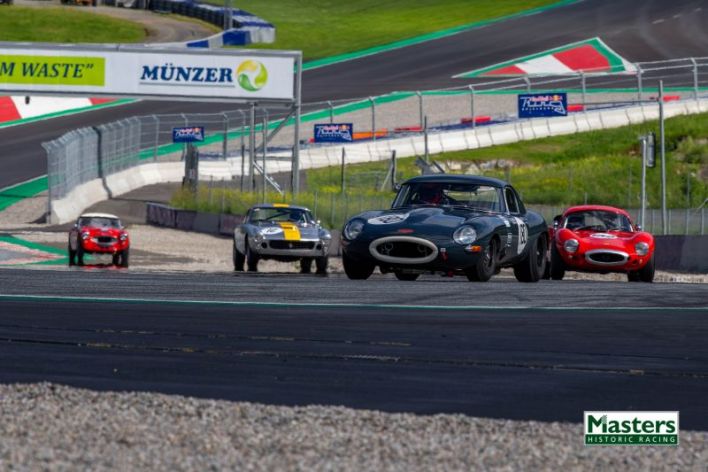 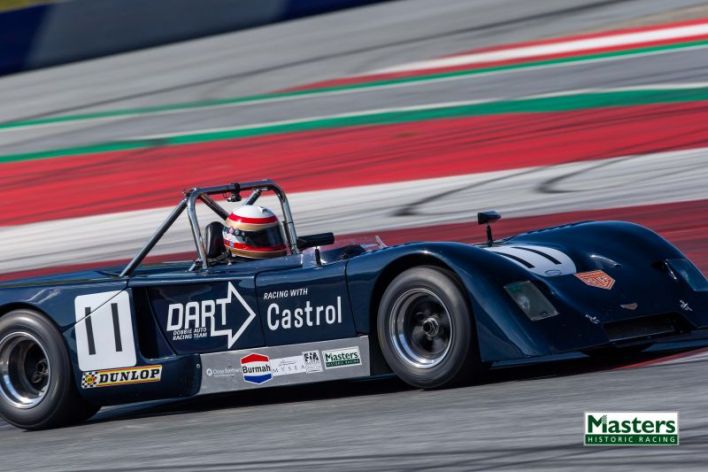 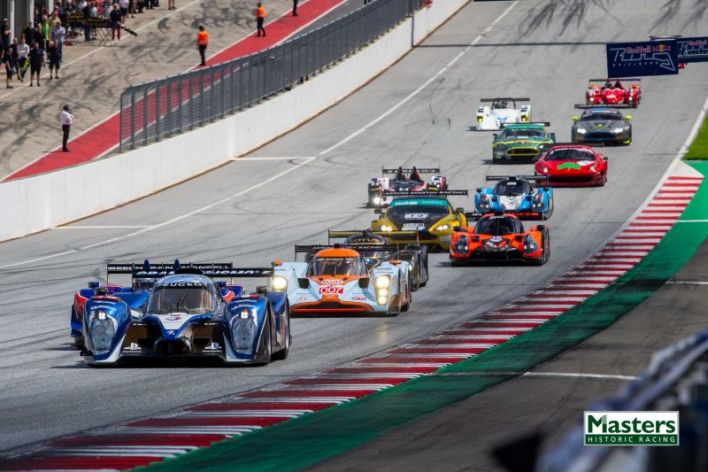 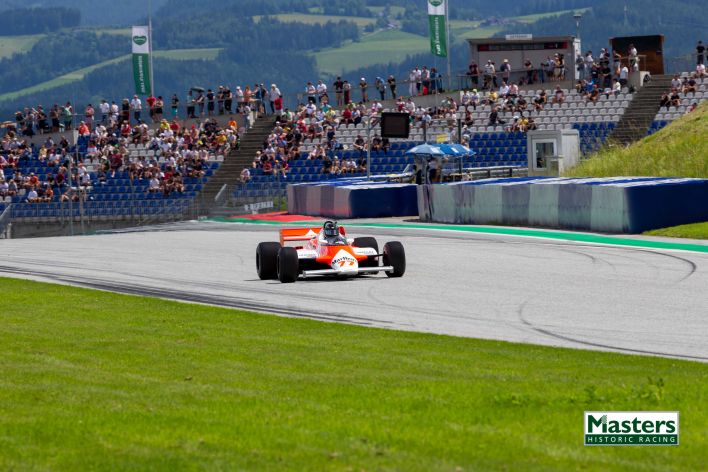 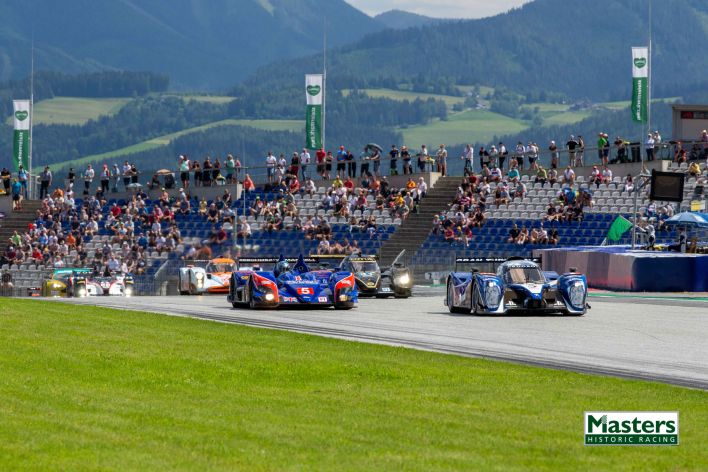 Michael Lyons prevailed in an epic race-long battle with Steve Hartley to win the first Masters Racing Legends race for 3-litre Formula One cars at the Austrian Historic. Hartley’s McLaren MP4/1 led away from pole but Lyons pounced on lap 6 – although after that, it was far from over, as Hartley continued to harry the post-82 class-winning Lotus 92 all the way to the chequered flag on lap 18.

Nick Padmore in the revolutionary double-chassis Lotus 88B long held a watching brief in third before retiring to the pits three laps from the end. This elevated Marco Werner onto the final podium spot, the German in his Lotus 87B slowly having lost touch with the leading trio.

Steve Brooks was a distant fourth in his Essex-liveried Lotus 81 after having been briefly led by Jonathan Holtzman in the Tyrrell P34. The American’s six-wheeler remained the last unlapped car to cross the line in fifth while taking pre-78 class honours. His task was made easier by Philippe Bonny retiring his Trojan T103 from ninth on lap 12. Holtzman headed home Georg Hallau’s Theodore N183 (second in the post-82 class), Marc Devis in his new Lotus 78 and local hero Arthur Brucker in the Arrows A6 run it's unique Golia livery as raced by Marc Surer in the 1983 Italian GP.

On a cloudy but warm day in the Austrian Alps, the field was sent on its way with Hartley leading from pole, followed by Lyons, Padmore and Werner, as Cosworth DFV engines in seventies and eighties Formula One echoed back from the surrounding Styrian hilltops for the first time since ages. At turn 3, Lyons had a look at Hartley for the lead but the series veteran resisted to complete the opening lap in first place. Further back, Holtzman’s Tyrrell P34 had nicked fifth from Steve Brooks in the Lotus 81.

Young Lyons wasn’t intent on letting the McLaren go, though, cutting Hartley’s lead to half a second on lap 2, with Padmore in the twin-chassis 88B on 1.8 seconds, and Werner on 4.1 ticks. Behind Brooks, the order remained the same: Hallau in the Theodore N183 in seventh from Devis in his new Lotus 78, Philippe Bonny in the Trojan T103 and Arthur Bruckner in the Arrows A6.

It was stalemate among the first four on lap 3, but Brooks had repassed Holtzman for fifth, albeit now finding himself 17 seconds behind the leading group. With Hartley clocking fastest lap of the race on lap 4, one-tenth quicker than Lyons, the gap was now back up to seven-tenths

Next time around, though, Lyons cut back Hartley’s lead to just two tenths, as the tyres were now past their prime. The pair had dropped Padmore by two seconds and Werner by 3.2 seconds, with Brooks now having stretched the gap to the class-leading pre-78 car of Jonathan Holtzman to five seconds, himself trailing the leader by 21 seconds. Further back, Bruckner passed Bonny for ninth.

Lyons indeed pounced going into lap 6, the overtake allowing Padmore to close up to 1.6 seconds. Despite the setback, Hartley wasn’t giving up, the McLaren continuing to snap at the Lotus 92’s gearbox while producing another fastest lap of the race, as the fuel loads began to lessen.

Halfway into the race, the nail-biting fight at the front continued unabated, still just a few tenths separating Hartley from Lyons in the lead. Such was their pace now that Padmore had lost touch and was 3.6 seconds down on the leader, while Werner had lost sight of the lead trio, now ten ticks in arrears. Brooks was a lonely fifth, ahead of Holtzman, Hallau and Devis, while Bonny had retaken Bruckner.

Now, on lap 10, Lyons made the fastest lap of the race his own for the first time since the start, opening up a slender lead of just over a second. Next time, it was 1.3 seconds, but on lap 12, it was back down to a second. With seven minutes remaining, this thing was far from over. It was for Philippe Bonny, though, the Frenchman retiring from ninth overall and second in the pre-78 class, as his Trojan T103 succumbed to a failed right-rear wheel bearing. Slightly further in front, Hallau was now pressuring Holtzman for sixth overall, both the German and American now lapped by the charging leaders.

On lap 15, Hartley had chiselled off seven-tenths to trail by three-tenths, as this gripping duel continued towards the chequered flag, but we had a new man in third place: Nick Padmore had retired his Lotus 88B to the pits, handing the place to Marco Werner, now 19 seconds down on the leading pair. In the pits, it was found that something was knocking on the 88B’s rear wheel.

At the front, it remained nip-and-tuck until they crossed the line for the final time, Lyons keeping it together for a narrow win after 18 hard-fought laps. Werner took third, 21 seconds down, with Brooks next up, a minute behind the winner. Remaining unlapped, Holtzman won the pre-78 class by taking fifth overall ahead of Hallau (second in the post-82 class behind Lyons), Devis and Bruckner.