The Masters Gentlemen Drivers enjoyed a one-day outing on the Silverstone GP Circuit as part of the HSCC International Trophy event.  Northamptonshire welcomed the day with bright blue sunshine for the entire day as the pre-66 GT cars treated us to some great battles! 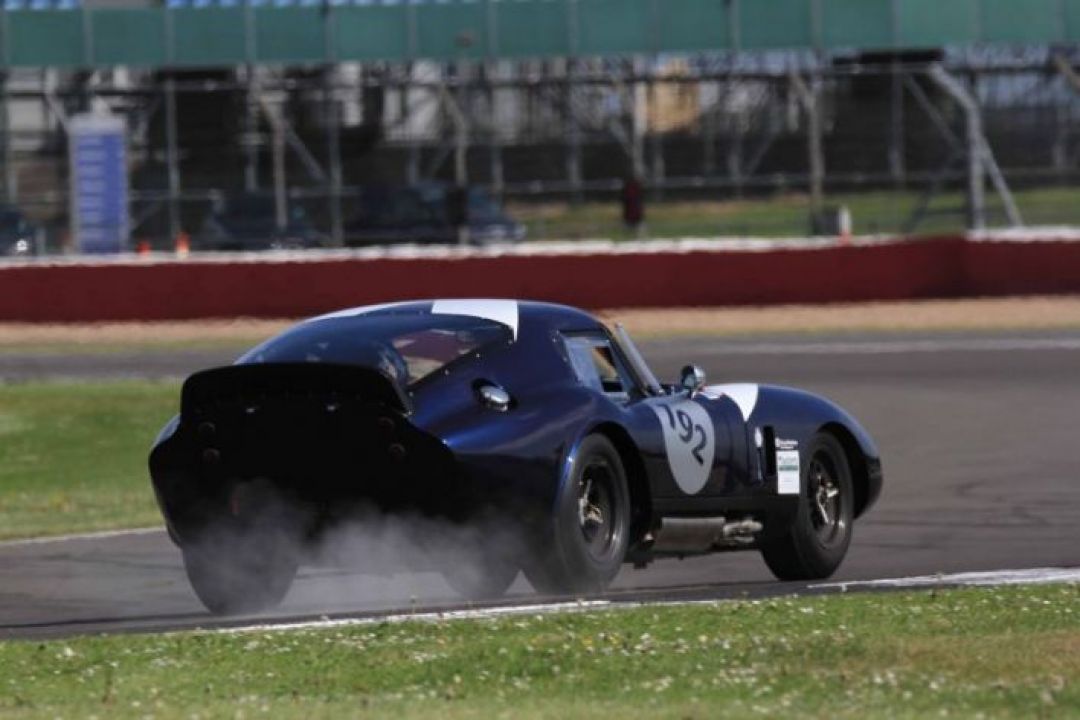 Julian Thomas and Calum Lockie continued where they left off at Donington Park one month ago by doubling up with victory in the second Masters Gentlemen Drivers race of the season. In the stand-alone one-hour race in the HSCC’s International Trophy event at Silverstone, their Shelby Cobra Daytona Coupé led from pole in the hands of Thomas, while Lockie clawed back a deficit created by their longer ‘elite-driver’ pitstop and their closest rival Mike Whitaker stopping short.

Whitaker’s TVR Griffith took second on the road but was handed a 30-second time penalty for only serving his pitstop-induced penalty once the safety car had come out seven minutes from the end as a result of Philip Kadoorie’s AC Cobra having its engine expire. Whitaker dropping down to fifth in the final classification meant that father and son Graeme & James Dodd were promoted to second in their Jaguar E-type, with John Davison’s Griffith taking third.

In fourth overall, Robin Ward romped to a dominant CLP class victory driving Ron Maydon’s Ginetta G4R, with John Tordoff and Richard Baxter taking second and third in class in a pair of Lotus Elans as they ran home 11th and 12th overall.

On a sunny spring day in Northamptonshire, the field was sent on its way bang on time for the 60-minute race, with Donington Park first-round star driver Thomas leading the way from Whitaker and Davison before Whitaker stole first place before the end of the first lap. Graeme Dodd in the E-type and Michael Cullen in the second Daytona Cobra were up next, followed by Philip Kadoorie’s Cobra, the fast-starting Nick Sleep in another Cobra, CLP class leader Ward in the Ginetta, Roy Alderslade in the third Cobra Daytona Coupé and Chris Lillingston-Price in another E-type.

Second in the CLP class came John Tordoff chased the similar Elan of Robin Ellis who had been put in the invitational class after having brought the wrong tyres. Richard Baxter’s Elan was third in class on a first outing with Masters, with Carl & Billy Nairn further back in another Elan.

On lap 2, Thomas restored order by reclaiming the top spot but Whitaker was still chasing him hard, the two having dropped a two-second gap to Davison, with Dodd a further four ticks back. Behind them, Kadoorie had moved up into fifth, demoting Cullen.

In C2, Crispin Harris was the early pace-setter among the Austin Healey 3000s contesting the class, occupying 16th place overall, while in 20th, 21st and 22nd, Mark Pangborn, Nils-Fredrik Nyblaeus and David Smithies all warred over second place in class, Smithies usurping the Swede for third in class on lap 5. Just behind Smithies, James Thorpe led C1 in the Porsche 911 shared with Phil Quaife, 14 seconds ahead of Andrew Walton’s similar 911. In B1, the Lotus Elite battle between Marc Gordon and Robert Ingram went in Gordon’s favour for the moment.

15 minutes gone, and six laps into the race on the proper Grand Prix circuit, the field had settled down into a rhythm, with Thomas now leading Whitaker by 1.6 seconds, while Davison had dropped a handful of additional ticks to be third, 9 seconds down on the leader. Kadoorie remained the man on the move, the Cobra now also having displaced Dodd to take fourth while trailing Thomas by 18 seconds. Further back, Alderslade had pinched eighth overall from Ward who continued to comfortably lead the CLP class. The order in all the lower classes remained unchanged.

Eight laps down, Thomas had inched further away from Whitaker, his lead now up to two seconds, the two in a different class from the rest of the field, as Kadoorie began reeling in Davison in third, the gap now down from seven to five seconds. Further back, the Charles Allison/Peter Thompson AC Cobra dropped from 11th to 26th as a result of Allison pulling off but managing to rejoin a couple of minutes later. In C2, Harris was losing places overall but remained in the class lead – Pangborn had come within striking distance, though, only to lose vital ground when he ran wide.

Two more laps, and the pit window of this one-hour race would open, and on lap 10, Michael Cullen was the first one in to be relieved by Paddy Shovlin, followed by Nick Matthews in the Elan and Rick Willmott in the E-type. Graeme Dodd was the first from the top-five to pit, handing over to son James. Shovlin wasn’t exiting the pits, however, and the Cobra Daytona continued to drop down the order before the car was eventually retired.

On lap 12, having built a 5.7-second lead, Thomas came in to hand over to Calum Lockie, and he was joined by Whitaker, Kadoorie and Ward, with only Davison, Sleep and Jamie Boot in the third Griffith staying out for another lap. In the CLP and C2 classes, Elans and Austin Healeys came dropping in one after the other for their mandatory stop.

However, as the pitstops panned out by lap 14, Whitaker suddenly found himself in a comfortable 12-second lead as Lockie had looked like having lost a monumental 25 seconds on his rival instead of the 10 additional seconds at the stops for his ‘elite driver’ status. But there was a simple reason for that – Whitaker had stopped short of the required time, and soon enough he was slammed with a stop-and-go penalty, the same fate befalling Roy Alderslade. Meanwhile, James Dodd had hauled the E-type back up into third, 31 seconds down on Whitaker but leading Kadoorie by 14 seconds, who himself had Ward chasing him in the CLP-class-leading Ginetta. In class, Ward still led Tordoff (in 11th overall) and Matthews (in 13th overall).

In C2, James Wilmoth in the Austin Healey 3000 started by Harris maintained a narrow lead of Harvey Woods in the Big Healey previously raced by Mark Pangborn, but behind them Jeremy Welch – having taken over from Nyblaeus – was quickly working his magic, having already passed Alasdair Coates in David Smithies’ Austin Healey and aiming to move into the class lead within the next two laps – and indeed he did on lap 17.

Meanwhile at the front, a Calum Lockie unleashed did not even need Mike Whitaker coming in for his pitstop penalty, as on lap 18 he surged past the TVR to reclaim the lead. Also, Alderslade was still circulating in eighth overall and was yet to serve his penalty. Dodd, in third, trailed the leader by 37 seconds, with Davison still in fourth, a further 14 seconds in arrears and slowly dropping Kadoorie. Ward was a comfortable sixth and a consummate CLP class leader, with Lillingston-Price, Alderslade, Joel Wykeham (in Nick Sleep’s Cobra) and Ellis completing the top-ten with less than ten minutes remaining on the clock. Further back, Nick Matthews retired his Elan from third in the CLP class, in the process elevating Richard Baxter’s similar car into the position.

Then, after a relatively calm 53 minutes, the engine in Philip Kadoorie’s Cobra cried no more as it relieved itself from its oily contents to bring out the safety car just when Whitaker had come in to serve his penalty, helping him to maintain in second place. The safety car allowed the field to bunch up, but the clock was running out, and the result was that the race finished under yellow. Thomas and Lockie took their second win on the trot, with Whitaker and the Dodds completing the overall podium. Davison took fourth ahead of runaway CLP class winner Ward, as Lillingston-Price, Alderslade, Sleep/Wykeham, Ellis and Boot rounded out the top ten. However, when it turned out that Whitaker had in fact come in after the safety car was deployed, he was handed a 30-second penalty that dropped him down to fifth, allowing Davison to join Thomas, Lockie and the Dodds on the podium.

In 11th and 12th, Tordoff and Baxter took second and third in the CLP class, while in 14th overall, the Nyblaeus/Welch combo duly grabbed C2 honours from Harris/Willmoth, Pangborn/Woods and Smithies/Coates, all in Austin Healeys. James Thorpe and Phil Quaife beat Andrew Walton in the intra-911 battle for the C1 class win while Marc Gordon led home Robert Ingram’s similar Lotus Elite in B1.