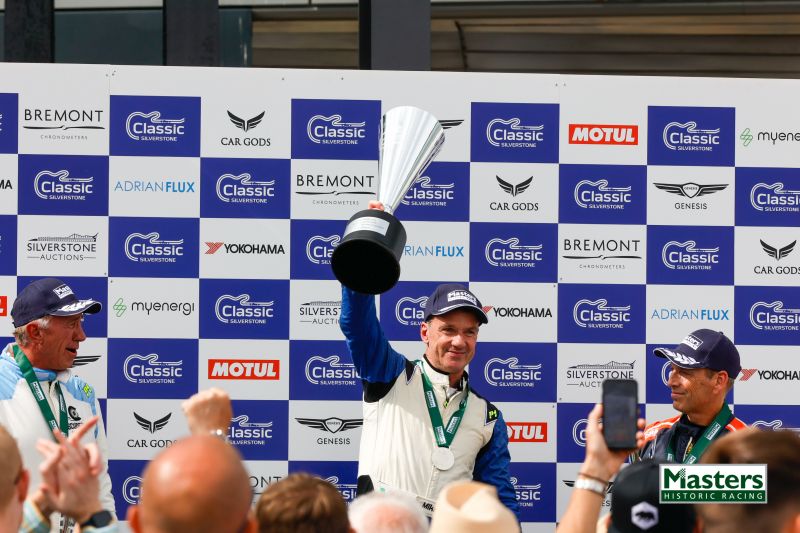 Mike Cantillon made it two from two by also claiming victory in the second Masters Racing Legends race at the Classic, as his Williams FW07C aptly produced two wins in honour of Sir Frank Williams who was remembered in both Frank Williams Memorial Trophy races. From the reversed grid for Saturday’s top six, the Irishman needed four laps to power to the front, after which he managed a useful lead over Jamie Constable’s Tyrrell 011. Cantillon was presented the winner’s trophy by Jonathan and Jamie, the sons of Frank Williams.

“That was fun!” said a delighted Cantillon. “It must have been great for the spectators too – lots of things happening! I can’t believe I’ve won both races, actually, and I’m super pleased to have received the trophy from the Williams boys…”

“I’m really happy”, said Constable. “We have totally rebuilt the car, and yesterday were the first miles I’ve done in it! I felt really competitive today, and it was good to race Mike. I’ve raced him for 20 years, you know – we both started in Caterhams, and here we are!”

In third, Ken Tyrrell made it two Denim-liveried Tyrrell 011s on the podium as the American saw a late challenge from Steve Brooks in the Lotus 91 end prematurely when the latter spun on the final lap. Brooks still salvaged fourth, helped by the fact that his rivals Steve Hartley (McLaren MP4/1) and Christophe d’Ansembourg (Williams FW07C) also produced spins that each cost them some ten seconds. Polesitter Mark Hazell (Williams FW07B) defended bravely early on, but dropped back to seventh in the end, ahead of post-82 class winner Ian Simmonds in the Benetton-sponsored Tyrrell 012.

“This was a more exciting day than yesterday”, said Tyrrell. “Yesterday, all the action happened in front of me and behind me, but today I was in the middle of it! I was pushing hard for second place, but I’m very happy with two thirds at Silverstone – can’t complain about that.”

Phil Hall looked odds-on favourite for the pre-78 win but when his Theodore TR1 faltered halfway into the race, Ewen Sergison was there to pick up the pieces and claim the class win in his ex-Regazzoni Shadow DN9A.

As on Saturday, the Masters Racing Legends kicked off the day’s Masters proceedings, with nineteen 1966-’85 Formula One cars lining up for their second Frank Williams Memorial Trophy race of the Classic weekend. From the reversed grid for Saturday’s top six, Mark Hazell – aptly in a Williams FW07B – led away from Jamie Constable in the Tyrrell 011, Steve Brooks in the Lotus 91, Ken Tyrrell in the other Denim-liveried 011 and arguably the two pre-race favourites, Steve Hartley (McLaren MP4/1) and Mike Cantillon (Williams FW07C), with Christophe d’Ansembourg’s similar FW07C up next from Saturday’s pre-78 class winner Phil Hall in the Theodore TR1 that in the hands of Keke Rosberg proved to be a giant-slayer in the 1978 International Trophy right here at this very track.

Constable immediately put pressure on the leader, as Cantillon made up a spot on Hartley to re-create their order from the previous day. Hazell held on for the opening lap, but Cantillon made up another place out of Club corner, demoting Tyrrell to fifth. At the end of the Wellington straight, however, Constable outbraked Hazell, after which Brooks and Cantillon sneaked through as well out of Brooklands. At the back, Charlie Kennedy was forced to retire his high-airbox Surtees TS16.

Into lap 3, Cantillon made it past Brooks, while further back d’Ansembourg nicked sixth from Hartley. Before the end of the lap, Cantillon was back where he ended the day before – in the lead – as Hazell was passed by both d’Ansembourg and Hartley to drop down to seventh. In eighth, Hall easily led the pre-78 class as his nearest rival Ewen Sergison (Shadow DN9A) was down in 16th.

At the front, Cantillon put 1.6 seconds in between himself and Constable as the fifth lap got underway. Four seconds further back, Tyrrell moved into third at the cost of Brooks while Hartley still harried d’Ansembourg for fifth. Having lost some pace, Hazell was left behind by six seconds, but still had eight seconds in hand over Hall, who was chased by Ian Simmonds in the post-82 class-leading Tyrrell 012, with Mark Harrison’s Shadow DN9 and Neil Glover’s Arrows A5 further back.

Halfway into the race, Cantillon began to settle into his lead, slowly expanding it to 2.8 seconds, while Tyrrell put a similar margin between himself and Brooks in fourth. D’Ansembourg and Hartley were still at it hammer and tongs, Hartley passing the Williams into the complex, after which the Belgian spun and did a 360 out of Luffield. On the next lap, though, Hartley spun round on the same spot! The McLaren still managed to hold on fifth. Someone not holding on to his spot was Phil Hall, however, the pre-78 class leader grinding to a halt at Abbey, in the process handing the class lead to Sergison.

With five minutes remaining, Cantillon maintained his 2.8-second cushion to Constable, who now faced a fast-approaching Ken Tyrrell, with Brooks keeping those two very much in sight as well. Due to their spins, Hartley and d’Ansembourg faced 10-second gaps to their rivals in front, with Hazell now closing on the Belgian. Simmonds was eighth, with Glover and Mark Higson in the McLaren MP4/1B having passed Harrison for ninth and tenth. Pre-78 class leader Sergison was now 12th overall, leading Paul Tattersall’s Ensign N179. From the back, Michael Fitzgerald’s Minardi M185 and Mark Dwyer’s Osella FA1D were forced to retire from the race within a short frame of time, the Osella stuck in gear.

As the clock wound down, Cantillon drove home his second win of a successful Classic weekend. Constable had been left behind by 3.9 seconds, while Tyrrell had to give up his chase of the other 011 and saw Brooks closing rapidly but his podium finish was saved when the Lotus spun round at Brooklands. Brooks hung on to fourth from Hartley, d’Ansembourg and Hazell, with Ian Simmonds taking the post-82 class win in eighth. Glover and Higson completed the top ten while Ewen Sergison bagged the pre-78 class victory in 12th overall. 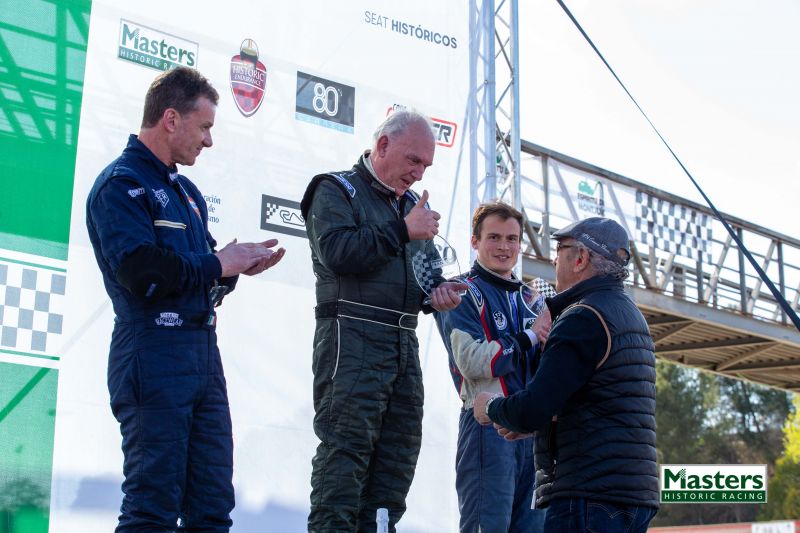