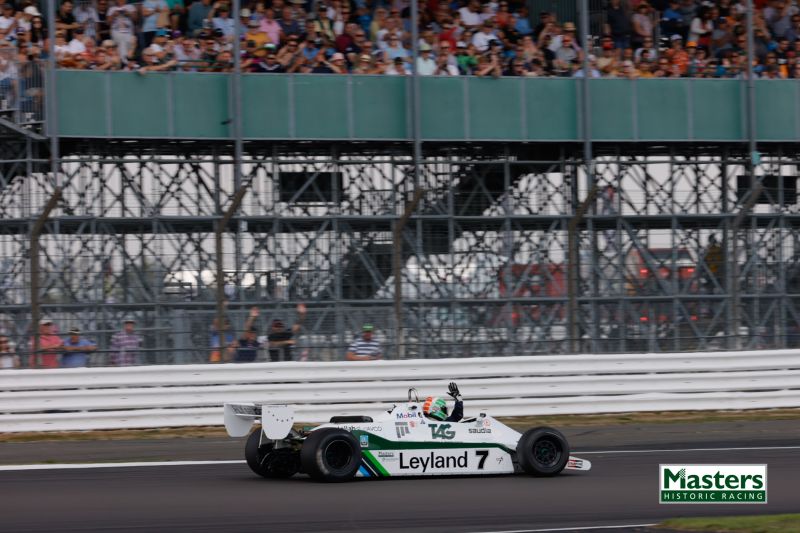 Mike Cantillon converted pole into a controlled 5.1-second Masters Racing Legends win over Steve Hartley in the first Masters race of the Classic weekend at Silverstone, his Williams FW07C becoming an apt winner of the first Frank Williams Memorial Trophy race for 1966-’85 Formula One cars. From third on the grid, Hartley’s McLaren MP4/1 swiftly dispatched of front-row sitter Ken Tyrrell on the opening lap, but after that failed to make an impression on the Irishman. Tyrrell ran home an excellent third, his Tyrrell 011 finishing 27 seconds down on the winner.

“I knew Steve was coming for me!” said a jubilant Cantillon. “He had my pace, so it’s going to be interesting race tomorrow.”

“I tried everything, different lines, different braking points, everything, but Mike had the legs of me”, said Hartley. “But tomorrow is another day!”

“I must probably be one of the happiest third-place finishers in the history of Silverstone”, said Tyrrell. “I’m really happy to be here…”

Steve Brooks came through for a fighting fourth, passing Mark Hazell’s Williams FW07B and Jamie Constable’s Tyrrell 011 after Constable initially took the fight to Hazell. From a lowly 13th on the grid, Christophe d’Ansembourg produced a barnstorming comeback race to come away with fifth, vaulting Constable and Hazell right at the end.

In his Theodore TR1, Phil Hall claimed an emphatic pre-78 class win to end up a strong eighth overall ahead of Mark Higson’s McLaren MP4/1B, Ian Simmonds in the post-82 class-winning Tyrrell 012, Neil Glover’s Arrows A5 and Chris Perkins taking second in the pre-78 class, his Surtees TS14 finishing in 13th overall.

Kicking off the Classic’s Masters races on what was a very sunny Saturday afternoon, the Masters Racing Legends went out on track just after 1pm, the Frank Williams Memorial Trophy field led around by the polesitting Williams FW07C of Mike Cantillon. The Irishman ran away, but Ken Tyrrell in the Tyrrell 011 was pressured immediately by Steve Hartley’s McLaren MP4/1 for second place, who passed his rival into Stowe. Hazell, Brooks and Constable were up next, followed by Higson, Harrison and pre-78 class leader Phil Hall in the Theodore TR1. At the back, Arthur Bruckner jumped the start in his Arrows A6, but he soon dropped behind the other cars again.

A storming two opening laps took Cantillon to a lead of 3.7 seconds over Hartley, while further down the road Jamie Constable’s Tyrrell 011 took Steve Brooks’ Lotus 91 at the end of the Hangar Straight. Christophe d’Ansembourg, meanwhile, was recovering from his lowly 13th starting spot, the Belgian now up to eighth in his Williams FW07C. In ninth, overall, Hall still led the pre-78 cars, well ahead of Ewen Sergison’s Shadow DN9A in 12th overall.

On lap 3, Mark Higson’s McLaren MP4/1B was d’Ansembourg’s next victim, as the Belgian was now up into seventh, but trailing Steve Brooks by six seconds. Outside the top ten, Chris Perkins in the Surtees TS14 passed Mark Dwyer’s Osella FA1D for 13th overall, but remained third in the pre-78 class.

Four laps gone, and Hartley began to nibble away at Cantillon’s lead, ‘The Jam Baron’ bringing his rival’s lead down to 2.9 seconds, as Tyrrell dropped away to a 7-second disadvantage to Hartley. The American in turn had six seconds in hand on Hazell who was chased hard by Constable and Brooks. D’Ansembourg trailed that trio by 12 seconds, having made a mistake, while Phil Hall hauled his pre-78-class-leading Theodore TR1 up into eighth overall, at the cost of Higson’s McLaren MP4/1B. Ten seconds further back, Neil Glover in the Arrows A5 was tenth ahead of Chris Perkins’ Surtees TS14 and Mark Harrison’s Shadow DN9.

With eight minutes remaining on the clock, Constable moved up another place, this time demoting Hazell, but Cantillon maintained a 2.9-second lead on lap 6. In 12th overall, Ian Simmonds was on a charge, his Tyrrell 012 having passed Harrison’s Shadow. In front of those two, Chris Perkins was 11th and in second place in the pre-78 class, Ewen Sergison having dropped to 14th overall, as his DN9A was beginning to lose pace.

On lap 7, Hazell lost another place, as Brooks moved up into fifth to immediately challenge Constable – the Spitfire pilot tried at Copse but went wide and was forced to tuck in behind. He wasn’t done, though, as into Abbey, Brooks dove inside the Tyrrell to go from sixth to fourth in the space of one lap.

At the front, the leaders were starting to lap Bruckner’s Arrows, Alejandro Chahwan in the March 811 and Michael Fitzgerald’s Minardi M185, as Sergison pulled off to retire his ailing Shadow. Cantillon seemed more apt in passing the backmarkers, and the Irishman pulled out a 5.1-second lead over Hartley in the process, now making fully sure of victory. After 11 dominant laps, Cantillon crossed the line in first, from Hartley in second place, while Tyrrell took third, 27 seconds down on the winner.

Brooks took fourth, having almost caught Tyrrell, as d’Ansembourg snatched fifth from Constable on the final lap. After a pair of errors, Hazell came home in a distant seventh, ahead of emphatic pre-78 class winner Phil Hall. Higson was ninth ahead of Simmonds, Harrison and Glover, while in 13th overall, Perkins took second in the pre-78 class. 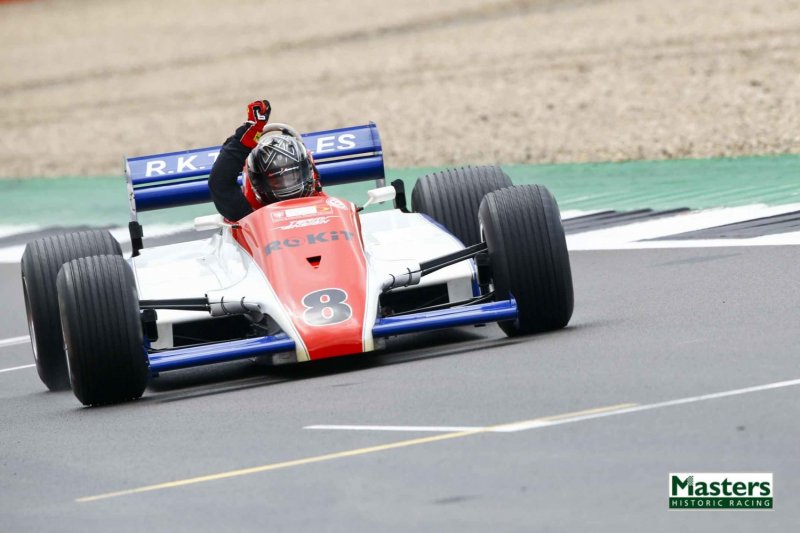