Christophe d’Ansembourg soaked up race-long pressure from Steve Hartley to triumph in front of his home crowd, as the Belgian Williams FW07C driver beat the Briton’s McLaren MP4/1 by less than three tenths. Meanwhile, Marco Werner ran home a distant third in his Lotus 87B, 17 seconds down on the warring pair at the front.

“It was pressure all the time, but I never let go!” said a jubilant d’Ansembourg. “I gained on him on the Kemmel Straight but was losing out in the second part of the lap, so I worked hard to get as much distance between us in the first sector.”

“He was Mister Cool”, said a magnanimous Hartley. “I was just waiting for the backmarkers in the hope he would make a mistake – but he didn’t.”

“Not really happy, no”, said Werner. “I had trouble with second gear that kept jumping out, especially at Les Combes. So I was fighting with my car more than with the others!”

Nick Padmore initially did the chasing, rocketing up to third from fifth on the grid but his Lotus 77 soon faltered to give way to Michael Lyons in the post-82 Lotus 92 and pre-78 class rival James Davison in Brad Hoyt’s Hill GH1, Lyons and Davison both snatching class wins. Steve Brooks (Lotus 91) grabbed sixth from Mark Higson’s McLaren MP4/1B and pre-78 class runner-up Patrick d’Aubréby (March 761).

“We maximised what we could in a different class of car”, said Davison. “So we had a competitive race and a good result for the mechanics and car owner Brad Hoyt. I was in the car at Monaco earlier this year but we didn’t get any competitive laps there, so it was good to be able to race it here.”

Other casualties were Ken Tyrrell who had qualified a strong third but soon disappeared when his Tyrrell 011 hit electrical issues, and Warren Briggs who ran a competitive sixth before his McLaren M29 began to overheat. This elevated Marc Devis (Lotus 78) and Paul Tattersall (Ensign N179) into the top ten while in 11th overall Arthur Bruckner’s Arrows A6 claimed second in the post-82 class.

Given the severity of the initial weather forecast at the start of the day, conditions were more favourable than expected, with even the sun making a surprise appearance, but the first Masters Racing Legends bout of the weekend was still declared a wet race. Meanwhile, Mark Higson was under investigation for a breach of the starting procedure, while Nick Padmore’s Lotus 77 sounded really rough on its way to the grid, but it still took off like a gun, stealing fourth from Marco Werner in the first dash to Eau Rouge.

With local hero Christophe d’Ansembourg on pole, the home crowd were looking for a popular winner, and the Belgian indeed led around the first lap, initially chased by Steve Hartley’s McLaren MP4/1 and Ken Tyrrell’s Tyrrell 011, but Padmore was flying and soon grabbed third from Tyrrell while being followed through by Werner. Before the lap was over, Michael Lyons in the Lotus 92 also passed Tyrrell to be fifth, with James Davison in Brad Hoyt’s Hill GH1 sixth and second in the pre-78 class.

On lap 2, Hartley continued to pile the pressure on d’Ansembourg, with Padmore hot on his heels, the three having opened up a gap to Werner, Lyons, Davison and Warren Briggs in the McLaren M29, the Kiwi also having passed Tyrrell, who was soon dropping further down the order in a Tyrrell 011 that was obviously not quite alright – and in fact, the American was into the pits at the end of the lap to retire with an electrical issue.

His tyres now properly heated, Werner suddenly turned into the man on the rise, as the German closed on Padmore to pass him halfway into the third lap. Soon after, Lyons in the post-82 class-leading Lotus was up into fourth, leaving Padmore to directly fight with pre-78 class rival Davison – that is, as long as it lasted, as the Briton entered the pits with the Lotus 77, the rough sound of its engine having been an advance warning after all. Three laps later, the ignition box was replaced and Padmore was sent on his way again.

After four laps, d’Ansembourg still held his own against Hartley, who was still following the Williams FW07C in its tracks. Werner was five seconds down, with Lyons a further five ticks adrift. Davison was the consummate pre-78 class leader now, well away from Patrick d’Aubréry’s March 761 in ninth overall, as they sandwiched Briggs, Steve Brooks in the Lotus 91 and Higson’s McLaren. Mark Hazell was tenth in his Williams FW07B, ahead of Marc Devis in the Lotus 78, Paul Tattersall’s Ensign N179 and Arthur Bruckner in the second post-82 car in the field, the uniquely Golia-liveried Arrows A6, with Michel Baudoin bringing up the rear in his March 821.

At the halfway point, d’Ansembourg pulled a fastest lap of the race out of his bag of tricks to increase his lead to Hartley to seven-tenths, as Werner and Lyons dropped away to a deficit of nine and 14 seconds respectively. In fifth, Davison trailed Lyons by a further four seconds.

Seven laps of the race gone, and still, there was almost in between the Belgian in front and his British nemesis in the carbonfibre McLaren. It was obvious, though, that only mechanical issues or human error could prevent them from finishing in the top two positions, as the chasing Lotus cars now languished 11 and 17 seconds down, with pre-78 class leader Davison in fact closing on Lyons. Meanwhile, Brooks and Higson had moved up a place thanks to Warren Briggs reporting to the pits, joined there on the same lap by Mark Hazell, meaning that d’Aubréby, Devis and Tattersall now rounded out the top ten. Briggs was out with an overheating engine, but Hazell went back out again. On the next lap, Padmore was back in, its engine still not where it should be.

Four minutes remained on the clock, and Hartley was going for his final push. Fastest lap of the race took him to two tenths off d’Ansembourg who was now under severe pressure. Would the Belgian succumb or hang on? Completing the next lap in exactly equal times proved how evenly matched these two were.

On the final lap, it was d’Ansembourg’s turn to steal a few tenths from his rival, and he then carried that through to the finish for a hard-fought win. Werner was a distant third, 17 seconds down, while respective post-82 and pre-78 class winners Lyons and Davison took fourth and fifth, Davison trailing the Lotus 92 across the line by 1.5 seconds. Brooks and Higson were next up, followed by d’Aubréby who took second in the pre-78 class. Behind Devis and Tattersall, Arthur Bruckner’s Arrows A6 was the post-82 class runner-up. 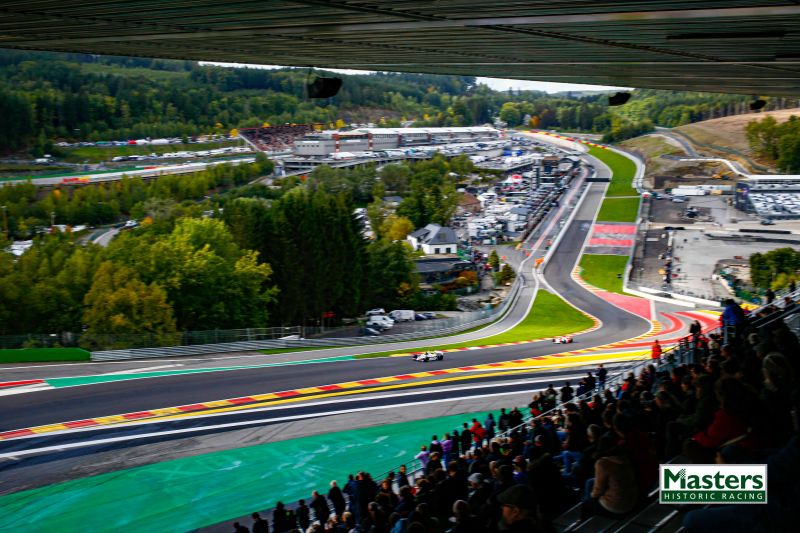 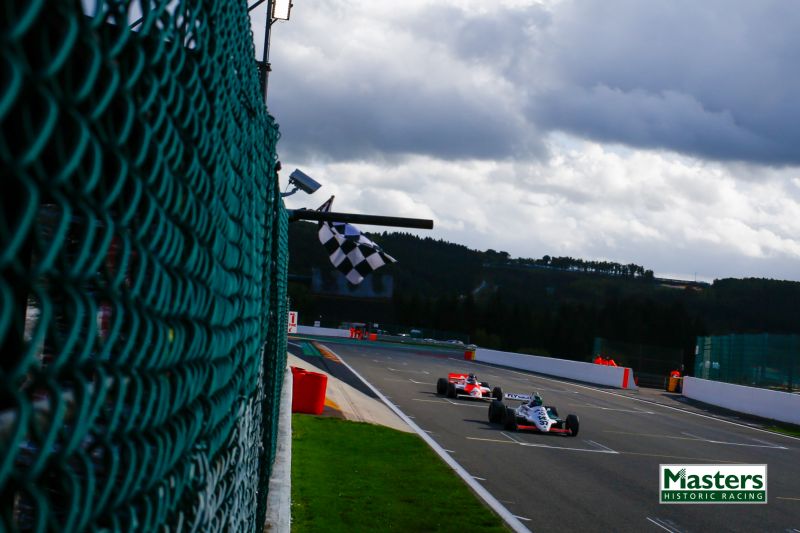 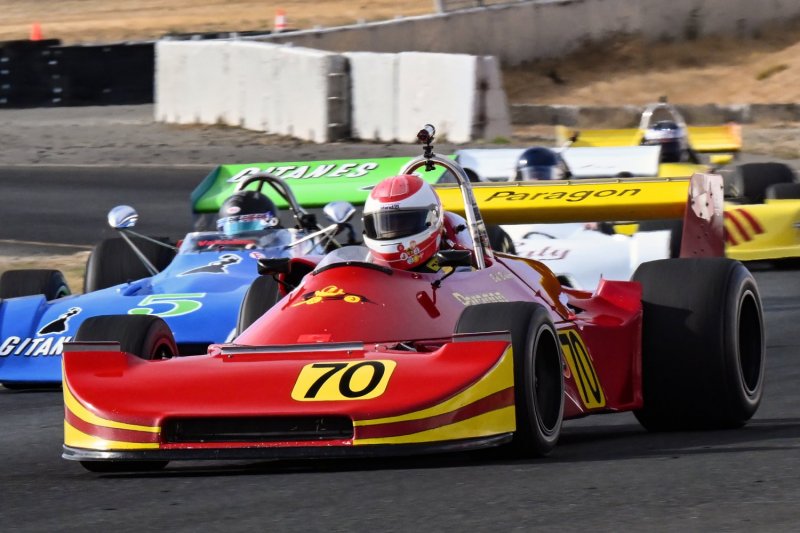