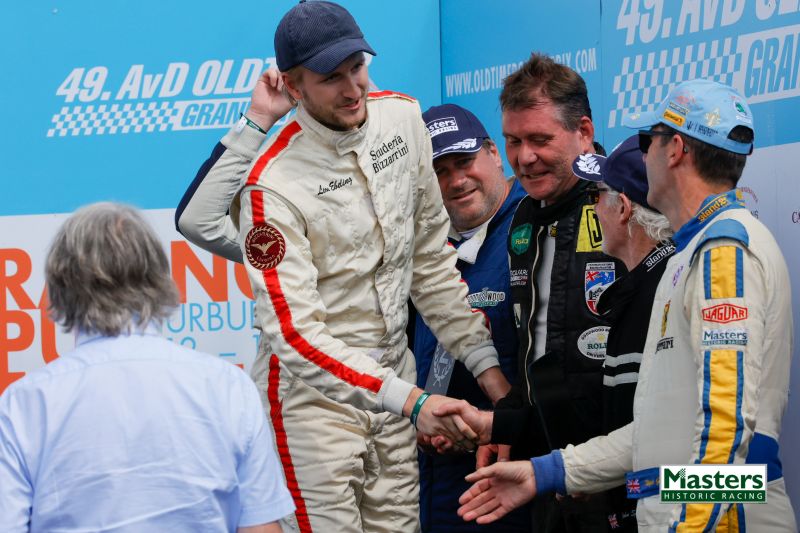 Leon Ebeling and Andy Newall ran home a convincing win in the Masters Gentlemen Drivers race at the Oldtimer Grand Prix, the German leading by a narrow margin during his opening stint before Newall contained a 30-second gap partly created by the elite-driver pitstop penalties for the cars behind them. Their Cobra was followed home by the similar car shared by Niko Ditting and Sam Hancock, with the pole-sitting TVR Griffith of John Spiers and Nigel Greensall coming in third.

“Leon did all the hard work”, said Newall, “I just brought it home. We had a really good pitstop, we were bang on zero when I left, and had a good outlap. I think we won about eight seconds there.”

“My race was very enjoyable”, said Ebeling. “I was holding a four-second lead initially, but eventually I could not hold Michael Lyons in the TVR Griffith. It’s great how the race came back to us at the stops, although those elite-driver penalties helped too!”

In the second Gotcha Cobra, Vincent Kolb ran a close second to Ebeling early on but relief driver Stippler was delayed by a stop-and-go penalty for stopping short during the mandatory pitstops. Until then, Stippler had been battling Hancock for second place. Towards the pitstops, Michael Lyons pushed through into a brief lead in Felix Haas’ Cobra, but Haas was unable to keep Hancock, Greensall and Stippler at bay, the Anglo-German pairing finishing fifth.

“I was grateful to see Frank pull off!” said Hancock of his fight with Stippler – as long as it lasted. “But it’s really good fun to race someone that you can trust on what he will be doing next. I enjoyed that very much. And all credit to Niko who laid the foundation by driving a very strong first stint.”

“I was driving the race on the temperature gauge, really, so I had to slow down”, said Spiers, “We were also worried about a gearbox issue but that proved unfounded, so we are pleased that we rescued a podium. And Nigel was incredible, as usual.”

Robin Ward and Ron Maydon bagged a comfortable CLP class win, their Ginetta G4R ending up seventh overall – it could have been sixth but they were pipped across the line by Simon Hadfield in Wolfgang Friedrichs’ Aston Martin DP214. Christian and Wolfgang Molitor grabbed second in CLP in their Lotus Elan 26R, while Jürgen Rudolph took C1 honours in his Porsche 911.

“Yes, it was an easy class win”, said Ward. “But we did well overall too! It could have been one place better, but Simon Hadfield is such a good driver.”

After two laps, Stippler continued to lead, now 2.2 seconds ahead of Ebeling (L.) and Kolb, who had passed Spiers for third. On the next tour, Ward was passed by Lyons, with Ditting and Schoedel moving up at the cost of Fatemi. Behind Müller-Wrede, Paul Friedrichs was on the verge of the top ten in his Aston Martin DP214, after which a big gap opened to Philipp Dressel’s E-type and Caroline Rossi in the C2-class-leading Austin Healey 3000. For now, Jürgen Rudolph had the better of Frank Stricker in their intra-Porsche 911 tussle for C1 honours.

On lap 4, it was duly announced that Stippler had jumped the start and faced a drivethrough penalty. This would open the road for Ebeling and Kolb, who now had Lyons chasing them, the young Briton now also having cleared Spiers. Ward, Ditting, Schoedel, Fatemi and Müller-Wrede continued running in unchanged order, while the most entertaining battle was seen between Rossi, Rudolph and Christian Molitor’s Lotus Elan 26R running third in the CLP class.

15 minutes into the race, Leon Ebeling led Kolb by two seconds, with Lyons now in striking distance, just two more ticks behind. As Stippler resumed in sixth, Ditting had made up three places in one go, as he had also passed Ward and Spiers under his own steam, the entire group trailing the leader by 12 to 17 seconds. 25 seconds behind, Schoedel continued to run in P8, heading Fatemi, Müller-Wrede and Friedrichs.

Soon, Stippler harried Ditting for fourth, having already vaulted Ward, who in turn had passed Spiers, now down in seventh from the Griffith’s pole-sitting start, its engine contuining to overheat, forcing Spiers to slow down and give the Ford V8 a rest for a while. Only moments later, however, Stippler was seen slowing and failing to negotiate the esses, as the E-type crawled its way to the pits. After he went back out, he missed another corner, very likely suffering from brake problems.

At the front, Lyons had closed up on Kolb and was looking to pounce, the pair still running two seconds off Ebeling’s lead. On lap 9, Lyons was up into second place. The fight with Kolb had lost him two seconds, though, as Ebeling had increased his advantage to four seconds. Meanwhile, Rossi reported to the pits to give up on her Austin Healey.

With one hour still to go, Leon Ebeling kept Lyons at bay, leading by five seonds, with Kolb two more seconds adrift. 16 seconds further down the road, Ditting was a lonely fourth, now with 11 seconds in hand on Ward, and 20 on Spiers. Fatemi, Schoedel, Müller-Wrede and Friedrichs remained in the same order, all separated by a safe margin, but from 11th overall Dressel’s E-type was seen coming into the pits for an unscheduled stop, losing it two places.

He was soon given one place back by his countryman Fatemi, whose Porsche 904/6 tailed off into pits and was wheeled back into its garage. At the back, Rudolph continued to lead from Stricker in C1. Now they were falling like flies, as Müller-Wrede’s AC Cobra also pulled off, having lost its oil. This elevated Friedrichs into eighth, ahead of the recovering Stippler, who at the stops would switch to Kolb’s Cobra, with the Molitor/Molitor Elan entering into the top ten.

Towards the pitstops, Lyons was gathering pace, slowly negating his deficit to Ebeling, passing the German on lap 16, just as the first stops were in progress. Ditting made way for Sam Hancock, Spiers traded places with Nigel Greensall, and Paul Friedrichs handed over to Simon Hadfield – allowing three big guns into the field. Schoedel handed his E-type to Leon Ebeling, while Karl-Heinz Wlasik took over from Dressel. C1 runners Rudolph and Sticker also stopped, so now we were waiting for the four leaders to come in.

On lap 19, the first two followed each other in, Lyons handing to Felix Haas, and Ebeling to Andy Newall. Meanwhile, Ron Maydon stepped into the Ginetta that Ward had hauled up into fourth overall. Just after Christian Molitor had handed over to Wolfgang, the last one to come in was Vincent Kolb in the second Gotcha AC Cobra. Kolb had given Frank Stippler a short breather after his countryman had handed Lucas Bschr the wheel of the Jaguar E-type.

After all the stops had panned out, Andy Newall – injured leg and all – led the way, now a healthy 37 seconds in front of Haas, partly aided by longer stops for the cars that carried elite drivers Stippler, Hancock, Lyons and Greensall. Behind Haas, Stippler in Kolb’s Cobra pipped Hancock’s similar machine to third, 51 seconds down on the leader. Maydon was fifth for now, leading the CLP class, but Nigel Greensall was flying in the TVR Griffith, with laptimes five seconds faster than those of the leader! Behind Greensall, Hadfield was making similar progress, the Aston Martin was now the second fastest car in the field, having cleared the E-type of Dirk Ebeling, who in turn had Bscher closing in fast on him.

With half an hour still remaining, Newall looked in control but 42 seconds behind the Briton, Hancock, Stippler and Haas had bunched up into a warring group of three, the former having got back at the two Germans. Soon after, Haas was forced to leave Hancock and Stippler alone in their intra-Cobra squabble. Trailing the trio by half a minute, Greensall was up into fifth and reeling in Haas with five seconds per lap, while Maydon was the safe CLP class leader in sixth overall. Hadfield was seventh but still 35 seconds away from the Ginetta, while Ebeling (D.), Bscher and Rudolph occupied the remainder of the top ten.

As we approached the final quarter hour, the top three were set to lose their battle for second, as the Kolb/Stippler Cobra was measured to have stopped five seconds short – the result was a 5-second stop-and-go penalty. On lap 30, Stippler came in to serve it, costing him two places. Almost simultaneously, Dirk Ebeling was in to retire the E-type shared with Schoedel. Meanwhile, Greensall had closed on Haas and was looking to take possession of what was now third place. On lap 31, Greensall was past.

With five minutes remaining, Newall was coasting home, half a minute clear of Hancock, with Greensall some 23 more ticks behind in third. Haas looked set to lose fourth to the resurgent Stippler, and on lap 35, the two switched places. And so the win went to Leon Ebeling and Andy Newall in their Cobra, followed home by the Ditting/Hancock Cobra, the Spiers/Greensall Griffith, the Kolb/Stippler Cobra and the Haas/Lyons Cobra. Maydon secured the CLP class win in the Ginetta started by Robin Ward, although they were just pipped to sixth overall by the Wolfgang Friedrichs/Simon Hadfield Aston Martin DP214. The Bscher/Stippler E-type was eighth ahead of the Molitor/Molitor Elan taking second in the CLP class. In tenth overall, Jürgen Rudolph led the C1 class from start to finish, to win from Frank Stringer’s similar Porsche 911. 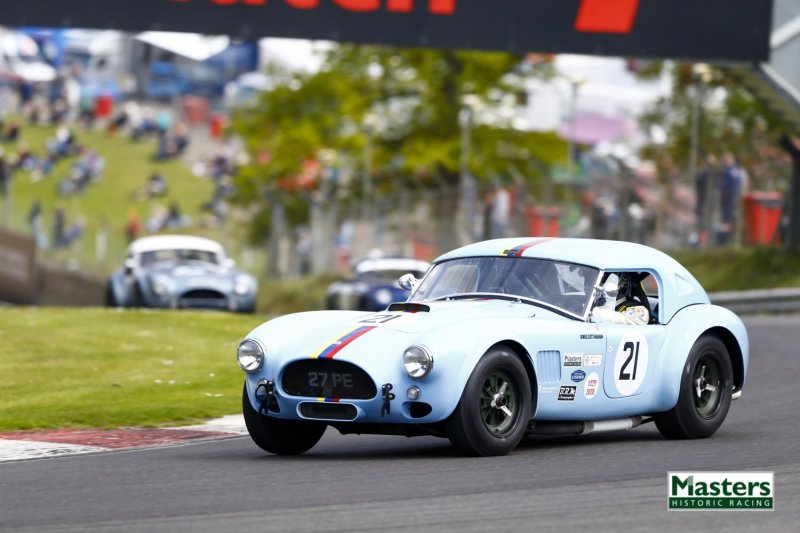