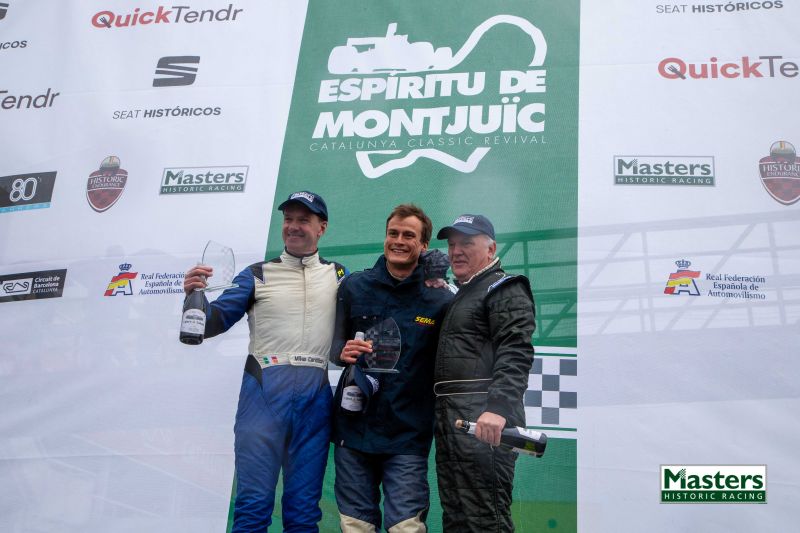 Reigning pre-78 champion Lukas Halusa snatched an unlikely first overall Formula One victory in his newly acquired Williams FW08 as he overtook Mike Cantillon’s Williams FW07C and profited from a mistake by the similarly mounted long-time race leader Christophe d’Ansembourg to take the lead only moments before the safety car came out as a result of Steve Brooks’ Lotus 91 spinning out of fifth place.

“That’s as good as it gets!” said a jubilant Halusa about taking his first overall F1 win on his very first weekend in the Williams FW08. “I went around the outside in the sharp righthander before the chicane – not a likely spot to overtake, but the grip was there. Mike was looking for the grip – and I found it!”

Rain played a pivotal role in the second race of the Masters Racing Legends for 1966-1985 Formula One cars, as scattered drops began to intensify some 15 minutes into the race, causing the grip to change from one corner to the next – and this caused the race to turn around in less than a lap. D’Ansembourg who had stolen the lead from polesitter Brooks early on and kept his teammate Cantillon at bay for seven laps, was the first to spin on the increasingly slippery track. Cantillon, who was following closely, managed to take avoiding action but was now the one to discover where the grip was. Five corners later, Halusa stole the lead – and moments later the safety car was deployed because of Brooks crashing his Lotus. The race finished under the safety car.

“Christophe spun in front of me”, said Cantillon, “so I had to avoid him. Lukas got alongside of me but I managed to stay in front initially. But then it started raining even harder, and I was the first to learn where the grip was. It was just so slippery…”

Saturday’s winner Steve Hartley (McLaren MP4/1) took a close third to the two Williams cars in front, with Mark Hazell (Williams FW08C) doubling up on post-82 class wins by finishing fourth overall, ahead of a recovering D’Ansembourg. In sixth overall, Patrick d’Aubréby remained unflustered by the conditions, taking his second pre-78 class win of the weekend in a dominant form similar to one the Frenchman had already displayed on Saturday. This time, Peter Williams (Lec CRP1) took second in class, having finished third the day before, with Jonathan Holtzman (Tyrrell P34) taking the final podium spot after being forced to take a drivethrough penalty for a jump start.

“It was dry in one place but very wet in the back”, said Hartley, “so it was very tricky out there.”

“I started with very cold tyres”, said D’Aubréby, “and the car felt slower than yesterday. So I kept a safe margin, especially in the period with more rain before the safety car.”

“It did involve a bit of luck, didn’t it?” said a modest Williams about going one better compared to third place on Saturday. “And it was strange with the rain – in one or two corners the grip would be OK, and then it was incredibly slippery at the next!”

The starting grid was created from the result of Saturday’s first race, with its first five finishers in reverse order, so Steve Brooks lined up on pole, with Christophe d’Ansembourg’s Williams FW07C joining the Lotus 91 on the first row. Lukas Halusa’s FW08C and Mike Cantillon’s FW07C shared the second row while Steve Hartley and Mark Hazell made up the third row in their respective McLaren MP4/1 and Williams FW08 cars.

Due to the rare and extreme cold at the Barcelona track, the 25-minute race was started with two laps behind the safety car, and with the first drops of rain falling during the grid walk, a wet race was duly declared. As soon as the green flag was waved, with 17 minutes still remaining, Brooks shot away into the lead, but braking for turn 4, D’Ansembourg hit the front, soon followed through by Halusa and Cantillon, as Brooks dropped three places in the course of four turns.

Cantillon then nipped past Halusa to snatch second before lap 4 had even started, with Hartley now through into fourth, demoting Brooks one further spot. Hazell was sixth, leading Patrick d’Aubréby in the top pre-78 car, with Higson’s McLaren MP4/1B and Jonathan Holtzman in the Tyrrell P34 up next, the American occupying second place in the pre-78 class, but only by virtue of a jump start – for which he would soon need to serve a drivethrough penalty.

As Abbott’s Arrows A4 came into the pits, D’Ansembourg still managed to keep his teammate at bay, with Halusa and Hartley making it a four-car lead group. Into lap 5, the order remained unchanged, but at the back Bob Blain also called it a day in his Beta-liveried March 761. Behind the top four, Brooks and Hazell returned to their fight of the day before while D’Aubréby again ruled imperiously in the pre-78 class.

Next time around, however, with the rain at the back of the circuit ever increasing, it was all change, as D’Ansembourg dropped it halfway into lap 8, losing four places as a result, with the additional outcome that five corners later Halusa jumped Cantillon to snatch the lead. At the same time, Brooks went off at turn 6 to evoke the renewed presence of the safety car. So now it was Halusa from Cantillon and Hartley, with Hazell in fourth ahead of D’Ansembourg, D’Aubréby, Higson, Vincent Rivet in the March 811 and Peter Williams in the Lec CRP1, the latter moving up into second in the pre-78 class, as Holtzman took his drivethrough penalty.

As the clock ticked away, the race was set to finish under the safety car, and the result was that Halusa took a surprise first overall win in his first weekend with the FW08. As on Saturday, Cantillon was the runner-up, this time in front of Hartley, who completed the podium. Hazell took the post-82 class win, while D’Aubréby became the runaway pre-78 class winner for the second day running. The Frenchman was followed home by Higson, Rivet and his nearest class rivals Williams and Holtzman. 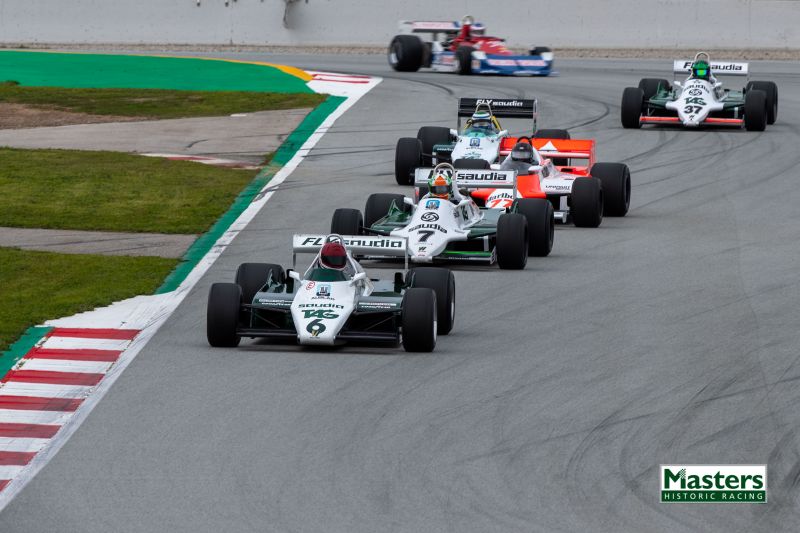 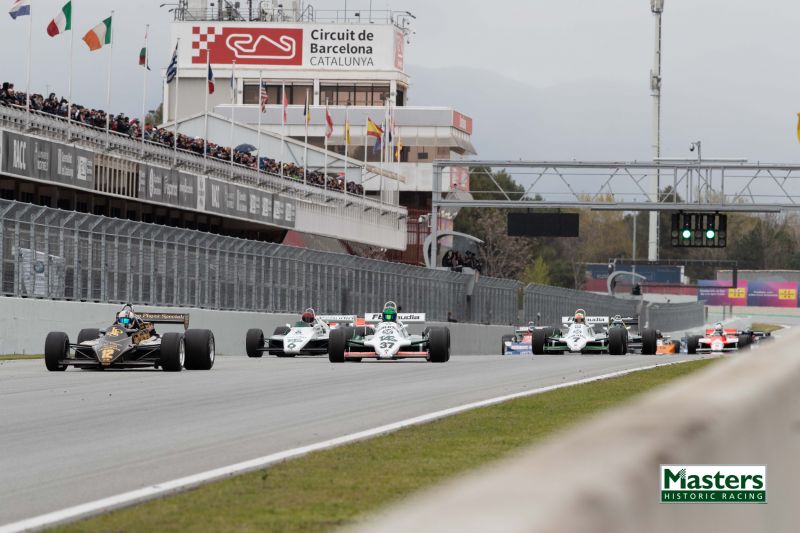 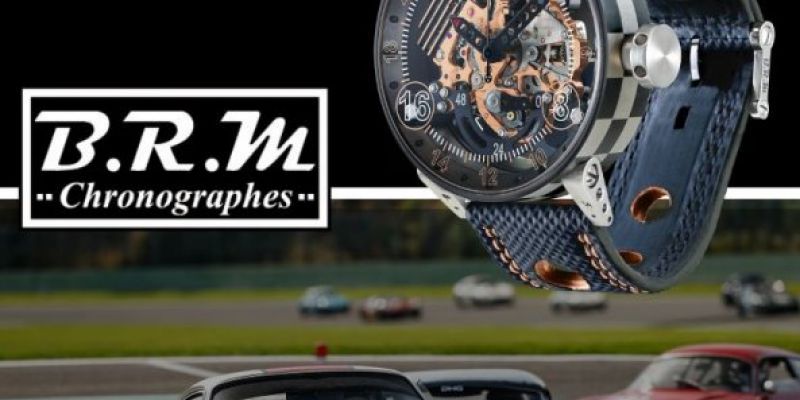