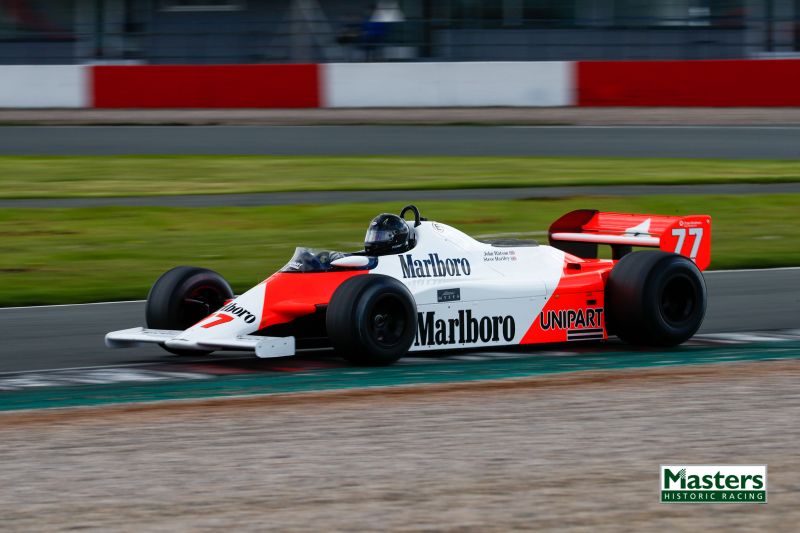 It took Steve Hartley 22 fighting laps to cut down the gap to long-time leader Martin Stretton, but at the start of lap 23 – the penultimate lap of the first Masters Racing Legends race at Donington Park – the McLaren MP4/1 passed the Tyrrell 012 on the start-and-finish straight to steal the win from Stretton.

“I think Martin had the pace over me today”, said a magnanimous Hartley. “A couple of times I thought I was reeling him in, and some backmarkers played to my advantage, but at the end he was weaving. I think he was running out of fuel.”

“No, it was a fuel pick-up problem”, Stretton explained. “We thought we’d solved it, but it was great while it lasted.”

Greg Thornton took third in the Lotus 91, having fought his way back up after losing out at the start. His final scalp was surprise polesitter Ken Tyrrell in the Tyrrell 011, who ended up in fourth, two seconds down on Thornton and 14 seconds on winner Hartley. Steve Brooks was fifth in the Lotus, winning a race-long fight with Mark Hazell, who behind Stretton took second in the post-82 class.

“At the start, I got stuck behind several people, so I had to fight back past them”, said Thornton. “But that Ken Tyrrell can pedal, he was driving the wheels off of it! He was faster on the straights and kept breaking the tow, but we got there in the end.”

In the Lec CRP1, Ron Maydon battled all race with Marc Devis for the pre-78 class win, the Belgian getting ahead on lap 18 before his Surtees TS16 suddenly cut out on the next lap, handing Maydon the class victory.

Having moved from chilly Barcelona to sunny Donington, the F1 field got underway in the most ideal of spring conditions, with on this occasion Ken Tyrrell leading away into Redgate. However, fellow front-row sitter Martin Stretton had soon pipped Tyrrell for the lead, while David Shaw in the Arrows A4 was doing everything to hold off Steve Hartley in fourth. Kubota, Hazell, Thornton, Brooks and Briggs were up next, with Ron Maydon leading the pre-78 class in the Lec CRP1.

Next time around, Stretton’s lead had increased to 2.4 seconds, as Hartley had found a way past Shaw and was now harrying Tyrrell going into lap 3. Shaw now had to deal with Kubota’s Lotus 91, while Thornton’s 91 had moved ahead of Hazell in the Williams FW08. Maydon was still keeping Marc Devis’ Surtees TS16 at bay for the pre-78 class lead.

On lap 4, Stretton led Hartley by 4.2 seconds, leaving Tyrrell to fight over third with Shaw, but on the next lap, Hartley set fastest lap of the race to inch closer to the leader while Shaw was relegated to fifth by an attacking Kubota. Stretton answered on the following lap by beating Hartley’s best, lifting his lead back up to 4.4 seconds. Further back, Briggs’ McLaren M29 had lost two places to drop behind Brooks’ Lotus 81 and Maydon’s Lec CRP1, while the race was all but over for Shaw, his Arrows A4 heading into the pits, only to come back out dead last, four laps down. A lap later, Briggs followed Shaw in, his Cosworth overheating.

Eight laps into the race, Stretton’s lead over Hartley was down to 3.8 seconds, Ken Tyrrell having dropped eight seconds to the pair of them, while Kubota’s attack began to falter, as fellow Lotus 91 driver Thornton nipped past for fourth. 23 seconds down, Hazell and Brooks continued arguing over sixth place.

Hartley now connecting a string of fastest laps, the gap to Stretton had steadily dropped to 3.4 seconds, as Thornton closed down on Tyrrell in third, 13 seconds down on the leader. Behind them, Kubota’s Lotus had seriously lost pace, allowing Brooks and Hazell to move up into fifth and sixth, and they were soon followed through by Maydon and Devis who still squabbled over the pre-78 class lead, the two separated by less than a second. Meanwhile, Mark Harrison’s Shadow DN9 pulled off at the back, with Kubota also failing to complete the lap.

13 laps gone, and with ten minutes left on the clock, Stretton continued to keep some 3.5 seconds in hand over Hartley. Ken Tyrrell was still keeping Thornton at bay, while Brooks and Hazell were similarly tied by a second-long string, but some 27 seconds further down the road. Maydon and Devis formed the fourth pair of cars battling for position, the Lec still leading the pre-78 class, now just three tenths ahead of the Surtees in eighth overall. On lap 18, however, the Belgian finally did it to take command of the class.

A lap later, however, Hartley having cut down his deficit less than two seconds, Stretton was slowly getting into trouble, desperately weaving across the track to get the fuel in while losing yet more of his advantage the next time around, while behind them Thornton had finally taken Tyrrell to move up into third place. Meanwhile, Devis’ tenure in the pre-78 class lead had lasted a mere lap, the Belgian guiding his Surtees into the pits at the end of lap 19.

Going into lap 23, and with just 20 seconds remaining on the clock, Hartley pounced on the straight to grab a hard-fought lead. And so, after 24 laps, Hartley came home as the victor, Stretton having given up to follow the McLaren home 4.4 seconds later, with Thornton in third, 14 seconds down on Hartley and with two ticks in hand on Tyrrell. Brooks and Hazell were fifth and sixth, while Maydon in seventh took the pre-78 class win. 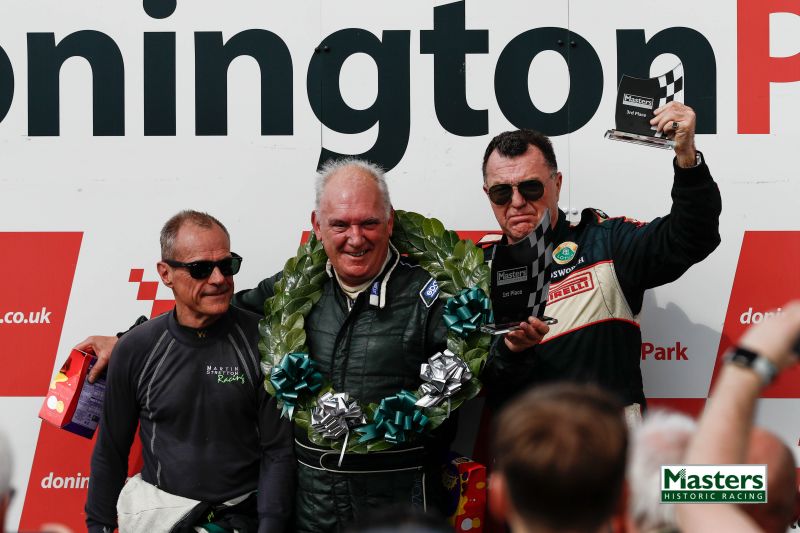 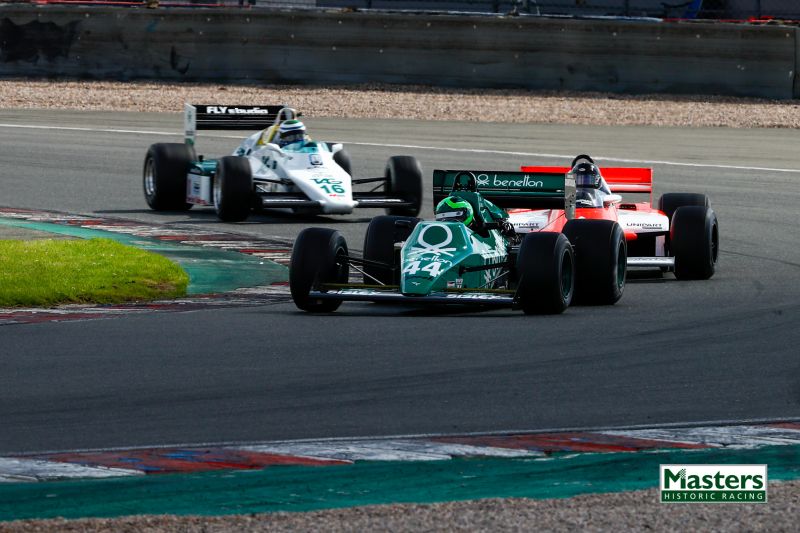 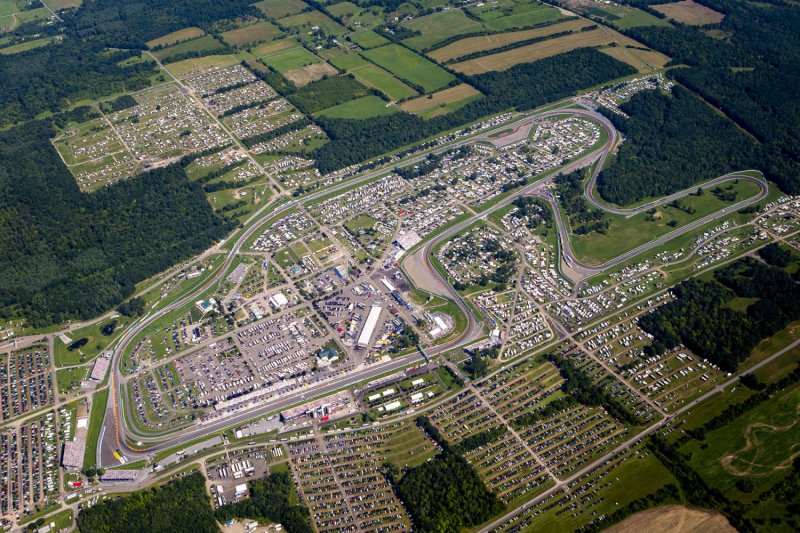