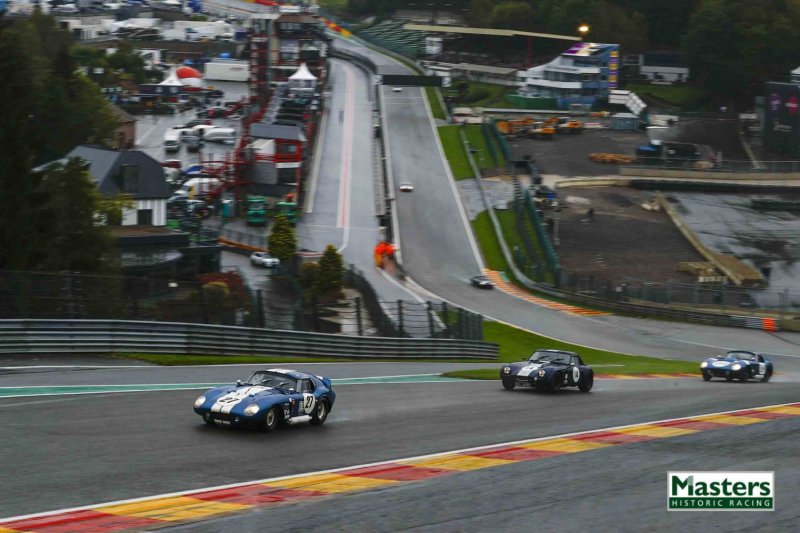 Andrew Jordan and Roy Alderslade dominated from start to finish to claim a resounding win in the 90-minute Masters Gentlemen Drivers enduro at the Spa Six Hours meeting. Their Shelby Cobra Daytona Coup? led away from pole and never looked back once Jordan had Sam Hancock?s challenge covered, the latter sharing a similar Cobra Daytona Coup? with Nikolaus Ditting.

In the final half hour, Andrew Haddon?s Lotus Elan nipped passed Ditting and looked set for a stunning second place overall, but in the second part of the race Phil Keen stormed through the field in the Jaguar E-type started by Lee Mowle to not just steal third overall from Ditting on the penultimate lap but also second from Haddon on the final lap. Haddon still brought home an equally shattering CLP class victory, well ahead of the Elans of Graham Wilson/David Pittard in ninth overall and Sander van Gils in 12th overall.

Despite taking a couple of penalties for exceeding track limits, Manfredo Rossi shone to take an exceptional fifth overall in his Porsche 911, as the C1-class-winning car proved ultimately suited to the track?s slippery conditions. The Italian stayed on the lead lap to win from the Sean McInerney/Phil Quaife TVR Grantura that slipped past the Mark & James Bates 911 on the final lap.

Chris Clarkson and David Smithies led the C2 class all the way to the chequered flag, beating their Austin Healey 3000 rivals Mark Pangborn and Harvey Woods.

As in the Masters Pre-66 Touring Car race the hour before, the field left the starting grid while under safety-car conditions, given the slippery surface of the Spa-Francorchamps track, but as the rain had increased in intensity, this time they were given a full two laps to get acquainted with the treacherous circumstances.

On lap 3, though, Andrew Jordan doing the opening stint in Roy Alderslade?s pole-sitting Cobra Daytona Coup? stormed off to a six-second lead over Sam Hancock?s similar car, the latter?s co-driver Nikolaus Ditting also having opted for the second stint. Third was Nigel Greensall, running a similar plan with John Spiers in the TVR Griffith, while the lightweight cars of Andrew Haddon (Lotus Elan) and Andrew Smith (sharing a Porsche 904 with Olly Bryant) proved ideal for the conditions.

The E-types of Lee Mowle and Laurent Jaspers were up next, with Chris Clarkson showing his wet-weather skill with ninth overall in his C2-class Austin Healey 3000. Sander van Gils in another Elan was fighting Ron Maydon?s Ginetta G4R for ninth ? until the Ginetta headed for the pits to drop down to 20th overall. Profiting from more lightweight prowess, the C1-class top trio of Mark Bates (Porsche 911), Sean McInerney (TVR Grantura) and Manfredo Rossi (in another 911) had leadfrogged the invitational Alfa Romeo TZ2 of Alex Furiani. In the meantime, two Elans had disappeared from the back: the examples of Belgian Luc De Cock and German duo Christian & Alexis Graf von Wedel.

At the front, seven seconds separated Jordan and Hancock at the end of lap 4, as the leader settled down from his opening blast. The pair had dropped Greensall by 20 seconds, and the TVR was rapidly falling into Haddon?s clutches, and on lap 8, the leading Lotus Elan was up into third.

Haddon?s wasn?t the only nippy machine putting the circumstances to good use. Sliding and drifting while extracting the most from his Porsche 911?s superior traction, Mark Bates was now up into a stunning fifth overall while tagging along class rivals McInerney and Rossi. This demoted Mowle and Jaspers to eighth and ninth respectively, still chased as they were by Clarkson?s Healey. In 11th overall, Van Gils was a steady second in the CLP class, as Smith?s Porsche 904 had fallen away by the wayside. Furiani?s TZ2 was 12th ahead of Mark Pangborn in the second Big Healey.

At the 30-minute mark, with one hour still to run, Jordan had eeked out a 10-second lead over Hancock, with Haddon and Greensall giving chase a further 45 seconds behind. Bates, McInerney and Rossi still formed a three-car C1-class train that had left the E-types of Mowle and Jaspers some 25 seconds behind.

However, the race?s excitement took a hit when a 23.2-second time penalty was issued out to Hancock, the second-placed driver one of six cars that had been caught overtaking during the initial safety-car laps. Other slammed by the penalty were Jaspers, his countryman Guy Mortreu in another E-type, Dean DeSantis? Porsche 911 in 14th overall and Stuart Tizzard in the Elan now 18th overall. The sixth car punished was Clarkson?s Healey and this put Pangborn right back in contention, as his Healey had been trailing Clarkson?s example by exactly 23 seconds!

As the pit window opened, Hancock was the first to come in for a driver change, followed by Haddon, Mortreu (handing over to Didier Forrier) and Graham Wilson who would leave David Pittard in charge. Next up were McInerney, making space for Phil Quaife, Jaspers (driving solo) and Mowle, handing over to Phil Keen. On lap 12, Greensall swapped around with Spiers, with Rossi joining the TVR in the pits. Meanwhile, Guy Peeters in the sole A-class Lotus XI, handed over to Guillaume Peeters. One lap later, Jordan used the final opportunity to swap with Alderslade, with Van Gils, Clarkson (handing over to David Smithies) and DeSantis (handing over David Hinton) coming in on lap 13 as well. Right at the front, though, it looked like Mark Bates had missed the window ? or hadn?t he? Either way, it was close!

On lap 14, with 36 minutes remaining, everyone had done their stop, and now Alderslade led Ditting by 38 seconds, the second Cobra Daytona Coup? having served its penalty at the stops. Haddon was still third, a full minute down, but lapping faster. Spiers was fourth, 45 seconds down on the Elan, while Rossi had pipped the Bateses at the stops ? but the Italian was subsequently hit with a 10-second time penalty for exceeding track limits one time too many. This meant that Italian had some work to do as he held a 7-second lead over James Bates. Phil Keen was seventh and flying, having just passed Phil Quaife in the Grantura that was now third in the C1 class. Furiani and Jaspers were next, ahead of Van Gils who for the moment controlled second place in the CLP class but had to fear the arrival of David Pittard, who in turn was about to jump the C2-class fight between Smithies (still in the lead) and Harvey Woods (having taken over from Pangborn).

At one-hour point, Alderslade was running away from Ditting, now leading by 48 seconds, while the German was under increasing threat from Haddon who was just ten seconds away. Rossi had vaulted Spiers, who now had to defend from Bates (J.) but it wouldn?t take long before Keen would catch and pass both. There was no change with Quaife, Furiani and Jaspers behind them, but Van Gils was about to fall prey to Pittard. In C2, Smithies proved to have the legs on Woods, as he further secured his class lead while remaining in 13th overall. It certainly helped that Clarkson and Smithies? safety-car penalty was revoked. In fact, the Pangborn/Woods Healey was one of four cars under investigation for missing the pit window, along with the Bates/Bates Porsche, the Tizzard/McCarthy Elan (up for its second penalty!) and Hans-Georg Haussener in the sole B1-class Alfa Romeo Giulietta SV.

On lap 16, the Cobra Daytona Coup? 1-2 was gone, Haddon moving ahead of Ditting, both of them well over a minute behind the all-conquering Jordan/Alderslade snake. The mercurial Keen had cut clean through the C1-class leaders to be fourth, but a minute in arrears of Ditting. This meant that Rossi, Spiers and Bates (J.) were now fifth, sixth and seventh. Further back, Pittard had indeed passed Van Gils for second in CLP class.

With Alderslade still lapping comfortably faster than Haddon, nothing seemed to stand in the way of a resounding win for the Shelby Cobra Daytona Coup? duo. As the final minutes ticked away, Alderslade reeled off the laps to a winning margin of well over one-and-a-half minute ? not on Haddon, though! Right at the end, not just Ditting but Haddon too was forced to succumb to Keen?s late charge to hand second overall to the Mowle/Keen combo.

In fifth overall, Rossi survived the scare of another penalty for exceeding track limits to still take the C1 class win. The Greensall/Spiers TVR was sixth, leading home the McInerney/Quaife Grantura that pipped the Bates/Bates 911 at the last gasp, as the latter two cars filled the remaining C1 top spots. In ninth, the Graham Wilson/David Pittard took a distant second in the CLP class, ahead of Sander van Gils who finished 12th overall. Chris Clarkson and David Smithies cornered the C2 class win with their Austin Healey 3000, the pair fending off the similarly equipped pairing of Mark Pangborn/Harvey Woods. 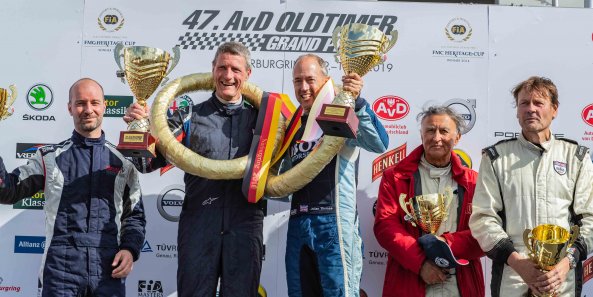 Charles Persico did it again!