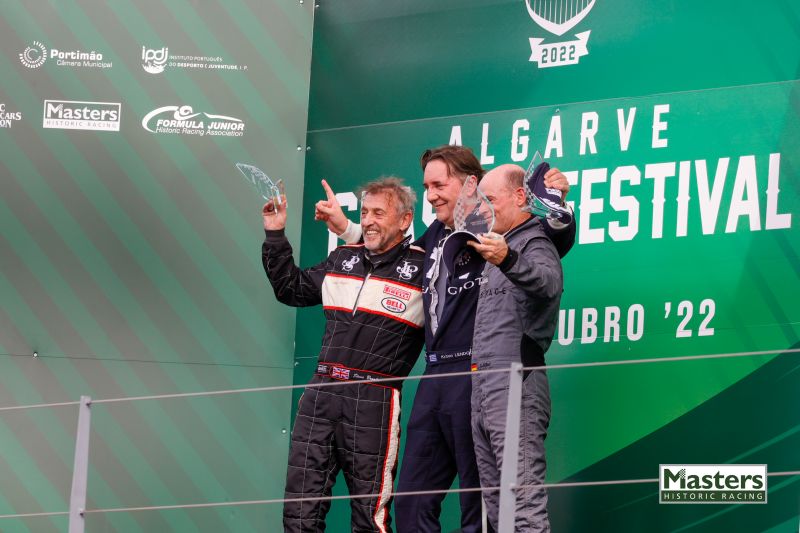 Kriton Lendoudis charged up from fourth on the grid to claim a fighting win in the first Masters Endurance Legends race at Portimão. The Greek got up to his true speed halfway into the first stint when his Peugeot 908 powered past the quick-starting Lola-Judd B12/60 of David Brise, having already made up a spot after Richard Meins’ Peugeot 90X dropped away on the second lap. Lendoudis then chased and caught Steve Brooks in the other 90X. Brooks had led the opening half of the race, but spun on the out lap after his mandatory stop, having exited the pit still narrowly ahead of his rival.

“I think my best lap was my last lap!” said Lendoudis about gaining ever more pace during the race. “I wasn’t saving my tyres at the start, it’s just how I am – I’m always a slow starter, and then I get better and better towards the end! It was fun, this was a great race.”

“I managed to get out in front at the stops”, said Brooks about his efforts to maintain the end. “But then I pushed too hard at the top of the hill. It seemed very slippery on that spot, the Lola spun there the lap before.”

Having started from the pitlane, Christian Gläsel performed heroics to haul his Pescarolo-Judd 01 all the way up to third, passing Stuart Wiltshire’s Ligier-Judd JSP2 – that took a strong P2 class win – and Olivier Galant’s HPD-Honda ARX-03a in the final two laps. Behind the recovering Meins in sixth, Mike Newton ran home second in the P2 class in his MG-Lola-AER EX257, with the invitational Ligier JSP3-20 of Lee Mowle and Phil Keen in eighth.

“We started about 40 seconds later than everybody else!” said Gläsel about starting from the pitlane. “It’s our first time with the car, and in practice and qualifying we had lots of issues with the power steering. Fortunately, now the steering was good, so I survived!”

Following an early lunch, the Masters Endurance Legends field lined up for its first race of the Algarve Classic Festival weekend. Christian Gläsel’s Pescarolo-Judd 01 would be starting from the pitlane, the car still suffering from the power-steering issues that had marred it since the start of the weekend. Headed by the three Peugeots, Brooks led Meins around on the first lap, but in the Lola B12/60, David Brise made an immediate impact by picking off Lendoudis for third. Wiltshire was fifth and in the P2 class lead, followed by Olivier Galant’s HPD ARX-03a, Lee Mowle in the invitational Ligier JSP3-20 and Craig Davies in the P3-class-leading Ligier JSP3-15.

Up front, meanwhile, Meins dropped away to allow Brise into second place, now trailing Brooks by 2.6 seconds. Lendoudis was third, four seconds adrift of the leader, while Wiltshire’s deficit on lap 3 had increased to 15 seconds. With a few strong opening laps, Mike Newton had hauled his MG-Lola EX257 up to fifth, having demoted Olivier Galant. Next up were Mowle, Maydon, Mike Furness in the Courage-Judd LC75, and GT class leader Jason Wright in the Ferrari 458 GT3, but the recovering Meins was closing fast, as was Gläsel from his pitlane start. Soon, Wright was left to directly fight his nearest GT rival, Xavier Galant in the Ferrari 458 GTE, with Stephan Joebstl in the Ligier JSP3-17 right in the middle of that.

Five laps into the race, Brise wasn’t letting Brooks off the hook – on the contrary, since the ex-Rebellion Lola had cut the gap to the Peugeot 90X to 1.4 seconds, with Lendoudis keeping a close watch 1.6 seconds behind Brise. Wiltshire and Galant were on their own, but Newton was still battling Mowle, the pair of them seven seconds ahead of Davies, with Furness a further 17 ticks behind. Gläsel and Meins were closing on the Courage fast, though.

Into lap 7, Brooks had found a rhythm that helped slowly build his lead over Brise again, that was now back up to 3.7 seconds. Lendoudis had similarly found pace, the Greek producing purple sectors to inch closer to Brise. The next time around, Lendoudis put in the fastest lap of the race so far.

Entering lap 9, the field was now welcome to come in for their mandatory mid-race stop, and Joebstl was the first to make use of the occasion, the Austrian handing the wheel over to Andy Willis in their fight for the P3 class title with the Craig Davies/Ron Maydon pairing. For a while, there were no other takers, until Mike Newton and Lee Mowle decided it was time, the latter handing over to Phil Keen.

On lap 10, making use of his newly found pace, Lendoudis’ 908 breezed past Brise to set after the leading Peugeot that was now 4.8 seconds up the road. Next in were Gläsel’s Pescarolo, Xavier Galant’s 458 GTE, Furness in the Courage, and David Brise who would swap places with Alan Purbrick.

On lap 12, Lendoudis continued to fly, crushing his own fastest lap of the race with another four-tenths before both he and Brooks came in simultaneously – the heat was on. Shortly after, Davies came in to hand over to Maydon, while Olivier Galant’s noisy HPD was in next. Now only Wiltshire, Meins and Wright still stayed out, but their respective Ligier, Peugeot and Ferrari pitted at the end of lap 13.

After all the stops had panned out, it became apparent that Brooks had lost out, a spin on his out lap having cost him half a minute to Lendoudis, who was now sailing in free air, well up the road from everyone else. Wiltshire was a solid third, 57 seconds down on the Greek, with the younger Galant now up into fourth in the HPD. Gläsel and Meins were in fifth and sixth now, leading Newton, Keen and Maydon, as Purbrick had dropped down to tenth, ahead of Furness and Willis, who was looking at a deficit of well over a minute to his class rival Maydon.

As the clock ticked down, Lendoudis nursed his lead while occasionally producing more fastest laps just to have fun, the Greek increasing his advantage to 38 seconds. On the penultimate lap, Gläsel pushed through to pass Wiltshire and Galant for third after a valiant drive through the field. Meins was a lapped sixth ahead of Keen, while Newton took second to Wiltshire in the P2 class. Purbrick ran home ninth ahead of the P3 class fight between Maydon and Willis, the former keeping well over a minute in hand to lift the class win. Behind Furness, who took third in P2, Wright grabbed the GT spoils from Xavier Galant. 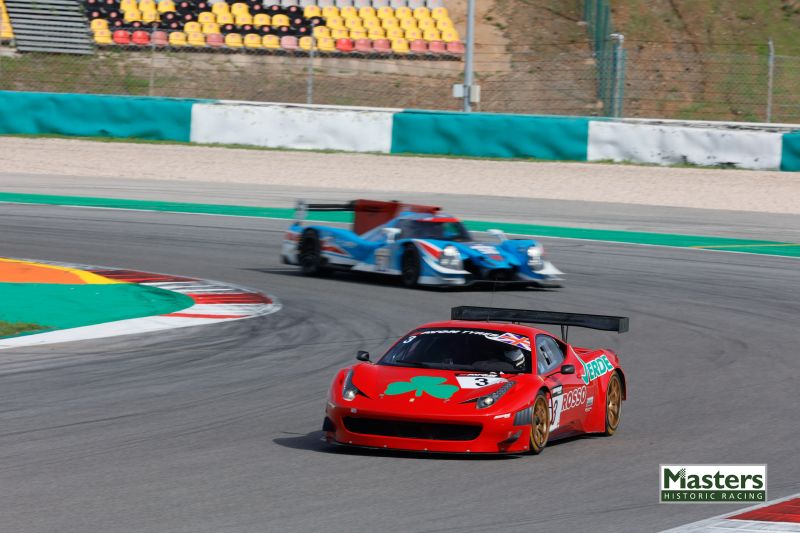 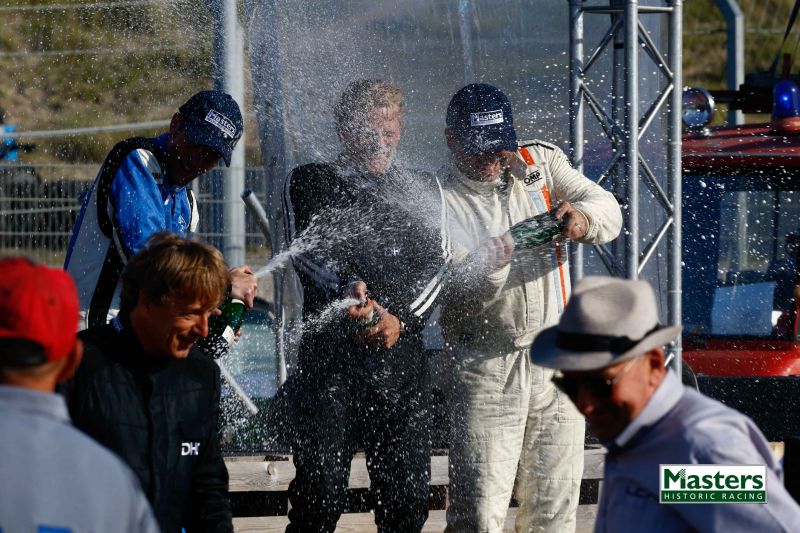