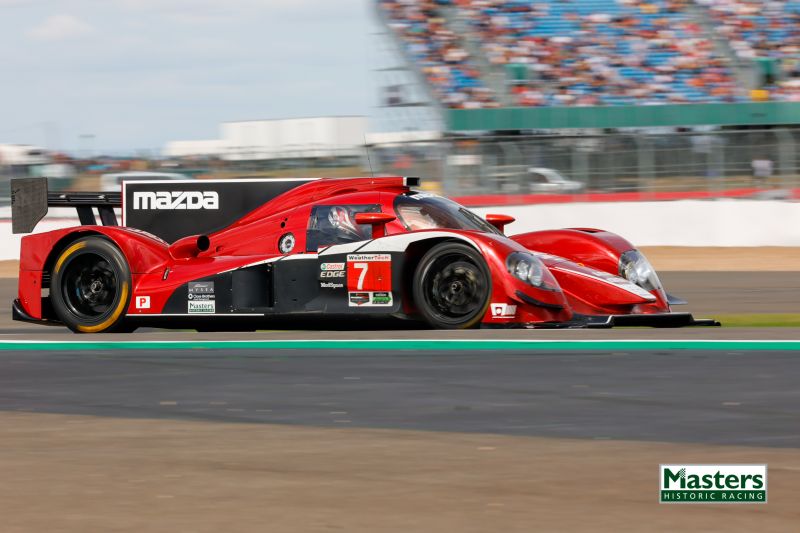 RESULTS UPDATE: Timothy De Silva’s spectacular last-corner win in today’s second Masters Endurance Legends race was taken away from him after the stewards penalised the American for overtaking Michael Lyons while exceeding the limits of the track. The one-second time penalty handed to the Pescarolo 01 driver meant that Lyons in the P2 Lola-Mazda B12/80 took the overall win after all.

“That was a real fun race!” said a happy De Silva. “Definitely the safety car helped me out, but that made up for yesterday. I had a great fight with Michael, that last lap was a blast! I didn’t know where his car ended and where mine started…”

“To be in a position to fight with these P1 men – what a fantastic opportunity”, said a proud Lyons. “The amount of effort the guys put in to get this car up and running in 14 weeks is just incredible.”

Steve Tandy’s Peugeot 90X took third after challenging Constable initially before losing a spot to the charging Lyons. He was followed home by Keith Frieser’s Zytek 09S, Christophe d’Ansembourg’s Lola-Aston Martin DBR1-2 and Stuart Wiltshire’s Ligier JSP2, the latter snatching another second place in the P2 class. The other Peugeot 90X of Kriton Lendoudis took seventh ahead of P3 class winner Rob Hall, who made up for losing Saturday’s class win on the final lap.

“It was really good”, said Tandy. “Michael got me on pace, but I was quite happy to be sitting there, knowing I would get them at the stops. But unfortunately, the safety car changed everything…”

Lining up for their second race at the Classic on a sunny and bright Sunday at Silverstone, the Masters Endurance Legends started in the order of yesterday’s result, with Jamie Constable’s Pescarolo 01 leading Steve Tandy’s Peugeot 90X, Michael Lyons in the AER-engined Lola-Mazda B12/80, Keith Frieser’s Zytek 09S and the second Peugeot of Kriton Lendoudis, with Stuart Wiltshire in the Ligier JSP2 in sixth.

Locking up on cold tyres into the complex, Constable only narrowly hung on to the lead on the opening lap, while Alan Purbrick’s Lola B09/80 did indeed spin and was left beached on the grass before it was liberated to get going again. The top three remained unchanged after the first lap, but Lendoudis had moved up into fourth, with d’Ansembourg demoting Wiltshire to sixth. Into Brooklands, however, Lyons pushed through to pass Tandy for second. Further back, Rob Hall led the P3 class in tenth while in 16th overall Andie Stokoe was in the first of the GTs, as the Ferrari 458 GT3 was chased by Niko Ditting’s glorious GT1 Aston Martin DBR9. In 11th overall, after starting from the back, Timothy De Silva had already made up a huge number of places in the other Pescarolo 01.

After three laps, Constable led Lyons by just six tenths, with Tandy another half a second back. Lendoudis was five seconds away, with Frieser, d’Ansembourg and Wiltshire following with neat two-second gap in between them. Mike Newton’s MG-Lola EX257 was eighth, and third in P2 behind Lyons and Wiltshire, while De Silva was now up into ninth ahead of P3 class leader Hall, whose rivals Marcus Jewell and Andy Willis were split by Mark Higson’s ORECA-Nissan 03, fourth in the P2 class.

Meanwhile, the GT class battle was heating up, as Angus Fender’s Dodge Viper has made its way up from the back to challenge Stokoe for the lead, having dismissed Ditting and Colin Sowter’s 458 GT3 in quick succession, as ten minutes into the race the pit window opened.

The three leaders continued nose-to-tail, now 12 seconds up the road from Lendoudis and Frieser, the Canadian closing up on the Greek, as Marcus Jewell was first one in to hand over to Ben Clucas, while Andie Stokie made way for David McDonald. Soon after, Lendoudis spun fourth place away to drop down to eighth, while race leader Constable was given a scare when backmarker Steve Osborne in the ex-Felbermayr Porsche 911 GT3 RSR turned in on him into Copse. It bent the Porsche’s wheel rim but Constable was able to continue – or was he? Having lost the lead to Lyons, the Pescarolo was seen spinning at the same corner when his own tyre delaminated as a result of that contact with the Porsche.

Meanwhile, Tandy, Frieser and d’Ansembourg all pitted, allowing De Silva into a stunning second place, having just set a stunning fastest lap of the race, now followed in third by Wiltshire. Newton and Lendoudis were next, and Lyons, De Silva and Wiltshire followed them in on the next lap. With all the elite and elite-plus driver penalties coming into effect, the order was set to change significantly – however, when the safety car came out to allow for the safe recovery of Constable’s stranded Pesca, all remaining gaps evaporated…

As the Pescarolo was sitting on its back, its retrieval took quite a long time. So when the safety car finally moved out of the way,  less than two minutes remained on the clock, enough for one flying lap. Lyons narrowly led De Silva, with Tandy, Frieser, Wiltshire, d’Ansembourg, Lendoudis and P3 class leader Hall. Lyons had to pull out all the stops to defend his slender lead, making his P2 Lola as wide as possible, but in the final corner De Silva powered the P1 Pesca towards victory – from 26th on the grid! Tandy snatched third from Frieser and d’Ansembourg, with Wiltshire taking second in the P2 class.

Behind Lendoudis, Rob Hall made up for his final-lap loss of the class win the day before, winning from Willis/Joebstl and Jewell/Clucas, while Andie Stokoe and David McDonald made it two GT victories from the weekend, again winning from Ditting and Sowter. 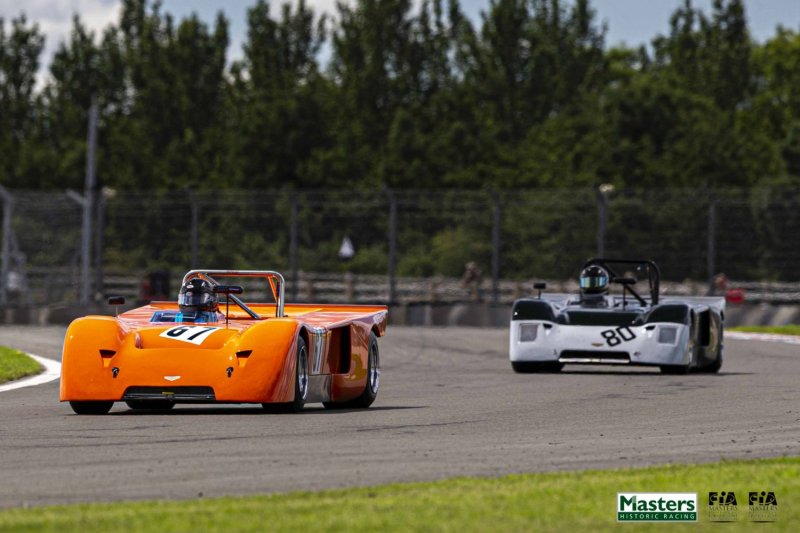