David Porter took a lights-to-flag victory in the first Masters Endurance Legends USA race of the Masters & HSR Race Weekend at Watkins Glen. Having started from pole, the Peugeot 908 driver was kept honest by John Reisman in the Whelen-liveried Coyote Corvette DP in the initial stages of the race but the LMP1 car disappeared out of Reisman’s sight after the mid-race stops.

Tommy Byrne (ORECA-Nissan 03) finished third in the quickest LMP2 car, the former F1 driver jumping Travis Engen’s Audi R8 LMP1 for third at the stops. Engen then dropped into the clutches of Chris Ronson Jr, whose ORECA-GM FLM09 moved up into fourth a few laps from the end.

Scooter Gabel impressed by leading all the way to the GT category, his 1997 BMW M3 GTR from the USRRC days beating two much younger Audi R8 LMS GT3 cars, Bruce Leeson leading the Audi challenge at first before giving way to the David Roberts/Mike Skeen example.

On the first lap, Porter lay down the gauntlet in the hope of opening up a gap to Reisman, the Peugeot lapping 1.1 second faster than the Coyote. Engen remained in third but had ex-F1 driver Tommy Byrne in the Hagan/Byrne ORECA 03 hot on his heels, while the Ronson ORECA FLM09 had swept past Danny Baker’s similar 03. Bob Blain’s race in the glorious ex-ESM Patrón Tequila HPD-Honda ARX-03b was over right away, though, the car’s diff having given up.

Three laps gone, and Reisman wasn’t giving up on his chase of the Peugeot, trailing by a commendable two seconds. Engen and Byrne were dropped by 14 seconds, with Ronson Jr three seconds further back. Francesco Melandri in the Ligier JSP3-15 LMP3 was next, followed by William Hubbell and Robert Tornello in the other two Coyote Corvette DPs in the field. In GTs, Gabel had hit the front, with Leeson in second and Roberts in third.

As the pit window approached, Reisman was in fact knibbling away at Porter’s venerable lead, the gap now down to 1.4 seconds, as the pair disappeared from Engen and Byrne’s sight, those two now over 20 seconds behind. On lap 6, Byrne and Reisman were the first to blink and went in for their mandatory pitstop. Engen was in on the next lap, leaving Porter out on his own in front, as Baker and Tornello for the moment moved up into second and third. Then on lap 8, the leader came in.

When on lap 9 the field had settled back in after the stops, Porter led Reisman by nine seconds, while Byrne had jumped Engen at the stops, the Irishman now 27 seconds away from the lead but nine seconds ahead of the ex-ALMS Audi. Ronson Jr was fifth ahead of Baker, Melandri, Hubbell, Tornello and Dominick Incantalupo in the second GM-engined ORECA FLM09. In GTs, Gabel still led, now in 11th overall, the Chevrolet Dallara DP of Kurt Schultz splitting the lead GT cars as Bruce Leeson’s Audi R8 LMS GT3 ran 12th.

At the front, however, Porter had started to stretch the Peugeot’s legs, the LMP1 machine running away to an 18-second lead, as Byrne began to close on Reisman in second place. Meanwhile, Ronson Jr had passed Engen for fourth in his former LMPC-class machine. In the GT class, Gabel was now trailed by the fast approaching other Audi started by David Roberts but switched to the hands of the quick Mike Skeen, who had passed Leeson to move into second place in class.

His work done, Porter crossed the line 19 seconds ahead of Reisman, who kept 22 ticks in hand on Byrne in third. Ronson kept Engen at bay to claim fourth, with Baker, Melandi, Tornello, Hubbell and Incantalupo up next. Gabel notched up the GT class in the oldest car in the field, his BMW M3 GTR keeping 28 seconds in hand over the Roberts/Skeen Audi, with Leeson in third. 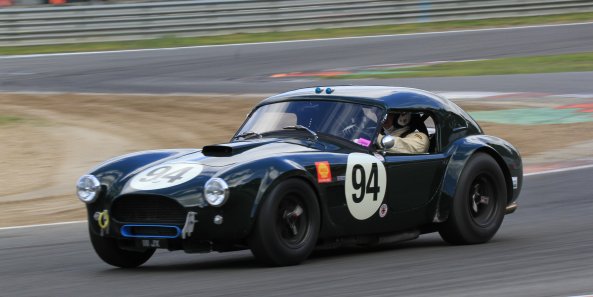