After starting second and finishing fourth in yesterday’s incident-shortened race, David Porter cruised to a well-deserved win in this morning’s Masters Endurance Legends race here at the WeatherTech International Challenge with Brian Redman.

After passing Travis Engen and Keith Frieser on lap 1, Porter (2007 Peugeot 908 HDI) got around pole-sitter Joel Quadracci (2013 Oreca 03) on lap 2 and steamed into a lead he relinquished only briefly during the mandatory pit-stop cycle mid-race.

This morning’s win was doubly enjoyable after being caught out by yesterday’s extended caution period during and after the pit-stop cycle, Porter said.

“Yesterday, I had no luck. Today everything worked in our favor,” he said.

In spite of a hot and slippery track, his car was “brilliant, as it always is,” Porter said. “GMT-what a job they do on the car. It ran faultlessly all weekend.”

Slotted between Porter and Quadracci was yesterday’s pole-sitter Craig Bennett (2012 Lola B12/80), who yesterday retired with electrical problems on lap 7 after his car’s undertray rubbed through the starter cable and “finally shorted the car out,” Bennett said.

Starting from 15th today, Bennett climbed through the field to secure his second spot on the podium.

“David’s car is really, really fast, and I didn’t want to cause problems; because, for my car, the track was way too slippery,” Bennett said. “So, I took my time getting through traffic. I settled down to a pace that wasn’t fast enough to gain anything on David.” 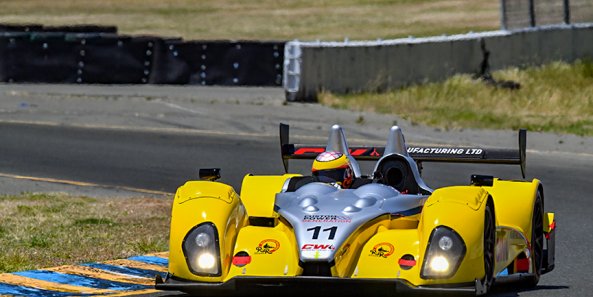