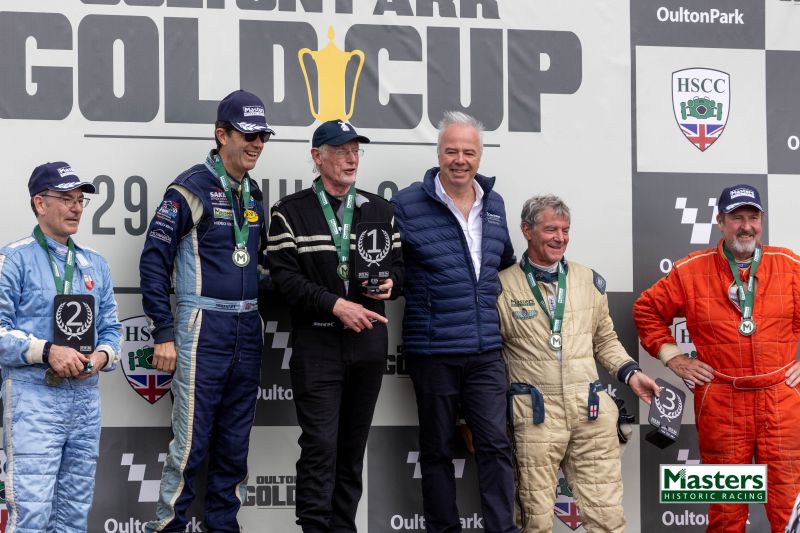 No-one else but the John Spiers/Nigel Greensall pairing was going to win the Cheshire Historic TT at the Gold Cup, as the duo romped home to a commanding victory in the 60-minute Masters Gentlemen Drivers race at Oulton Park. Starting from pole, Greensall drove a storming opening stint to hand his co-driver a 20-second lead over Mike Whitaker’s similar TVR Griffith. Spiers then proceeded to manage that all the way to the chequered flag.

Starting from the second row, Whitaker was soon up into second place, having dealt with the Robert Farrell/Dave Coyne Jaguar E-type started by Coyne that would soon drop away into early retirement. While Andy Willis in third overall did the early running in the CLP class, several of his CLP class rivals would pounce towards the end, Dan Eagling in the second part of the race lifting the Ginetta G4R started by Mark Halstead from sixth to third.

Giles Dawson’s Elan looked set to take fourth but he was robbed when he dropped out on the final lap, handing the place to Mark Shaw’s similar Elan. The Peter Thompson/Mark Hales Griffith grabbed fifth as the last of the unlapped runners. Still classified sixth, Dawson took third in the CLP class ahead of the Ron Maydon/Robin Ward Ginetta G4R and Stephan Joebstl in the Elan 26R started by Willis.

Overcoming their qualifying setback, Crispin Harris and James Wilmoth brought their dented and repaired Austin Healey 3000 home for a strong C2 class win, Harris having already leapt to the front on the opening laps. In the closing stages, the David Smithies/Chris Clarkson Healey stole second in class from the similarly equipped pairing of Mark Pangborn/Harvey Woods.

Following a rainy morning, with a slightly moist qualifying session, the sky was overcast above a drying track at Oulton Park when the Masters Gentlemen Drivers field was sent on its way for the Cheshire Historic TT at the Gold Cup. The John Spiers/Nigel Greensall and Robert Farrell/Dave Coyne pairings on the front row both elected to have their fastest drivers start the race, so Greensall led Coyne on the first lap, ahead of Whitaker and Andy Willis also as the quicker of the two starting the race in Stephan Joebstl’s Elan. Mike Whitaker was on a charge, though, as he soon passed Coyne to make it a TVR Griffith 1-2 at the top of the timing screens. Also on lap 2, Willis followed him past into third.

On lap 3, Greensall having made a break while the rest quarreled, Whitaker trailed the leader by seven laps, with Willis following two seconds down on the second TVR. Meanwhile, Peter Thompson had made it four TVRs in the top-three by also demoting Coyne’s E-type, as Giles Dawson in another was sixth in another Elan, heading Mark Halstead’s Ginetta G4R and Mark Shaw’s Elan. Jamie Boot was ninth in another Griffith, with Nick Matthews rounding out the top ten in another Elan 26R.

Further back, Crispin Harris had already fully negated the setback he and co-driver James Wilmoth had suffered in qualifying by storming their battered and fixed-up Austin Healey 3000 up to 14th and the C2 class lead ahead of Healey stablemates Mark Pangborn and Chris Clarkson. They were preceded by Mark Russell’s E-type, John Tordoff’s Elan and Ron Maydon’s Ginetta.

The field having settled down into a rhythm, Greensall put in a fastest lap of the race on lap 6, to increase his lead over Whitaker to 11 seconds. Willis followed three seconds further down the road, with Thompson, Dawson, Halstead, Shaw and Boot up next, as Coyne was seen entering the pits with an E-type that had already been dropping back steadily. A water leak was diagnosed after which the car was retired.

On lap 9, with some 20 minutes of the 60-minute race gone, Greensall went quicker than ever before and now had his lead up to 17 seconds. Whitaker had five seconds in hand over Willis, with Thompson, Dawson, Halstead and Shaw all evenly separated by some five to eight seconds. Boot, Matthews and Russell completed the top ten, the latter chased hard by Maydon and Tordoff in a three-car train. In C2, Harris still led Pangborn and Clarkson.

The pit window was just around the corner now, but the alarming news was that the leading TVR Griffith was seen leaking fuel. It soon proved false alarm, though. Halstead, Pearson and Tordoff were the first to come for their mandatory stop, the first two handing over to Dan Eagling and Callum Grant. On the next lap they were followed in by Thompson (handing over Mark Hales) and Russell. While Whitaker, Dawson, Shaw, Matthews and the three C2 runners pitted, Greensall and Willis carried on for just another lap to eek out every possible advantage of their pace. Along with Boot, they were the last to stop.

All the pitstops had panned out on lap 18, Spiers led Whitaker by 20 seconds, with Joebstl and Dawson in third and fourth, each split by some five seconds and setting similar lap times. In fifth, however, Dan Eagling was flying, his Ginetta lapping two seconds faster than the two Elans in front of him. Sixth – and fourth in the CLP class – was Shaw, and behind him a large 33-second gap had opened up to Hales and Boot in the other two Griffiths. Two more Elans – those of Matthews and Tordoff – were ninth and tenth respectively but caught at a rate by Robin Ward in Ron Maydon’s Ginetta. Now in 12th overall, James Wilmoth continued to lead C2 in the Healey started by Harris, with Woods and Smithies duelling two more places down, split as they Healeys were by Russell’s E-type and Callum Grant in the Marcos. Meanwhile, behind Smithies, George McDonald was rapidly catching everyone up to Ward in the Ginetta started by Adelman.

With 15 minutes remaining, Whitaker was lapping around a second quicker than Spiers, but with 18 seconds still in hand, the latter seemed on course for victory. Behind them, Dawson and Eagling had leapfrogged Joebstl to take over first and second in the CLP class, as the Austrian began losing pace. On lap 22, Shaw was past too, demoting Joebstl to sixth. Ahead of them, the fight for the CLP class lead was far from over, as Eagling had closed the gap to Dawson to a mere three seconds, and was lapping considerably faster.

On lap 25, Eagling was past and up into third and the CLP class lead, as Spiers continued to control his lead to Whitaker. In the last seven laps, this had been whittled down by just two more seconds. Meanwhile, at the back of the top ten, Ward had surged past Tordoff and Matthews to be ninth overall. In 14th overall, having been past by Russell and Grant, Wilmoth similarly managed a class lead of 27 seconds, while behind him, Clarkson had relieved Woods of second place on class.

As the clock ticked down to zero, Spiers had 14 seconds in hand over Whitaker to finish off a commanding race for himself and Nigel Greensall. Eagling took third and the CLP class win, while on the penultimate lap Dawson lost fourth – and second in class – to Shaw, as Dawson limped into the pits on the final lap, also handing fifth to Hales. Dawson still hung on to sixth as the first of the lapped runners, ahead of Boot, Ward, Joebstl and Matthews, while Wilmoth completed a dominant C2 class run with a win for himself and Crispin Harris. 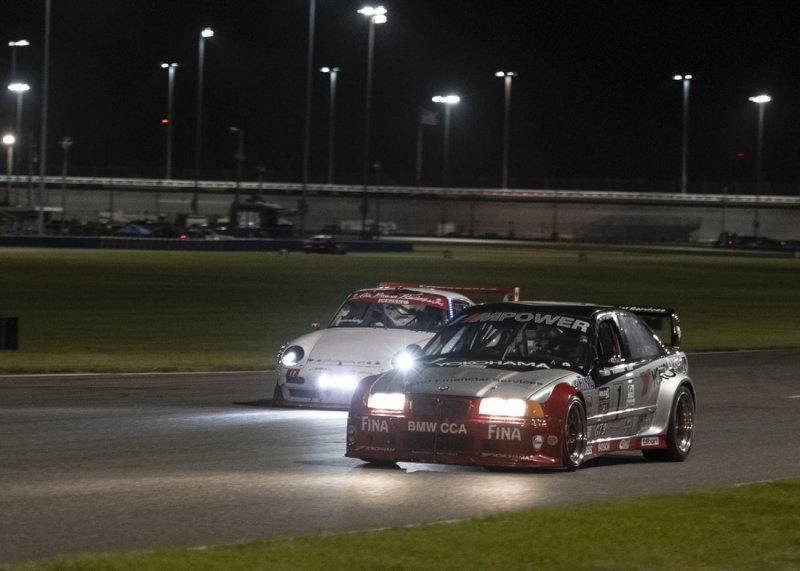 Before the rain began....