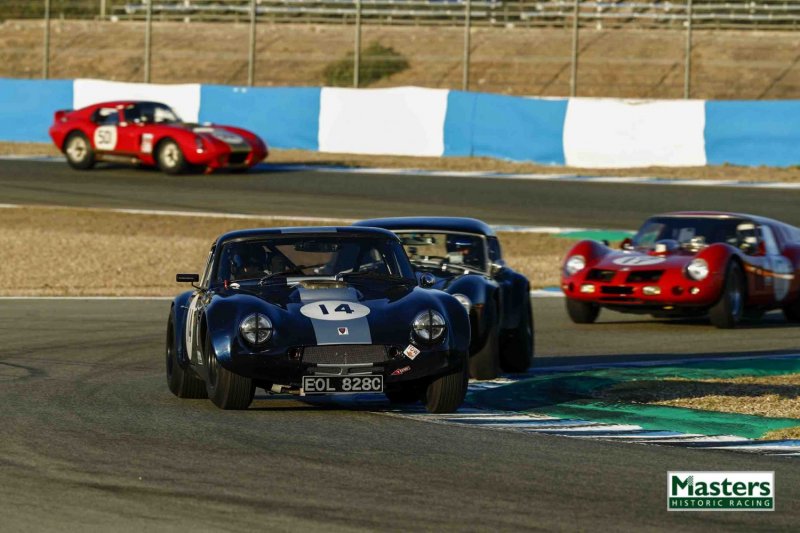 In a 90-minute race that to the end remained finely poised between the three front-running cars, the John Spiers/Nigel Greensall TVR Griffith came out on top as Greensall swept past the Elans of Graham Wilson/David Pittard and Andrew Haddon in the final seven minutes of the race. On lap 35, Haddon himself was caught by Pittard but the Elans then saw Greensall charge past the both of them.

It wasn’t all plain sailing for the winners, though. With Spiers coming in for his stop five seconds before the pit window opened, Greensall was forced to do a drive-through next time around, handing him an additional challenge to overcome.

“I’m delighted”, said Greensall. “I’ve just started racing with John, and this was my first proper race in the TVR. John did a great first stint, but the pitstop came just five seconds too soon, so I was basically forced to drive flat-out for 50 minutes! I managed to get both Elans on the same lap, Andrew into turn 1 and then David on the back straight. I’m absolutely thrilled – first time at Jerez, and wins in all the big cars, Cobras, E-types and now the Griffith.”

Haddon had held the advantage in the first part of the race, as he challenged Michael Gans in the Shelby Cobra Daytona Coupé for the lead to take over the helm on lap 9 before the big American car was forced to retire with an engine issue. Two early safety-car periods helped Spiers and Wilson to keep the lead in sight, allowing their relief drivers to ‘only’ have to close gaps of well less than a minute, which both duly did.

“It was good”, said Wilson. “The safety cars helped us, I must say. I was amazed how many cars were off in the gravel!”

“The safety cars got me!” said Haddon. “I lost my lead every time. But hey, I got beaten by two worthy pros, so all good. It was good fun and the car was great.”

C2 class honours went to Chris Clarkson/David Smithies after a race-long fight with the similar Austin Healey 3000 of Harvey Woods/Mark Pangborn. Woods had led the first part but Smithies came back to take the lead in the second part of the race. Overcoming several issues, the Thomas Henkel/Karl Günter Diederichs Porsche 904 cornered the C1 class win.

Dawn had only just broken when the cars got underway for their 90 minutes of racing in the fresh air of an Andalusian morning in autumn. Spiers and Gans led away, with the latter soon taking over the helm. The man on the move was Andrew Haddon, passing Wilson, Mowle and then Spiers to be second after the opening lap. Behind the TVR of Spiers and Mowle’s E-type, Peter Dod was up next in the second Griffith, chased by Richard Hywel-Evans in the Cobra, Lukas Halusa in the Ferrari 250 GT ‘Breadvan’, while Ron Maydon’s Ginetta G4R had passed Graham Wilson’s Elan for second in the CLP class. In tenth, Steve Soper driving solo in Mark Martin’s Lotus Cortina had made up a wealth of places to easily lead the one-hour touring-car race-within-a-race.

At the front, Haddon’s Elan kept Gans in the big Shelby Cobra Daytona Coupé honest, as the two broke away from Spiers by three seconds. Dod was up into fourth ahead of Hywel Evans’s AC Cobra, both having passed Mowle, but on lap 2, Dod dropped away to allow Hywel Evans into fourth. Meanwhile, Alex Birkenstock’s Porsche 904 was into the pits with damage.

After four laps, Gans and Haddon were still tied together by a string, having left Spiers behind seven seconds. Haddon was the convincing CLP-class leader ahead of Maydon in seventh overall and Wilson in ninth, while Harvey Woods kept Chris Clarkson behind in the intra-Austin Healey 3000 battle for C2 class honours. With Birkenstock in the pits, Thomas Henkel’s other 904 had an easy time of it in C1, now in 15th overall.

On lap 5, the safety car was called to recover the stricken TVR of Peter Dod, so the field was bunched up, allowing fresh overtaking opportunities to those left behind. Green-flag conditions returned on lap 7, and soon enough Gans and Haddon left the competition trailing once again, as the order behind remained mostly unchanged for the moment: Spiers, Hywel Evans, Halusa and Maydon, with only Mowle dropping down to seventh ahead of Soper, Wilson, and Peter Thompson in the Marcos 1800 GT. Meanwhile, the Christian & Wolfgang Molitor Lotus Elan 26R became the race’s next retirement.

One lap later, Haddon had done it, passing Gans for the lead into the final corner and then using the twisty bits to eek out a 1.7-second lead halfway into lap 10. Further back, the A-class Lotus pair of Guy Peeters and Guillaume Peeters – Guy in a 15, Guillaume in an 11 – pushed Thompson off the top-ten leaderboard. Soon, Haddon was all on his own, as Gans was seen limping into the pits. With one hour remaining on the clock, this left Haddon with a 15-second lead over Spiers, who was chased hard by Hywel Evans, Halusa, Maydon and Mowle, the five all bunched together.

On lap 12, the order among the pursuing group changed around, as Halusa leapt ahead to claim second place, with Hywel Evans also snatching third from Spiers. Soper’s Cortina trailed Mowle by five seconds, with another gap opening up to Wilson and the Belgian pair of open-top Lotus machines. In 15th overall, Woods was four seconds clear of C2 class rival Clarkson while C1 class leader Henkel was 12th overall – but only until the moment the German’s Porsche 904 hit the gravel. So on lap 13, the safety car re-emerged to allow the beached Porsche to be retrieved, and again the leader’s advantage was slashed. The touring-car pit window now open, Soper took the opportunity to come in and hand over to Mark Martin who had originally been scheduled to take over from Gans.

The green flag was waved at the start of lap 16, just as the Gent Drivers pit window was about to open. Spiers was quick to come in and hand over Nigel Greensall – but too quick, as the window would only open five seconds later, forcing Greensall to do a drive-through next time around. The Charles Allison/Peter Thompson Marcos 1800 GT was in the pits too but for a different reason – its Volvo engine overheating after a blown head gasket. Next time around, Maydon and Wilson were in too, handing over to Robin Ward and David Pittard respectively, while at the start of lap 18, Halusa, Hywel Evans, Mowle, the two Peeters, Steve Jones and Stephan Joebstl in the Elans, and Clarkson were all in at the same time, the leader coming in on lap 19. Phil Keen was now in Mowle’s Jag, the Peeters were relieved by Louis Zurstrassen in the 11 and Frédéric de Braey in the 15, with Chris Atkinson taking over from Jones, and Andy Willis from Joebstl. Woods, meanwhile, had handed over to Mark Pangborn.

The overall lead had now gone to Mark Martin in the Cortina, with Haddon up next, but he was being caught by Keen and Pittard, who had already jumped Hywel Evans and Ward, while Greensall in Spiers’ TVR and Willis in Joebstl’s Elan were rapidly catching up as well – Greensall now the fastest man on track. In C2, Smithies in the Big Healey started by Clarkson had passed Pangborn for the class lead, and now led his rival by three seconds.

With many of the quicker drivers now in the cars, the race towards the chequered flag was on. The Steve Soper/Mark Martin Cortina took that first, after an hour of racing, to win the Masters Pre-66 Touring car section from Rick Carlino in the Mini, the American in 17th overall when the touring-car race ended. Sadly, the race had ended for Halusa too, the Austrian retiring his Breadvan with a fuel-pump issue.

While Haddon was setting lap times similar to Keen, Pittard was absolutely flying. On lap 22, the youngster passed Keen to set after the Elan in the lead, still 13 seconds away but losing one to two seconds a lap. Meanwhile, Greensall had also passed Hywel Evans and Ward, the latter for the moment holding Willis at a safe distance. Atkinson’s Elan was up next, now 15 seconds further up the road from the Cliff Gray/Stephen Bond Elan that had broken into the top-ten. As the two Belgian Lotus cars lost ground, Smithies and Pangborn moved up into tenth and 11th overall.

On lap 27, with less than 25 minutes to go, Haddon still held a 7-second lead over Pittard, with Keen a further ten ticks behind. Greensall in turn was closing on Keen while 30 seconds further back Hywel Evans was pushed by Ward to defend his fifth place hard. Willis was eighth, 20 seconds down on Ward but with a massive 40 seconds in hand on Atkinson. Bond’s Elan was the first lapped car in ninth while Smithies still held off Pangborn for the lead in C2. In 15th overall, the Jim Chapman/Tim Kary Healey held third in the C2 class.

Two laps later, Greensall made Spiers’ Griffith the lead C3 car again as he stormed past Keen in the E-type to move into third, while Haddon was now in visual range of Pittard. The race was now as finely poised as ever, since with 15 minutes remaining, Pittard looked set to swamp Haddon but Greensall – now only 10 seconds away from the pair of Elans – was lapping faster than either of them, on occasion at the rate of two seconds per lap. Keen trailed the leader by 20 seconds and looked unable to pounce while Ward had finally made it past Hywel Evans to take fifth overall.

Haddon made Pittard work hard for it, staying in front by a whisker on both lap 33 and 34, while Greensall closed to three seconds with less than ten minutes remaining, but on lap 35, Pittard was into the lead. Straight after, Haddon also had Greensall to deal with, the Griffith having now slashed the last bit of breather for both Elans. And then, almost in one sweep, Greensall stormed into the lead as he left Pittard and Haddon trailing. Meanwhile, Willis took sixth away from Hywel Evans.

At the line, Greensall led home Pittard by four seconds and Haddon by six, with Keen a further 18 seconds in arrears. Behind the two Elans, Ward secured third in the CLP class, ahead of Willis, while Hywel Evans arrived home in seventh overall and third of the big-capacity cars. The Elans of Atkinson and Bond were up next, while Smithies rounded out the top-ten as he took C2 class honours from the Woods/Pangborn car. Jeremy Cooke’s Shelby Mustang GT350 took 12th ahead of the two Belgian Lotuses and the Chapman/Kary Healey. Having got going again, the Thomas Henkel/Karl Günter Diederichs Porsche 904 bagged the C1 class win while Hans Jörg Haussener’s B1-class Alfa Giulietta SV was the last car to see the chequered flag. 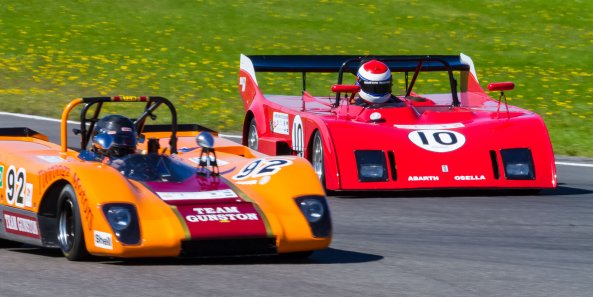