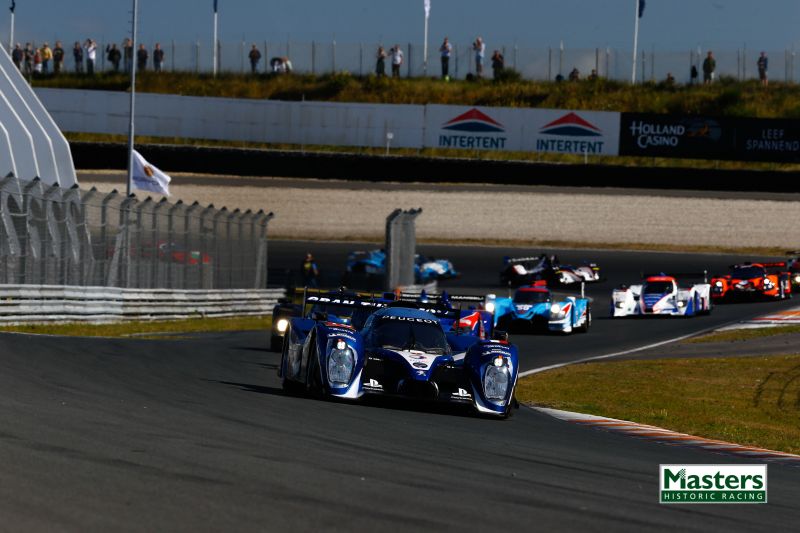 Steve Tandy drove to a commanding victory in the first Masters Endurance Legends race at Zandvoort’s Historic Grand Prix, as he powered his Peugeot 90X from pole to the chequered flag in a race that finished behind the safety car. During his opening stint, young Spaniard Pepe Martí was second in his P3-class-winning Norma M30 before Keith Frieser’s Zytek 09S pipped him at the stops. After the race, however, Frieser was amongst those penalised for overtaking under the safety car. As a result, the Canadian dropped down to sixth place while handing Martí back second place.

“It was very straightforward”, said Tandy. “I had a good clean start, got a good gap to everyone, and after that I was just pacing myself.”

In third overall, Marco Werner overcame an early incident with Martí to recover to the P2 class win in his Lola-Lotus B12/80, as the German was followed home by the class-rivalling David Brise/Alan Purbrick Lola B09/80. Andy Willis and Stephan Joebstl took second in the P3 class while finishing fifth overall. Third in the P3 class, Craig Davies and Ron Maydon ended up seventh in another Ligier JSP3.

“At the start, I had an unfortunate contact with Marco”, said Martí, “but after that, I had a good race, and tried to make as few mistakes as possible. But in a P3 car it’s hard to keep up with the Peugeot!”

Taking eighth overall in their Ferrari 458 GT3, Michael Lyons and Christopher Stahl led all the way in GTs, while Scooter Gabel in the BMW M3 GTR took second in class after Jason Wright in another Ferrari 458 GT3 was hit by a stop-and-go penalty.

“It was really great to be back in the 458 here”, said Lyons. “Last time I raced one of these was in 2011! It was great to race with Chris, and it was fun battling with the prototypes – I had the best seat in the house!”

“The BMW is such fun, I love that car!”, said Scooter Gabel about bringing the 1997 car over to Europe for several events, “and for its age it’s quick, but not enough to be competitive here. It was great to come to these tracks – especially here, this is a really wild track! Sadly, this is the last European event that I’m doing, but I’m thinking of leaving it here and doing some more races next year.”

A bright and sunny Saturday morning in the dunes greeted the Le Mans prototypes and GTs on the Masters Endurance Legends grid headed by Steve Tandy’s pole-sitting Peugeot 90X. Tandy duly led away, while Joshua Kreuger started the GT1 Viper GTS-R – much plagued during both qualifying sessions – from the pitlane. On the opening lap, Tandy was initially chased by Pepe Martí, but soon opened up 1.5 second gap, with Frieser in third, five seconds down. David Brise was a fast-starting fourth in the Lola B09/80, followed by Andy Willis who was equally quick out of the blocks in the first of the Ligier JSP3s. In seventh, Michael Lyons led the GTs in the Ferrari 458 GT3. Marco Werner, however, had dropped outside the top-ten after contact with Martí.

On lap 2, a superquick lap by Tandy got him out to a six-second lead over Martí in the Norma M30, with Frieser and Brise holding station while Stuart Wiltshire in the P2 Ligier was back up to fifth ahead of Lyons and Willis. Meanwhile, Marco Werner was climbing up the order and was now eighth in the Lola-Lotus B12/80, ahead of Craig Davies in the Ligier JSP3 shared with Ron Maydon, with Jason Wright rounding out the top-ten ahead of Neil Glover in the third P3 Ligier and Scooter Gabel’s 1997 IMSA BMW M3 – the oldest car in the field by far. Wright, however, was looking at a stop-and-go penalty for overtaking Rick Carlino’s ORECA LMPC10 under yellow.

Four laps into the race, Martí began to close on Tandy again, while 12 seconds down on the leader Frieser and Brise fought over third place. Wiltshire was a further four seconds adrift and held a similar gap over Lyons, with Werner into seventh and setting the same lap times as the two leaders.

By lap 7, Tandy’s lead was up six seconds as the backmarkers came into play, while Frieser in the P1 Zytek 09S and Brise in the P2 Lola B09/80 continued to war over third overall, with Werner having recovered to fifth and closing in on the pair of them. The pit window was approaching now, and while Wright took his penalty to drop down to 15th overall, Tandy continued to lead Martí by four seconds, now nine laps into the race.

On lap 10, Werner was the first one to in for his mandatory stop while a slower lap from Tandy allowed Martí to close to within 1.5 seconds. Behind them, Frieser had broken away from Brise by three seconds, and were up into second and third as Martí pitted on the lap after. Meanwhile, in sixth, Michael Lyons had inched up to Wiltshire to snatch fifth from the Ligier JSP2 just before handing over to Christopher Stahl.

Tandy, Frieser and Brise all kept going into lap 12, as Neil Glover came in to hand the Ligier JSP3 over to Jason Green. Further back, Scooter Gabel was now second in GTs, ahead of Wright and the recovering Kreuger, who was three laps down. Brise was in on the next lap to swap places with Alan Purbrick, with Wiltshire also in, as they were joined by Bob Blain’s HPD-Honda ARX-03b, Mike Furness in the Courage LC75 and Chris Atkinson in the Pilbeam MP91.

Tandy and Frieser were both in from their top positions on lap 14, along with Andy Willis who would hand over to Stephan Joebstl while Ron Maydon took over from Craig Davies in the two Ligier P3s. As the pit window closed, Tandy now led Frieser by 15 seconds, the Canadian having Martí breath down his neck. Werner was up into fourth, 16 seconds down on the Spanish youngster. Purbrick was fifth, 41 seconds down on the leader, with Joebstl in sixth, 50 seconds down. Stahl continued to lead in GTs with the Ferrari 458 GT3, now in seventh overall, but Wiltshire was homing in on the German. Maydon was ninth, with Gabel rounding out the top-ten as the second car in the GT class. Further back, Blain retired the HPD, the American still suffering from a sore neck.

On lap 16, though, the safety car was out to bunch up the field, as Mike Furness’ Courage LC75 and Jason Green’s Ligier JSP3 came to a halt out on the track almost simultaneously, Green spinning out of Tarzan corner, Furness getting into trouble in the Hugenholtzbocht. Four lapped cars – those of Stahl, Wiltshire, Bakker (in the Viper started by Kreuger) and Wright – still separated Tandy from his pursuers, though. Meanwhile, word came through that Frieser, Stahl and Gabel were hit with a five-second time penalty for crossing the white line on pit exit.

But would there be a restart? There wouldn’t – Tandy received the chequered flag under yellows, to win from Frieser, Martí and Werner. Martí won the P3 class from the Willis/Joebstl and Davies/Maydon Ligiers, while Werner proved victorious in P2, leading home the Brise/Purbrick Lola and Wiltshire’s Ligier. Michael Lyons and Christopher Stahl won in GTs, ahead of Gabel and Wright. 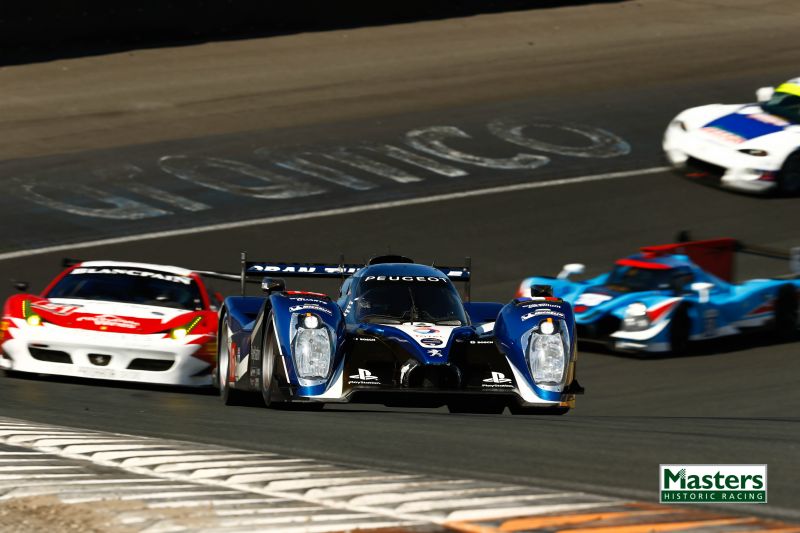 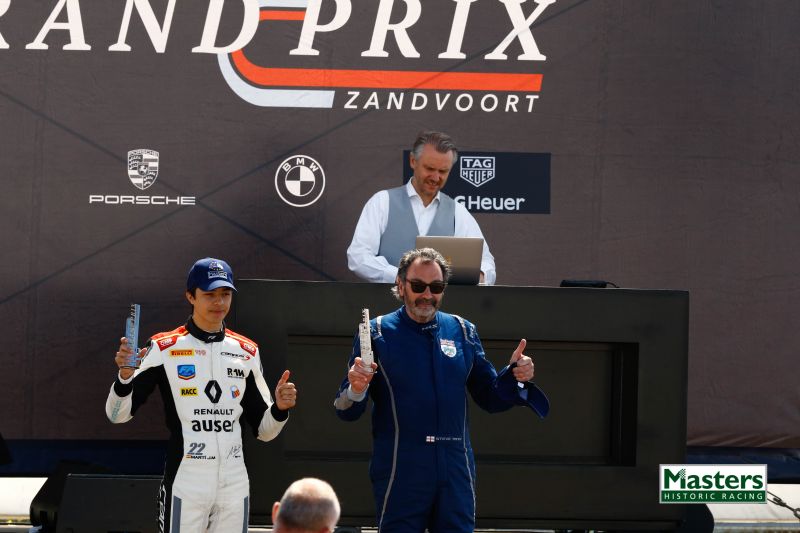 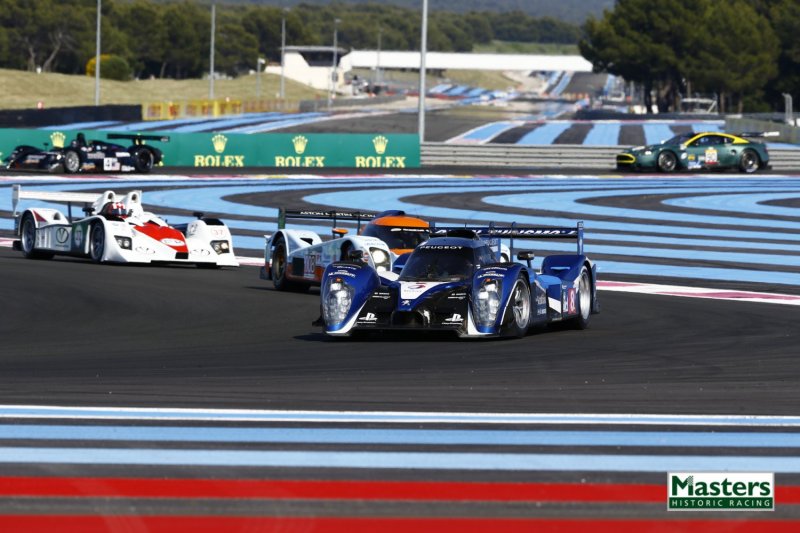