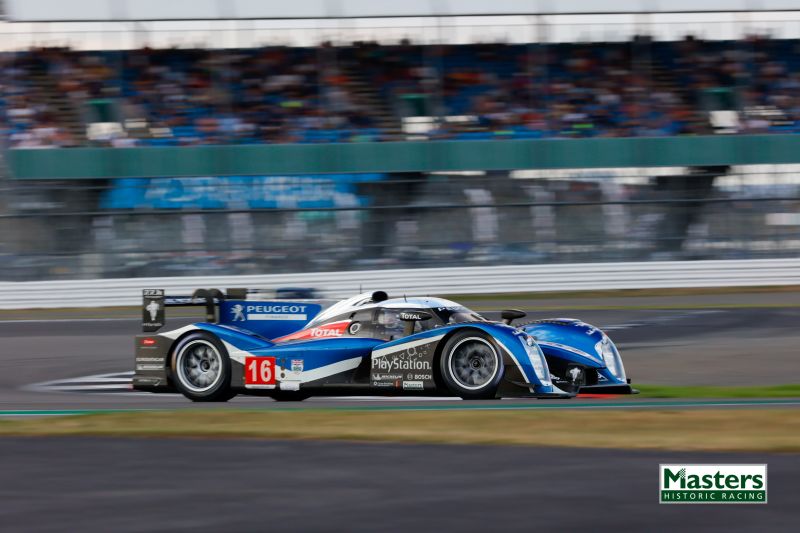 Steve Tandy seemed to have romped to a clear victory in the first of two Masters Endurance Legends races of the Classic weekend at Silverstone but when the dust had settled a time penalty for a yellow-flag infringement cost the Peugeot 90X driver 31 seconds and the win. As a result, the spoils went to Jamie Constable whose Pescarolo 01 had finished in second place.


From the start, the pole-sitting Tandy faced a strong challenge from Timothy De Silva in the Pescarolo 01, the American taking the lead on lap 2 to race out to a six-second lead at the stops. Soon after, though, Harindra De Silva was seen grinding to a halt in the Pesca.


“It was a tricky race”, Tandy commented before he was told that he had lost the win. “I knew Tim would be coming for me, so I let him go, knowing the driver change was coming up.”


Behind Tandy, Jamie Constable came through to claim second on the road in the other Gulf-liveried Pescarolo before he was handed the win, while Michael Lyons overcame an elite-driver pitstop time penalty and an unscheduled stop to grab third and the P2 class win in his Lola-Mazda B12/80. Fourth and fifth were Keith Frieser in the Zytek 09S and Kriton Lendoudis in the second Peugeot 90X, while in sixth overall, Stuart Wiltshire took second in P2 with his Ligier JSP2. Behind Christophe d’Ansembourg’s Lola-Aston Martin DBR1-2, Mike Newton came third in the P2 class with his MG-Lola EX257.


“I’m very happy”, said Constable after having crashed the car in qualifying. “The team built the car back up this morning, I didn’t even know we were going to be in the race!”


“We first drove it on Tuesday!” said Lyons about the car that has only been with the team for 14 weeks. “So the team put in a great effort – all credit to them!”


The P3 class battle came to a dramatic end when Rob Hall’s Ligier JSP3 failed on the final lap, handing the win to the similar Marcus Jewell/Ben Clucas-pedalled machine. Hall was still classified second in class ahead of the Ron Maydon/Craig Davies JSP3. In GTs, Andie Stokoe and David McDonald completed a dominant run in their Ferrari 458 GT3, with Niko Ditting coming in second in his GT1 Aston Martin DBR9 and Colin Sowter taking third in another 458 GT3.


Some thirty prototypes and GTs lined up for the first of two 40-minute Masters Endurance Legends races at the Classic, with Steve Tandy leading away in his Peugeot 90X. Timothy De Silva in the first of the Pescas was next, harried by Michael Lyons in the leading P2 car, who himself was chased by class rival Stuart Wiltshire, but Kriton Lendoudis in the second Peugeot was soon up into fourth. D’Ansembourg had passed Wrigley for fifth, the Lola-Aston DBR1-2 getting in front of the Mazda-engined Lola B07/46. In GTs, Andie Stokoe’s Ferrari 458 GT3 led Angus Fender’s Dodge Viper, with Michael McInerney’s Mosler MT900R in third.


At the front, Tandy wasn’t getting away from De Silva – in fact, the American dove past into Brooklands to take the lead on lap 2. Lyons in the other Mazda-powered P2 car tried to stay with the two P1 cars in front, the young Briton having Lendoudis in fourth well covered. Behind the Greek, d’Ansembourg had taken Wiltshire for fifth overall. Keith Frieser’s P1 Zytek 09S was next, followed by Wrigley’s Lola and Mike Newton MG-Lola EX257. In 11th overall, Rob Hall led the P3 class in his Ligier JSP3, as the Hall & Hall boss held off his employee Andy Willis in the team’s second JSP3 shared with Stephan Joebstl. Meanwhile, among the GTs, McInerney’s race in the Mosler was done, handing third in class to Wayne Marrs in another Dodge Viper.


After four laps, De Silva and Tandy continued to run nose-to-tail, the two having dropped Lyons to the tune of six seconds. The Lola B12/80 had the same amount of ticks in hand on Lendoudis, as he continued to lead the P2 class, while Jamie Constable had come through into fifth place with his Pescarolo-Judd 01, having vaulted d’Ansembourg, Frieser and Wiltshire, the latter now also passed by the Canadian in the ex-Beechdean Mansell Zytek. Behind Mike Newton in ninth, David Brise had recovered his P2 Lola B09/80 from its lowly starting position to be tenth overall ahead of the P3 fight between Hall and Willis. Stokoe continued to lead the GTs, now in 20th overall, with Marrs 20 seconds down in second, as Fender had come in with trouble. Now, Niko Ditting was third in class with the GT1 Aston Martin DBR9.


After 8 laps, De Silva had created a 5.8-second gap to Tandy, with Lyons seven more seconds adrift. Constable was now fourth, at the cost of Lendoudis, but already 33 seconds down on the race leader. Frieser had got on top of d’Ansembourg to gain sixth, while Wiltshire, Brise and Newton, as Mike Wrigley’s Lola B07/46 had dropped away to 29th, after three pitstops in quick succession.


On the cusp of the pitstops, De Silva and Newton were among the first in, soon followed by Constable, Hall and GT leader Stokoe, the latter handing over to David McDonald. On lap 11, Tandy was in too, just as Lyons, Frieser, and Brise switching places with David Purbrick. On the next lap, Lendoudis and d’Ansembourg were the last ones to stop. But dramatically so, Harindra De Silva in the Pescarolo that had led most of the race so far, ground to a halt on lap 13.


As a result, Tandy led Constable by 28 seconds after the stops, but Lyons was coming back fast after his 15-second elite driver penalty, the P2 Lola right on the back of the P1 Pesca. Twenty seconds further back, Frieser was fourth, with Lendoudis and Wiltshire in close company. D’Ansembourg was seventh, ahead of Rob Hall who now consummately led the P3 class. Further back, Ben Clucas in the JSP3 started by Marcus Jewell looked set to usurp Stephan Joebstl for second in class – and it was done automatically when Joebstl spun. McDonald continued to lead the GTs in the all-black Ferrari 458 GT3, with Ditting’s DBR9 11 seconds behind. Colin Sowter had moved into third in another 458 GT3 but was fighting hard with Wayne Marrs in the Viper – but sadly, the Viper was out on lap 16 with a smoking engine.


With five minutes remaining, Tandy’s lead over Constable remained 23 seconds, but Lyons was in trouble, coming in for another stop to drop behind Frieser, with Lendoudis now aiming to prise fourth place away from him too. Just five seconds further down the road, Wiltshire was looking to pounce as well, and that was for the P2 class win. But whatever had plagued Lyons was gone now, and the Lola B12/80 was back up to its usual pace.


At the front, Tandy eased off to win by 11 seconds from Constable, while Lyons pipped Frieser on the final lap to take third overall next to his P2 class win. Lendoudis was fifth ahead of P2’s second-placed man Stuart Wiltshire in the Ligier JSP2, d’Ansembourg, Newton and the Brise/Purbrick Lola. In another twist to this race, Rob Hall’s Ligier JSP3 broke down on the final lap, handing the class win to the rival Jewell/Clucas JSP3 that ended up in tenth overall. Hall still bagged second in class, ahead of Ron Maydon and Craig Davies in another JSP3. In 14th overall, Andie Stokoe and David McDonald grabbed a largely unchallenged GT win from Ditting and Sowter.


The sting was in the tail, though, as hours after the race Tandy was handed a 31-second time penalty for a yellow-flag infringement, which dropped him well behind Constable in the final result. Although the Peugeot driver kept second place, Constable in the Pescarolo was declared the winner. 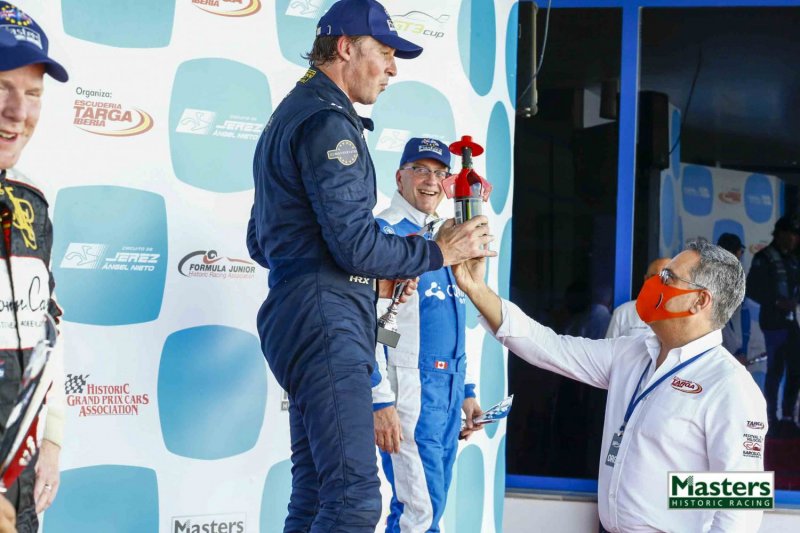 D’Ansembourg doubles up in Masters Endurance Legends fiesta at Jerez