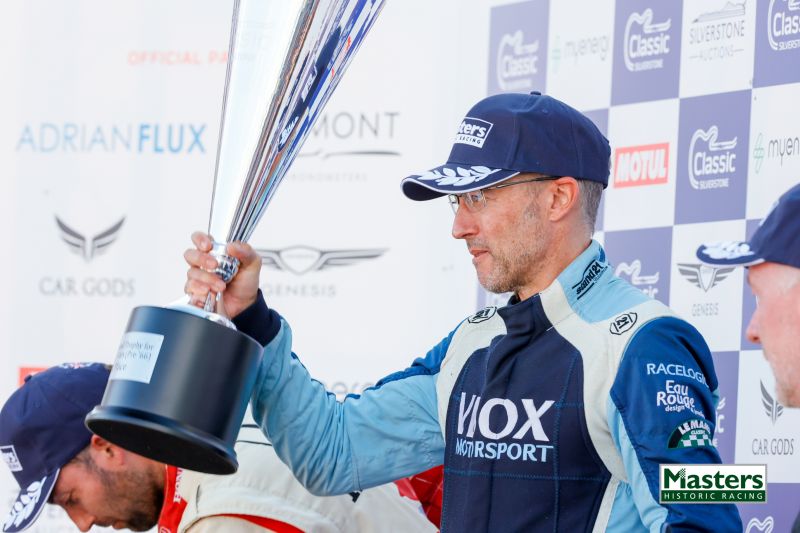 Julian Thomas and Calum Lockie overcame Lockie’s elite-driver time penalty at the mandatory pitstops to win the International Trophy for Classic Pre-66 GT Cars – the eighth round of this season’s Masters Gentlemen Drivers series. Thomas handed Lockie a 13-second lead at the stops, but with his penalty, Lockie had to fight his way back past the TVR Griffiths of John Spiers and Mike Whitaker, before also passing John Davison’s Griffith and James Dodd’s E-type on the penultimate lap.


“I had a great time fighting the TVRs at the start”, said Thomas, “but the Daytona Cobra has more traction out of the corners because of the longer wheelbase.”


In his opening stint, Thomas had been chased by Davison and Whitaker all the way, soon joined by Ollie Hancock in John Spiers’ Griffith but at the pitstops all would be vaulted by Dodd, who continued to lead until he was forced to succumb to Lockie’s stunning comeback drive.


“Not really, no”, said Dodd about his chances to hold off Lockie for the win. “After he passed, I tried to stay with him, but he was just too quick.”


“I had a lot of fun with Julian at the beginning”, said Davison. “But as he said, the cars are very different in handling, and in the end I had to let him go.”


In ninth overall, Andrew Haddon completed a truly dominant drive to the CLP class win in his Lotus Elan, while the Mark Halstead/Dan Eagling Ginetta G4R proved victorious in an exciting fight for second in class with Nick & Eddie Powell’s Elan, Eagling passing Eddie Powell right at the end. In C2, Mark Holme led from start to finish in his Austin Healey 3000, while in C1, Neil Fisher’s MGB trailed Oli Webb’s Porsche 911 during his opening stint but jumped Webb’s teammate Guy Ziser at the stops to claim the class win.


A capacity grid of no less than 65 cars rolled out for the International Trophy for Classic Pre-66 GT Cars, a sight awesome to behold. Already the eighth of a busy ten-round Masters Gentlemen Drivers schedule, this relatively short 50-minute race got going with Julian Thomas hoping to storm off into the lead from the dominant pole position that he conquered in qualifying – but the Shelby Cobra Daytona Coupé was jumped by John Davison’s TVR Griffith, with Mike Whitaker’s Griffith in third.


Two laps gone, and Davison stuck to his guns, but Thomas put all sorts of pressure on him. James Dodd had put his E-type up into fourth, followed by Chris Ward’s similar car, with John Pearson’s holding sixth in another E-type. Next up were the two Daytona Coupés of Roy Alderslade and Patrick Shovlin. Andy Wolfe’s AC Cobra and Jason Minshaw’s E-type completed the initial top ten.


As Thomas finally made it past into the lead, Andrew Haddon had jumped Mark Halstead for the CLP class lead, the Lotus Elan in 11th overall ahead of James Thorpe’s E-type and Halstead’s Ginetta G4R. In C2, Mark Holme led Doug Muirhead while in 35th overall in his Austin Healey 3000, In 45th overall, Oli Webb led the C1 class in the Porsche 911 shared with Guy Ziser. Meanwhile, the James Claridge/Gonçalo Gomes Lotus Elan 26R pulled off.


Ten minutes into the race, Thomas, Davison and Whitaker were still tied to a string, just two seconds between them, with Dodd and Ward also holding on to the lead group. John Pearson followed three seconds behind Ward, but on lap 4, Ollie Hancock starting John Spiers’ Griffith was past into sixth while Shovlin was into the pits with his Daytona Cobra.


On lap 5, though, Thomas had managed to make a break, now leading the two Griffiths by some five seconds. Dodd and Ward hung on, with Hancock closing in on them, but behind him Roy Alderslade had taken Pearson for seventh. Further back, Haddon was into the overall top ten with his CLP-class-leading Elan, while in 15th overall, Giles Dawson’s Elan had moved into second place in class, ahead of Scott Mansell’s similar machine. In 33rd overall, Mark Holme still led Muirhead in C2, while Oli Webb was well ahead of Neil Fisher’s MGB in C1.


As the pit window approached, Thomas’ lead had increased to nine seconds, with the chasing TVRs still nose-to-tail. In fact, Ollie Hancock had made it three chasing Griffiths, having passed both Dodd and Ward. Further back, Jason Minshaw nicked eighth from John Pearson, switching their E-types around. Meanwhile, Andy Wolfe had dropped out of the top ten – and the entire race – with a gearbox issue on his AC Cobra. Stephen Bond’s Elan was another retirement, having fallen victim of clutch issues. C1 contender Andrew Walton was meatballed for a mechanical issue on his Porsche 911.


Nick Powell and Mark Halstead were the first of the pitters, handing their respective Elan and Ginetta to their quicker teammates Eddie Powell and Dan Eagling, the latter having stuck the G4R fourth overall on the grid on Friday. At the front, though, Thomas continued unperturbed, now leading Davison by 13 seconds, but with the elite-driver pitstop penalty for teammate Calum Lockie still awaiting them, as Davison and Whitaker were in next, followed by James Dodd. Then, on lap 11, Thomas was in for the driver change with Lockie, along with Hancock coming in for Spiers.


After the pitstops had panned out, Davison, Whitaker and Spiers had all vaulted Lockie, as was expected, while Minshaw and Haddon were among the last ones in, with Chris Ward the very last one to do so. The three Griffiths were going at it hammer and tongs, however, Dodd had jumped all of them at the stops and was now in the lead!


So with 14 minutes still to go, Dodd led the three TVRs, three seconds in hand over Davison who continued to be chased by Whitaker, as he had been all race, with Spiers slowly falling into Lockie’s clutches. Richard Kent in the E-type started by Ward was sixth, ten seconds down, with Gary Pearson up next, followed by CLP class leader Haddon, Alderslade and Phil Quaife in the E-type shared with James Thorpe. In 12th, Dawson was still second in CLP, with Eddie Powell moving up into third, in 16th overall. Mark Holme continued his dominance of C2, with Nils-Fredrik Nyblaeus now in the chasing Austin Healey 3000. In C1, because of Oli Webb’s elite-driver pitstop penalty, Guy Ziser had been vaulted by Neil Fisher’s MGB.


At the front, Dodd’s lead was crumbling, Davison now just 1.3 seconds behind, while Lockie had already dealt with Spiers and Whitaker, with seven minutes remaining. On lap 18, Lockie moved into second and set off after Dodd in the lead, who now was just yards further up the road – and in fact, on the same lap, the Scot pulled it off into Copse when Dodd found himself blocked by two backmarkers. Further back, the fight for second place in the CLP class had hotted up to tropical temperatures, with Shaun Balfe’s Elan, Eddie Powell in another Elan and the fast-approaching Dan Eagling in the Ginetta all disputing 13th overall.


So as the race came to a close, Lockie took home a hard-fought win for himself and Thomas, as Dodd continued to chase the Daytona Cobra to the line, having dropped the Griffiths of Davison, Whitaker and Spiers. A long way back, Kent took sixth from Gary Pearson and Phil Quaife.


In ninth overall, Andrew Haddon bagged a comfortable CLP class win, while in 13th overall, Dan Eagling came through to claim second in class in the Ginetta G4R, passing Eddie Powell right at the end. In 27th overall, Mark Holme completed his dominant run in C2, while in 38th overall, Neil Fisher managed to keep Guy Ziser at bay for the C1 class win. 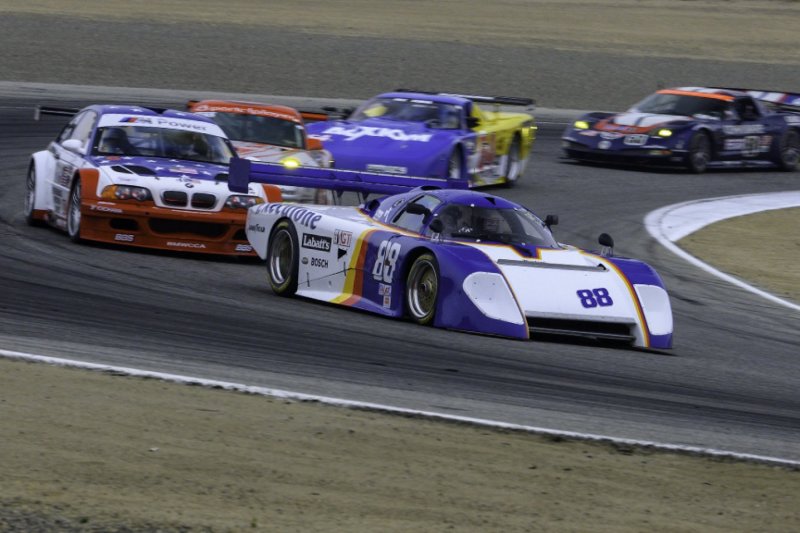