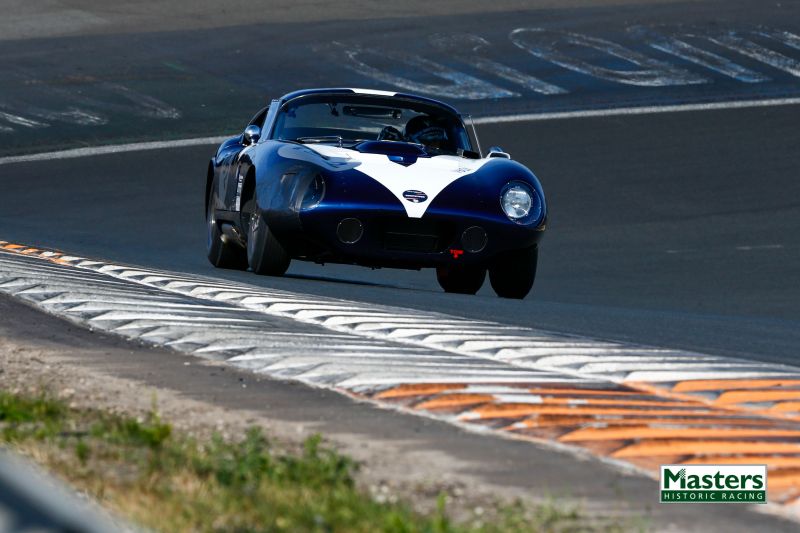 Julian Thomas and Calum Lockie (Shelby Cobra Daytona Coupé) fought off the opposition by winning Zandvoort’s 90-minute Masters Gentlemen Drivers race by well over a lap. For once, Lockie started the race to pull out a massive lead over his rivals, with Thomas extending the gap even further. The local crews of Bernhard van Oranje/Tom Coronel (in another Daytona Cobra) and David & Olivier Hart (Bizzarrini 5300 GT) came home a distant second and third, Hart Sr having been delayed by a slow puncture.

“The car was fantastic all race”, said Thomas. “And I couldn’t slow down too much, otherwise I’d lose my concentration!”

“Yes, the car was absolutely wonderful”, Lockie agreed. “We stroked it, focused on keeping it nice and tidy. I love this place, just fantastic, and great to see everyone so enthusiastic!”

The John Spiers/Nigel Greensall TVR Griffith also challenged for second place before Greensall was forced to retire the car at two-thirds’ distance. Meanwhile, the CLP class fight heated up towards the end, with Andrew Jordan passing Andy Willis in a battle started by John Tordoff and Philipp Buhofer respectively. Robin Ward led early on but was forced to retire the Ginetta G4R shared with Ron Maydon. Further back, the Steve Jones/Chris Atkinson Elan held off Stephen Bond/Cliff Gray example for third in class. In 12th overall, Mark Pangborn and David Smithies cornered the C2 class win in their Austin Healey 3000.

The concurrent 60-minute Pre-66 Touring Car race proved to be a straight fight between the two Ford Falcons of Sam Tordoff and Julian Thomas/Andy Wolfe, Tordoff leading from start to finish. Richard Dutton took third to win the Cortina class, chased home by the Mustangs of Rob Fenn and Bas Jansen/Jac Meeuwissen.

On a bright Sunday morning, under a clear blue sky, the combined Masters Gentlemen Drivers & Pre-66 Touring Car rolled off for their races, the GT cars racing the full 90 minutes, while the touring car would be flagged off after an hour. Lockie – for once starting the Shelby Cobra Daytona – led away from David Hart, with Zandvoort track owner Bernard van Oranje in the second Daytona Cobra up next. In ninth overall, Sam Tordoff’s Falcon headed the touring-car section from Julian Thomas, the latter doing a double stint in the Falcon and the Cobra.

After three laps, Lockie led Hart by seven seconds, with Van Oranje a further seven ticks adrift. Vincent Kolb was fourth in a ‘regular’ Cobra, while Robin Ward led the CLP class in the Ginetta G4R shared with Ron Maydon. John Spiers was up next in the TVR Griffith, but on lap 4, he jumped both Kolb and Ward, as the trio snapped at Van Oranje’s heels, along with David Methley’s Cobra. At the back, Stephen Mawhinney was the race’s first retirement, his Cortina pulling off at Tarzan.

Tordoff and Thomas continued to fight for the touring car lead, now chased by the Mustang of local man Bas Jansen, with Richard Dutton up next in the first of the Cortinas. Mixed in between them, the Elans of John Tordoff and Philipp Buhofer were second and third in the GT’s CLP class. In C2, Mark Pangborn’s Austin Healey 3000 led Christopher Stahl’s Ferrari 250 Lusso, the Ferrari having started from the pitlane.

At the front, Lockie’s lead had increased to 14 seconds by lap 6, the Scot pushing to open up a lead big enough for Thomas to defend later against young Olivier Hart. Spiers had moved up into third, and still had Nigel Greensall as the ace up his sleeve, keeping this very much a three-horse race. Van Oranje was fourth but had Tom Coronel waiting in the wings while Ward snapped up fifth overall from Kolb, who would later hand over to none other than Frank Stippler. On lap 7, Ward also passed Van Oranje to move up into fourth. Further back, in 14th position overall, Dutton still led the Cortina class, some fifteen seconds ahead of Alan Letts in 18th overall.

Positions remained stationary in the next few laps, Lockie having left Hart behind to the tune of 20 seconds. Spiers followed 11 seconds down on the Dutchman, while further down the order, the leading touring cars of Tordoff and Thomas both jumped Methley to improve to seventh and eighth overall, as Nathan Dod moved his TVR Griffith into the top ten, and on lap 10 charged past Methley too. On the same lap, the Cortina battle was dealt a blow when Alan Letts was seen pulling off in the Gerlachbocht.

The touring-car pit window was nigh, but for the moment no-one leapt at the opportunity. At the front, Lockie had really turned up the wick and led by 39 seconds, as Spiers had closed in on Hart Sr, the Griffith now trailing the Bizzarrini by a mere six seconds. Van Oranje was a lonely fourth, getting the place back when Ward was in for an unscheduled stop that proved to be terminal. Among the touring cars, leader Sam Tordoff was the first to come in for his mandatory stop, soon followed by Rob Fenn in the Mustang. Dutton was in next, along with Nils-Fredrik Nyblaeus, the Swede handing over Falcon driving duties to his countryman Johan Rosendahl.

Lap after lap now, Hart was losing ground to Lockie at a rate of five seconds – all was not well with the Bizza, and on lap 15, Spiers was inevitably up into second place. Van Oranje was still 15 seconds down but now catching the American-engined Italian car as well, despite having been warned for exceeding track limits. Meanwhile, Julian Thomas was in to hand his Falcon over to his quick preparer Andy Wolfe, with John Dunham swapping places with Mark Owen in their Mustang. On lap 16, Hart was in, with what now was apparent as a slow puncture, handing third to Van Oranje, with Dod – who had passed Kolb – moving up into fourth. In eighth overall, the CLP class lead was now in Buhofer’s hands, the Austrian holding off John Tordoff in ninth. Among the touring cars, Bas Jansen was the last one to come in, handing over to Jac Meeuwissen, while Dutton was penalised ten seconds for crossing the white line on pitlane exit.

After 19 laps, Lockie led serenely, a full minute in front of Spiers, with Van Oranje a further 22 ticks adrift. Nathan Dod was in trouble, though, coming into the pits to give up fourth place to Buhofer, who was followed by Methley, Kolb and John Tordoff, with David Hart having resumed his race in eighth, a lap-and-a-half down on the leader. In 13th overall, Sam Tordoff led Wolfe by four seconds, with Dutton a further 22 seconds behind. At the back, Michael Lyons was forced to abandon the C2 class fight when the Ferrari 250 Lusso gave up.

Now, the pit window for the GTs had opened. Lyons’ C2 class rival Mark Pangborn was the first to come in, handing over David Smithies, while at the front, Spiers and Van Oranje took their first chances to switch places with Nigel Greensall and Tom Coronel respectively. David Hart and John Tordoff did the same, being relieved by Olivier Hart and Andrew Jordan, while in 20th position Jeremy Cooke handed over to Tommy Waterfield in the Shelby Mustang GT350. Next time around, Stippler got in Kolb’s car while Mathias Devis was relieved by brother Régis in the second Mustang GT350 in the field. On lap 23, Buhofer came in for Andy Willis to take over, as Lockie continued to pound in the sub-2-minute laps, soon to be joined by Greensall (in second), Olivier Hart (in seventh) and Tom Coronel (in fifth) performing the same feat.

On lap 24, Lockie finally came in after a massive opening stint, Thomas waiting to grab hold of the Shelby Cobra Daytona Coupé. Despite their elite-driver penalty, Thomas resumed well in the lead, a minute and 21 seconds ahead of Greensall. Coronel trailed by another 42 seconds, with Willis leading the CLP class in fourth. In fifth overall, Sam Tordoff led the touring car race, now 16 seconds away from Wolfe, the Falcon pair sandwiching Olivier Hart in sixth. Methley was ninth, with Dutton rounding out the top ten, but Stippler was on the way up in 11th. In 18th overall, Smithies ruled in C2.

After a full hour of racing, Sam Tordoff was flagged off as the touring car winner, his Falcon leading home the similar car of Julian Thomas/Andy Wolfe by some 30 seconds. In third overall, Richard Dutton won the Cortina class, the Fortec Motorsport boss staying ahead of two more American V8s – the Mustangs of Rob Fenn and Bas Jansen/Jac Meeuwissen, with the John Dunham/Mark Owen Mustang and the Nils-Fredrik Nyblaeus/Johan Rosendahl Falcon further back. Italian Federico Mezzetti won the Mini class.

Half an hour still remained for the Gent Drivers. Thomas now had a full lap over Coronel in third, with only Greensall on the lead lap, 1 minute and 26 seconds behind. Olivier Hart had hauled the delayed Bizza up into fourth, with Willis leading Jordan in fifth and sixth, as the CLP class fight hotted up – Jordan was lapping two seconds faster than Willis. Stippler and Methley were seventh and eighth, with Peter Dod in ninth but looking at a stop-and-go penalty for missing their mandatory stop, so soon Régis Devis would move up into that spot. Behind the Belgian, Chris Atkinson ran third in the CLP class in the Elan started by Steve Jones, chased by Cliff Gray in the Elan started by Stephen Bond, while Smithies still comfortably led C2.

On lap 34, however, Greensall went missing, his TVR Griffith going no further than the daunting Scheivlak corner at the back of the circuit. This meant that Coronel was second but a lap down, so Thomas was safe from any safety-car issues. Olivier Hart chased his countryman in third, 17 seconds down, while the CLP fight was on – Willis’ gap to Jordan was now a mere 1.7 seconds. In sixth, Stippler was well adrift, a minute and 14 seconds away from the warring Elans. On lap 38, Jordan was through.

As the race ran into its final ten minutes, Thomas ruled imperiously, often lapping two seconds faster than both Coronel and Hart, the gap to his nearest pursuer now up to a whopping two minutes and 25 seconds. Jordan in fourth has eased away from Willis by six seconds, with Stippler, Methley, Devis and Dod next up. Atkinson and Gray still battled hard over tenth overall and third in CLP, the pair now separated by three seconds while Smithies had C2 sewn up, the Austin Healey leading Tommy Waterfield’s Mustang GT350.

After 90 minutes, Thomas crossed the line after a truly dominant performance, two minutes and 28 seconds ahead of Coronel, with Hart Jr 14 seconds further back. Jordan netted the CLP class win for himself and John Tordoff, with Willis trailing by five seconds. Stippler finished a lonely sixth, ahead of Methley and the Dods, while Atkinson narrowly kept ahead to claim third in CLP. 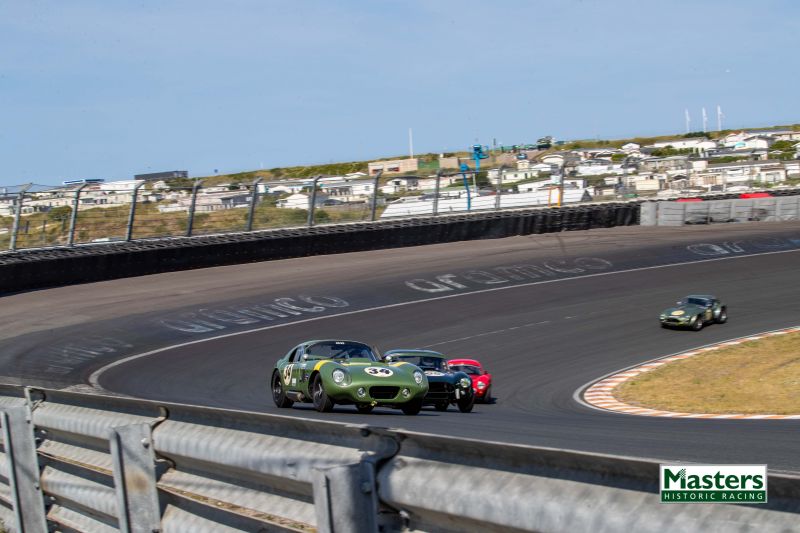 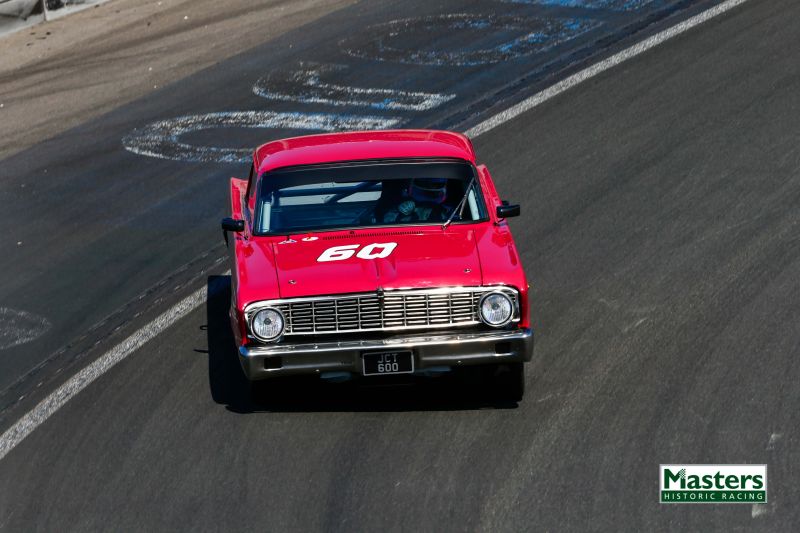 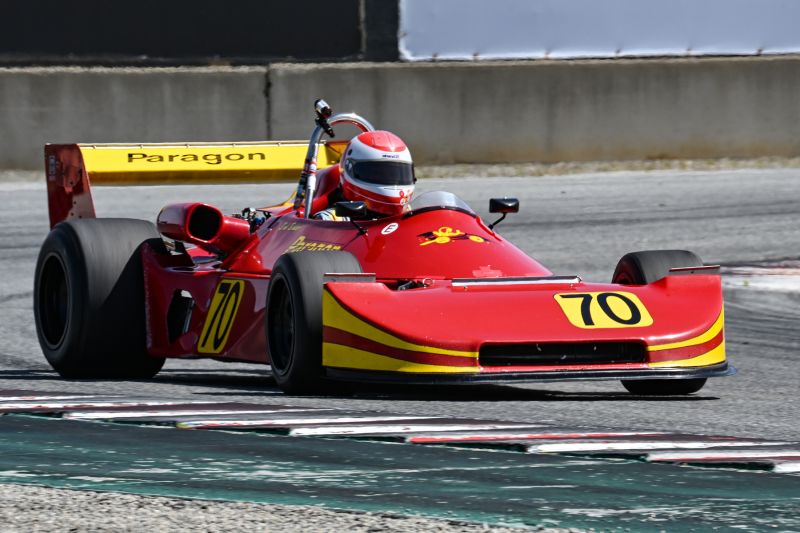