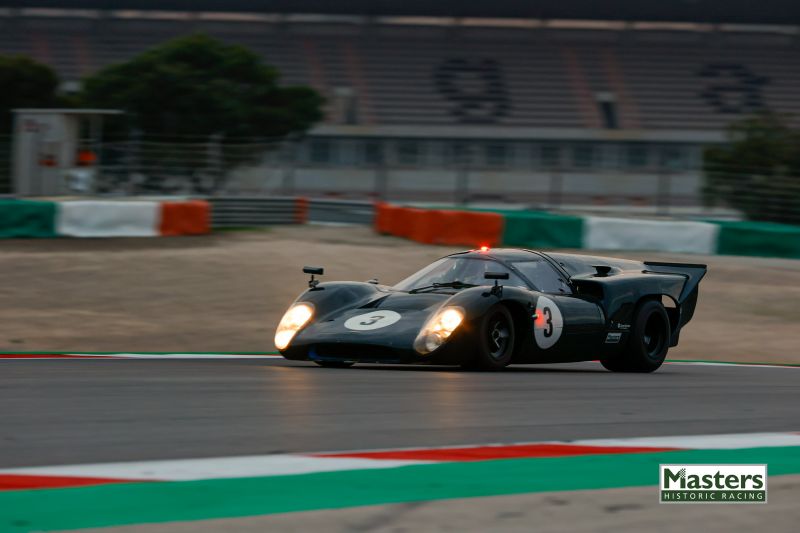 Newly formed duo Julian Thomas and Andy Wolfe powered to a largely unchallenged Masters Sports Car Legends victory in the final race of the season at the Algarve Classic Festival. The pair sharing Jason Wright’s Lola-Chevrolet T70 Mk3B, Thomas hit the front when early leader Pedro Macedo Silva crashed his T70 Mk3 at turn 11, after which a lengthy safety-car period bunched the field up right up to the race’s pit window. After that, Wolfe produced some stunning lap times to beat Michael Gans in the Lola T290 by 56 seconds.

“It was good fun, I loved that”, said a happy Thomas. “Racing a T70 at Portimão must be up there as one of the most exciting things in life!”

“I just don’t know how not to push!” said Wolfe about putting in the mega laps right until the end. “If I don’t push, I make mistakes…”

“It was pretty exciting, actually”, Gans said despite being unable to follow Wolfe. “At the start, I had the Portuguese T70 right in front of me, and then it suddenly went off – I assume that was because of the pressure I put on him! After the stops, I just couldn’t keep up with Andy.”

Behind them Nigel Greensall produced a stunning comeback drive, hauling John Spiers’ McLaren M1B from eighth up to third overall at the flag, in the process cornering the pre-66 Hulme class win. Behind the Mathias & Marc Devis Chevron B19 in fourth, Andy Willis was safely home in fifth, enough to pip Tom Bradshaw to this year’s title, as Bradshaw’s B19 succumbed to the same fuel-pressure issues that also blighted the car in qualifying. With Chevron’s demise on lap 2, the race was robbed of its title showdown between Bradshaw and Willis, but the latter did well to stay out of trouble and subsequently seal the title.

“It was fantastic!” said a beaming Greensall. “That was an incredible race, I’m extremely thrilled with that.”

“It was a bit lonely, I didn’t see many other cars”, said Devis Sr, whose son had seen more excitement. “It was more fun for me”, Devis Jr agreed, “and I’m also proud that we did the fastest pitstop of the race.”

In sixth overall, Chris & Freddie Lillingston-Price bagged the Bonnier class win in their Chevron B8 while Chris Jolly and Steve Farthing salvaged second in the Hulme class by taking seventh overall, as their Cooper Monaco T61M stumbled on the final tour.

“When I went over the crest for the last time, it just went boom, and I had no gears, no nothing”, Farthing explained. “So I coasted all the way down to the line… It was tough out there in the dark – the B8 behind didn’t have any lights, it was just a shape behind me.”

With delays having piled up all through the day, the Masters Sports Car Legends field got moving some 50 minutes after its intended start time. This meant a serious threat to the race going its full one-hour length, as sunset was approaching fast – and that with a straight title showdown beckoning between Tom Bradshaw and Andy Willis, the former holding a slender two-point lead in the championship. Neither of them would start from pole, however, as Bradshaw needed to recover from eighth on the grid after a fuel-pressure issue in qualifying, while Willis was fourth behind local hero Pedro Macedo Silva’s Lola T70 Mk3 and American Michael Gans in the Lola T290, who were awarded front-row seats after the pole-winning Lola T70 Mk3B of Julian Thomas/Andy Wolfe was hit with a three-place grid drop.

As Macedo Silva led Gans and Thomas across the line on the opening lap, Bradshaw had already made up four places to be fourth ahead of his rival Willis – but he would also have to negate a 15-second ‘dominant car’ time penalty at the stops as the winner of the previous two races. Niklas Halusa was sixth in the Alfa Romeo 33TT3, leading Mathias Devis in the second of the Chevron B19s and John Spiers in the pre-66 class-leading McLaren M1B – but then disaster struck for the championship leader, as on the second lap Bradshaw’s Chevron B19 departed the scene with the same oil-pressure issues as in qualifying, provoking the arrival of the safety car. Willis was in the wars too, as he was under investigation for a starting-procedure infringement, but at least he was still in the race, making him an instant favourite for a last-gasp title steal.

The straight fight was taken away from us, so now the focus was on Willis doing enough to negate his points gap to Bradshaw – which effectively meant staying in the race. On lap 4, the field was given the green flag again, and Macedo Silva continued to lead from Gans and Thomas, while Halusa got up to fourth at the cost of Willis. Spiers also made up a place at the restart, the McLaren getting in front of Devis Jr, with Chris Lillingston-Price now up into eighth in the Chevron B8 ahead of Chris Jolly in the Cooper Monaco T61M and the Chevron B8’s class rival, David Kelly in the Crosslé 9S.

Again, it proved to be a false start to the race, as this time it was Macedo Silva who disappeared from the scene at turn 11, causing the second arrival of the safety car. Moments before, Thomas had vaulted Gans and now found himself promoted into the lead. The Portuguese driver suffering a collapsed suspension, so the caution period ran straight onto the doorstep of the pit window – it would open 45 seconds after the green flag was waved, and the field was still as bunched up as it was at the start.

As the others continued, Halusa was the first to come in on lap 11. At the front, Thomas created a six-second gap over Gans, with Willis three further ticks behind, while Spiers was the next to pit, ready to hand over to Nigel Greensall. Further back, Kelly had passed Lillingston-Price in their straight Bonnier-class fight, the Crosslé showing that it wasn’t just something different in a Chevron B8-dominated class.

At the half-hour mark, Willis’ penalty was announced – it would be a stop-and-go, meaning that the Lola T212 would have to pit twice in the next few minutes. Gans was now in too, as was Jolly, who would hand over to Steve Farthing, with Chris Lillingston-Price swapping places with son Freddie, and David Kelly making way for fellow Irishman Stephen Doyle. On lap 14, they were joined by Thomas (with Andy Wolfe stepping in), Mathias Devis (dad Marc taking over) and Willis for his mandatory stop. Meanwhile, Halusa was in for a second stop in a misfiring Alfa, as Willis decided to take his penalty straight after, coming back in again on the next lap.

With 20 minutes still to go, Wolfe led Gans by seven seconds, while Devis moved up into third as he profited from Willis’ penalty. Farthing was fifth, having vaulted into the pre-66 class lead thanks to the longer stop required for Greensall’s elite-driver status. Behind the Cooper Monaco, Freddie Lillingston-Price had got back past Doyle’s Crosslé again to run sixth, as Greensall had the best part of a minute to cover in order to get his rival in sight.

In the final quarter of the race, the cars were requested to turn their lights on, as dusk set in. Wolfe, meanwhile, was hammering out the fast laps, now having cleared Gans by 20 seconds, with Devis a further 39 seconds back. 25 ticks after the Belgian, Willis followed in fourth, hoping that the Lola T212 would hold on to the end – a second place in the Marko class behind Devis would do just fine for the title. Behind the top four, however, gaps were cut in a sensational way, young Freddie Lillingston-Price closing in on Farthing, with Greensall mimicking the leaders’ lap times to gain ground on the both of them. Having said that, Wolfe, now truly having some fun, began to slash two more seconds off his best efforts so far to increase his lead over Gans to half a minute.

Behind the all-conquering Wolfe, who ran out to a 56-second lead at the chequered flag, Gans was secure in second place, but Greensall was absolutely flying and picked off Farthing, Willis and Devis in subsequent laps to take a close third to the American. Devis and Willis took fourth and fifth respectively, a result that for Willis was enough to jump Bradshaw in the final standings and take this year’s title. In sixth, Farthing took second in the pre-66 class, 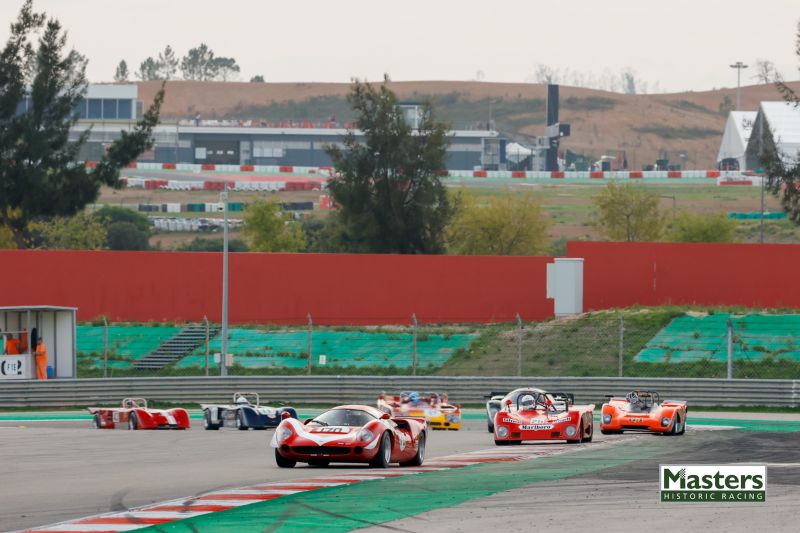 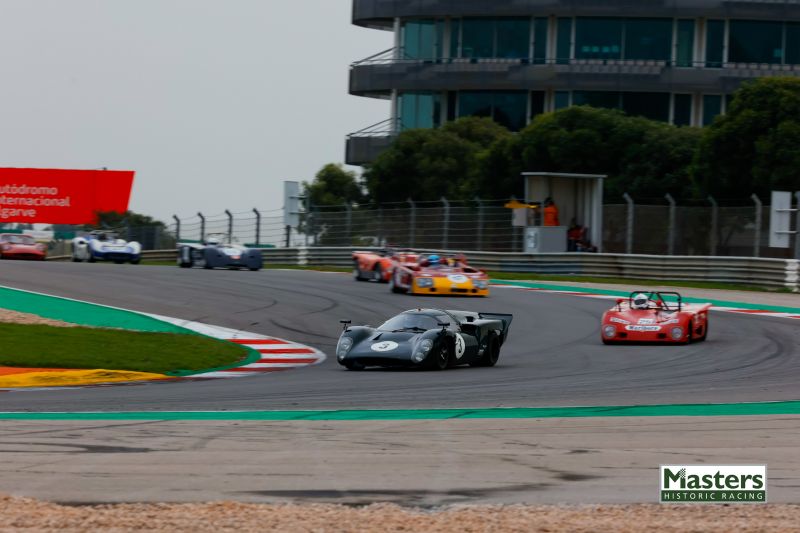