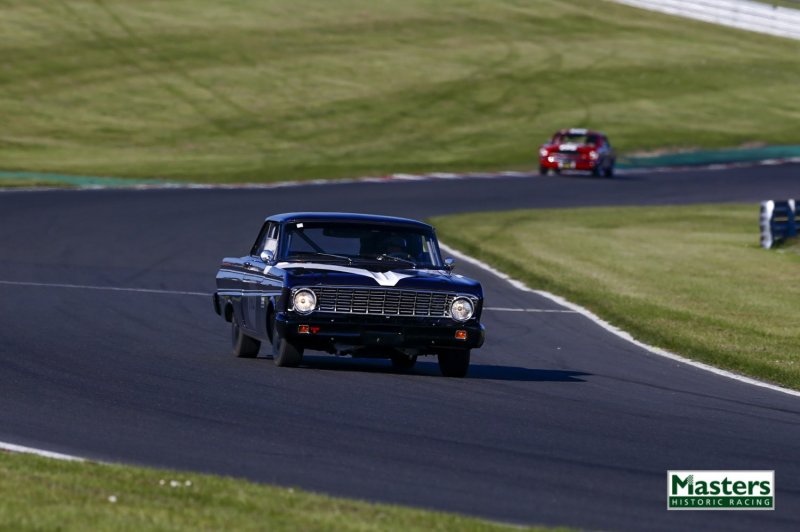 In a true struggle of endurance, Julian Thomas and Calum Lockie brought home their Ford Falcon to win a truly spectacular Masters Pre-66 Touring Car race at Brands Hatch. Battling the Mustangs of Henry Mann/Steve Soper, Rob Fenn/Jake Hill and Dave Coyne early on, the Falcon took command after the stops, as one after the other Mustang began to suffer from brake issues.

Saved by a late safety-car period, Coyne hung on to second place from Mark Sumpter in the leading Lotus Cortina, but when Sumpter was handed a 30-second time penalty for avoidable contact, pushing him down to 12th overall, Roy Alderslade picked up third place and Cortina class honours.

Fortunes swung back and forth among the Cortinas too, with Tom Ingram mixing it with the V8s during his opening stint. Shaun Balfe and Tom Ashton kept it clean to take fourth, and second in class, ahead of Attard having taken over from Ingram. Despite an additional pitstop Richard Dutton still claimed sixth from Mark Martin, as another contender – the Irish Cortina of Patrick Shovlin and Michael Cullen – also dropped places due to a time penalty.

Nick Padmore and Giles Page took a stunning ninth overall on their way to an emphatic win in the Mini class, as the rivalling Ian Curley/Bill Sollis car succumbed to brake problems and a loose bonnet. Nathan Heathcote proceeded to take a strong second ahead of the Matthew & Jonathan Page pairing.

As soon as the field was let loose, Henry Mann grabbed the intiative from Robb Fenn, eeking out a two-second lead, as Fenn came under pressure from Thomas while Coyne passed Craig Davies for fourth. The latter, however, disappeared after just two laps, one Mustang challenge gone.

Geoff Letts in the leading Cortina was in sixth (and now fifth) but not for long either, as Letts pulled off too, allowing Tom Ingram into the Cortina class lead ahead of Mark Sumpter, Shaun Balfe, Patrick Shovlin, Richard Dutton and Roy Alderslade in a veritable Cortina train. Next up was the fight for the Mini class lead, Nick Padmore holding off Ian Curley in 11th overall.

Three laps into the race, Mann was up on the Fenn/Thomas battle by three seconds, with Coyne having caught up to make it a three-way fight for second. On lap 4, Thomas in the Falcon found a way past Fenn, who now had Coyne filling his mirrors.

However, a quarter of the race gone, everything changed. First, the lead changed when Mann poured into the pits, the brakes of his Mustang gone. This handed Thomas the lead, but the Falcon consequently dropped behind Fenn and Coyne, leaving Thomas to do it all over again. Soon it was a four-way battle, as Ingram had caught up with the three V8 cars. Then, in even more drama, Fenn outbraked himself to drop from first to fourth, while Thomas reclaimed the lead from Coyne!

This captured so much attention that it almost went overlooked that Nick Padmore in the Page 3 Mini was now in a solemn class lead in tenth overall, Ian Curley having retired Padmore’s nearest challenger to the pits with a loose bonnet and failed brakes. This left Nathan Heathcote second in class, in 16th overall, one place ahead of the other Page 3 Mini with Matthew Page at the wheel. Behind Ingram in the Cortina class, Sumpter was in fifth, still leading Balfe, Dutton, Shovlin and Alderslade.

Ingram himself, meanwhile, was showing his two Mustang rivals some of his tricks, as on lap 13 the BTCC driver drifted his Cortina around both Coyne and Fenn in one spectacular go to move up into second. Soon, he stretched away from the pair of warring ‘Stangs. By now, Ingram was trailing Thomas by 4.5 seconds, the Falcon looking good as the pit window approached. In 11th overall, Nigel Greensall had pushed Alex Taylor’s Mustang all the way up from last on the grid while in 21st and 22nd, Colin Kingsnorth and Harry Mailer were having a BMW 1800 battle of their own.

On lap 16, Fenn was the first of the top runners to make his stop, handing over to Jake Hill, and he was soon followed by Coyne and Dutton, both driving solo, and Shovlin being relieved by fellow Irishman Michael Cullen. On the next lap, Thomas relinquished the lead to Ingram as he handed over to Calum Lockie. Thomas was joined in the pits by Sumpter, Alderslade, Padmore (swapping the wheel with Giles Page) and Greensall (changing hands with Taylor). With less than a minute left in the pit window, Ingram finally resigned to hand over to Marco Attard.

The pitstops having panned out, Lockie led Coyne by five seconds, with Hill in third, chasing the other Mustang hard. Dutton and Sumpter had both jumped Attard at the stops to be fourth and fifth, as Attard led Tom Ashton in the Cortina started by Balfe, Alderslade and Cullen. Building on Greensall’s epic opening stint, Taylor had now entered the top-ten.

On lap 20, Hill had done it to move up into second place, but was he lapping quick enough to catch Lockie? Meanwhile behind Coyne, Sumpter had relieved Dutton from fourth while Alderslade had passed Attard in a one-lap switch-around for the four Cortinas. One lap later, Dutton was into the pits, giving the place to Alderslade while Ashton also moved past Attard, with Cullen and Taylor also looking to pounce. When Dutton rejoined, he was down to tenth.

With less than a quarter of an hour to go, Lockie had increased his lead to 9 seconds while Hill was now dropping back into Coyne’s hands in third. Sumpter was the consummate Cortina-class leader now, leading Alderslade by ten seconds, and Aston by 14 ticks. On lap 25, Hill’s pace dropped even further and the BTCC star was forced to relinquish places to both Coyne and Sumpter, before retiring his car to the pits. Having managed his Cortina best, Sumpter, a former overall winner of this race, began to harry Coyne from all angles, but to no avail.

On lap 28, Alex Taylor was in the gravel trap at Stirlings, having already spun around two laps before, and this brought out the safety car. This saved Coyne’s second place, as Sumpter was followed home by seven more Cortinas – Alderslade leading Ashton, Cullen, Attard, Dutton, and Mark Martin – and the lead Mini shared by Nick Padmore and Giles Page. In 14th overall, Heathcote took second in the Mini class ahead of Matthew & Jonathon Page. In 18th, Henry Mailer won the battle of BMWs.

The sting was in the tail, though, as Sumpter collected a 30-second time penalty for avoidable contact. This promoted Alderslade in third overall and handed him the Cortina class victory.