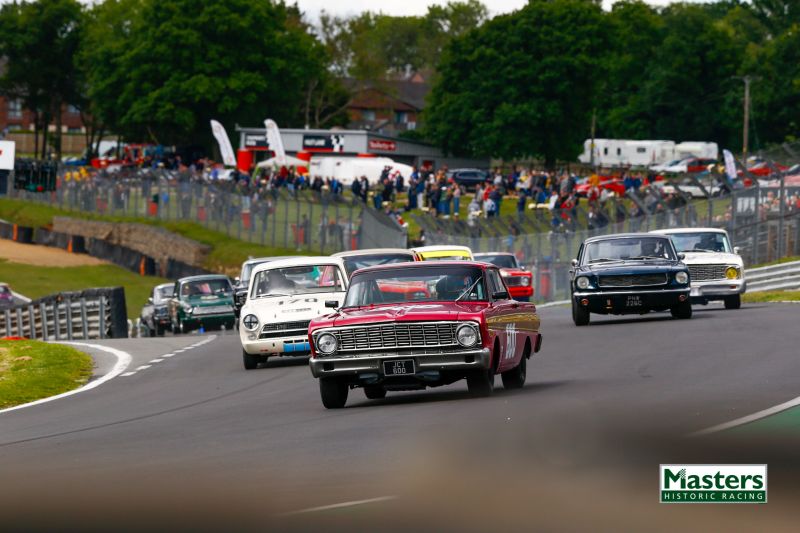 Sam Tordoff took everything out of his Ford Falcon Sprint to win a hugely entertaining one-hour Masters Pre-66 Touring Car race at the Masters Historic Festival. Leading the opening stint from the front, the former BTCC star overcame his added 20-second ‘elite-driver’ pitstop time to reclaim the lead from Craig Davies on lap 24. The Mustang driver had only stolen that lead the lap before from fellow Mustang pedaller Alex Thistlethwayte who had assumed his position at the front after the stops.

The fourth car in with a shout, Alex Taylor’s Mustang, was forced to retire on the final lap, handing that place to Marcus Jewell and Ben Clucas, who came through to win the 1600cc class in their Lotus Cortina while in a stunning fifth overall, Nathan Heathcote prevailed in an epic tussle for Mini honours with Jeff Smith. Smith was later penalised for stopping short during the mandatory stops, but Heathcote had his rival covered on the road as well. A long way back, the Jonathon Page/Nick Swift Mini took third in the under-1300cc class.

In sixth overall, Geoff & Alan Letts took second in the Cortina class, leading home the Ford Falcon of Leo Voyazides/Simon Hadfield, while John Spiers and Greensall profited from a time penalty handed out to David Dickenson to snatch third in class. After leading all race, Colin Kingsnorth and Jonathan Hoad cornered the 1600-2000cc class win in their BMW 1800 tiSA.

On a quiet Sunday morning in Kent that wouldn’t remain quiet for long, Tordoff powered away from pole, soon followed by the Mustangs of Alex Taylor, Alex Thistlethwayte and Craig Davies thundering past the Cortina of Jewell, with Geoff Letts in sixth after the first lap – but soon the safety car was out, with Stephen Upsdell ending up in the gravel with his Cortina.

After four laps, the field was set free again, with Tordoff setting fastest laps of the time in his attempts to break free from Taylor, who wasn’t letting the Falcon go as easy as Tordoff wished. Behind them, Davies made it through into third, while Dan Williamson’s Falcon was up into fifth but with a drive-through penalty for an out-of-position start hanging over his head. On the verge of the top-ten, the two main Mini characters were nose-to-tail – almost nose-in-tail! – as Nathan Heathcote harried Jeff Smith for the class lead. In 34th overall, the Colin Kingsnorth/Jonathan Hoad BMW 1800 tiSA led the 1600-2000cc class.

Four more laps gone, though, and Tordoff had indeed started to make his mark, now five seconds away from Taylor, who had Davies chasing him another six seconds behind. Further back, Geoff Letts had jumped Jewell for the Cortina class lead, with Richard Dutton creating a lead trio in class. Next up were the Falcons of Leo Voyazides and Tom Sharp, while Heathcote had taken the lead in the Mini class in 11th overall, now ferociously chased by Smith.

Approaching the pit window, Tordoff led by ten seconds, while Davies had cut down the gap to Taylor to take second just as another safety-car period followed – one that would inevitably last into the pit window. So the cars came indeed pouring in as soon as they could, bar Ollie Streek’s Cortina, Carl Nairn in the Mini and Harry Barton’s BMW, who took their opportunity on the next lap, right at the moment the field was given the green flag.

Now we had Alex Thistlethwayte in the lead, chased by Davies and Taylor, with Alan Letts (in for brother Geoff) in fourth, followed by Smith, David Dickenson whose Cortina had leapt some of the earlier leading Cortinas (as it later turned out by stopping short for which he would be penalised with 30 seconds of added time), while Tordoff was coming back from his ‘elite driver’ pitstop penalty in sixth, but only seven seconds away from the leader. Heathcote was eighth, hunted down by Simon Hadfield who also smelled victory in the Falcon started by Voyazides.

After 17 laps, Thistlethwayte still hung on to the lead but only barely, as he now found Davies breathing down his neck. Tordoff was already up into fourth, having demoted Dickenson, while Hadfield had moved into sixth and was also looking to pounce on the new leading Cortina. In seventh and eighth, Smith and Heathcote had resumed their gigantic Mini battle while being chased by Ben Clucas who was also on the up in the Cortina started by Jewell, and had just demoted Alan Letts to tenth.

With 20 minutes still on the clock, the stage was set for a thrilling finish, with the front six cars running ever closer to each other. Thistlethwayte still wouldn’t break despite Davies now climbing all over him while Tordoff had closed the gap to Taylor and looked to break back into the top three. Eight seconds further down the road, Hadfield was having a hard time getting past Dickenson, who was driving a great stint but with that time penalty hanging over his head. The same applied to Jeff Smith, so it turned out, which robbed the race of its enthralling Mini lead battle. Meanwhile, Tom Sharp’s Falcon was out with engine trouble.

It was all change on lap 23, when Thistlethwayte’s resistance was finally broken, as Davies swept into the lead, immediately followed by Tordoff who had already found a way past Taylor. Then, on the next lap, Tordoff hit the front again as he charged past Davies to reclaim the lead. The front four had a 15-second gap in hand to Hadfield and Clucas who weren’t looking like closing it, so it would be down to Tordoff v Davies, and Thistlethwayte v Taylor. Dickenson was seventh but with a time penalty while Heathcote in eighth led the Mini class by his own hand despite his rival Smith also being penalised. Two seconds behind, though, Ian Curley was closing in another Mini.

With five minutes remaining, Tordoff inched away from Davies lap after lap to be four seconds clear on lap 28. Thistlethwayte, meanwhile, did more hanging on, but this time for third place, continuing to fend off Alex Taylor’s attentions. Behind them, Clucas nailed a slowing Hadfield for fifth at the start of lap 29, as Heathcote in eighth overall put the matter of the Mini class win beyond discussion by now leaving Smith behind by seven seconds. On the edge of the top-ten, it was going to be tight whether Alan Letts could hold on to third in the Cortina class as Nigel Greensall was approaching fast in the Cortina started by John Spiers, while in 14th overall, the Jonathon Page/Nick Swift Mini ran third in the Mini class.

At the chequered flag, Tordoff won by 5.2 seconds over Davies, with Thistlethwayte 11 seconds down, while shockingly Taylor failed to complete the final lap, his Mustang hit by a misfire. With all the penalties added, Jewell/Clucas took fourth and the Cortina class win, ahead of Heathcote with the Mini class win, and the Letts brothers taking second in the Cortina class. Voyazides/Hadfield ended up seventh, while Spiers/Greensall pipped the penalised Dickenson for the final under-2-litre podium spot in eighth overall. The Richard Dutton/Neil Brown Cortina completed the top ten. Despite the time penalty that dropped him to 12th overall, Smith still took second in the under-1300cc class, ahead of the Page/Swift Cooper S, while Colin Kingsnorth and Jonathan Hoad cornered the 1600-2000cc class win in their BMW. 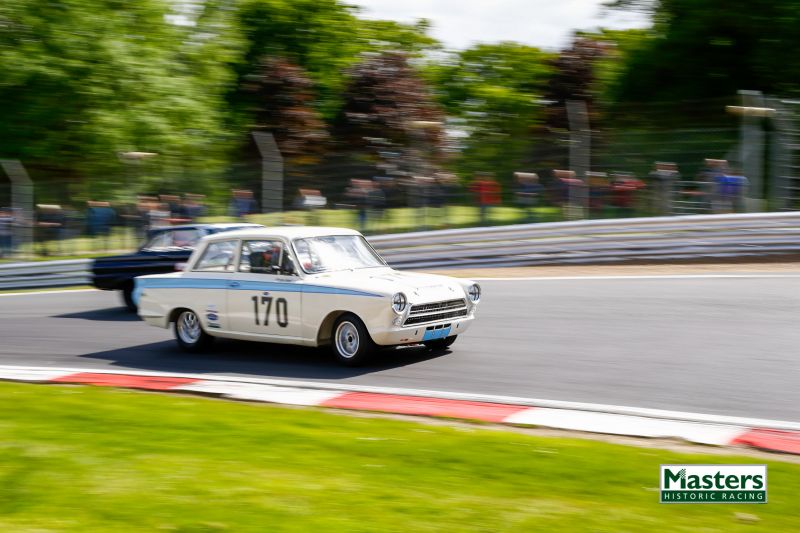 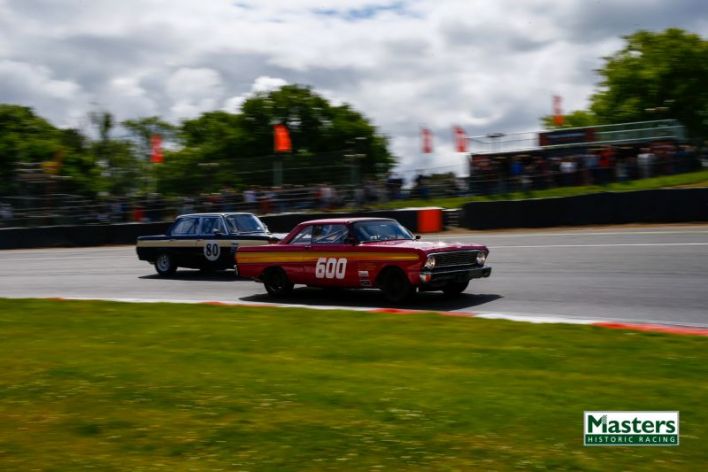 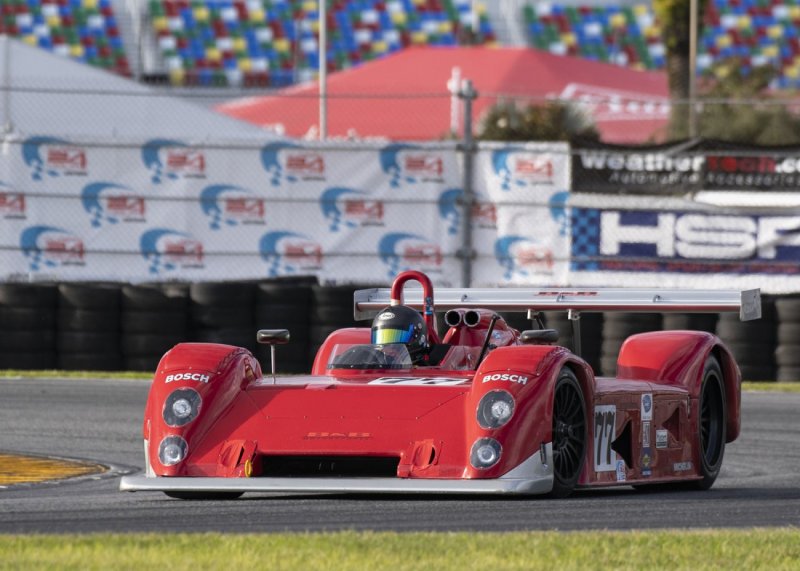