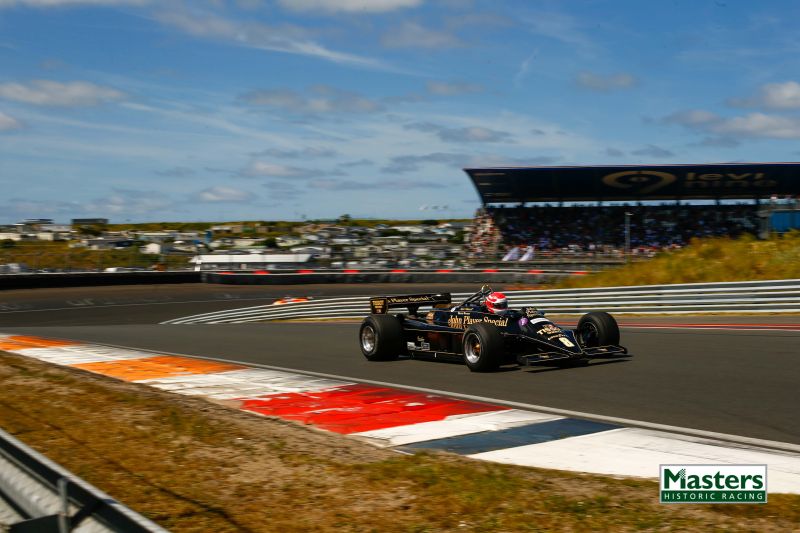 Marco Werner looked in control all throughout the first Masters Racing Legends race for 1966-’85 Formula One cars at Zandvoort, as the German’s Lotus 87B led from start to finish, fending off challenges from Frank Stippler’s Alfa Romeo 182 and Michael Lyons in the post-82 class-winning Lotus 92.

“In the beginning it was easy”, said Werner, “but going into the final laps I had a lot of vibrations in the car – maybe something with the differential. So you see it’s important to always have a gap!”

Stippler kept his countryman honest until he was forced to retire the V12-engined car on lap 7, allowing Lyons up into second place and Steve Brooks’ Lotus 91 into third, thus completing a full podium of JPS-liveried Lotus cars. A safety car to allow for safe retrieval of Stippler’s stranded Alfa Romeo helped Lyons to close on Werner, but after the green flag was waved, the German tore away to an eight-second lead at the chequered flag.

“I was starting to get close to Frank when he, unfortunately, had to retire”, said Lyons. “Then, after the safety car, I was happy with my pace but had a little issue at the end. Nothing to really worry about for tomorrow, though.”

Warren Briggs (McLaren M29) won an entertaining race-long fight with Georg Hallau (taking second in the post-82 class in his Theodore N183) and Marc Devis (Lotus 78) while Mark Hazell was seventh in the Williams FW08C that placed third in the post-82 class result. In eighth, Jonathan Holtzman comfortably took pre-78 honours ahead of Marco Coppini’s March 761, while in the process fending off Neil Glover’s Arrows A5. In 13th overall, Paul Grant won the pre-72 class in his De Tomaso 505/38.

“Just being in Holland, at Zandvoort!” said an enthusiastic Brooks, voicing his idolation of the Dutch circuit. “It’s a special track, isn’t it?”

“It was beautiful!” echoed Coppini. “A beautiful race, a beautiful place, beautiful weather – it was just perfect!”

“I was still learning the track”, said Holtzman. “It’s my first time here. This track is fantastic – once we started learning, we improved our times, so tomorrow maybe we can be competitive against the ground-effect cars. And I’m very impressed to see all these people coming to watch us. It makes you want to do a better job – it’s very motivating!”

“I was too late for the start”, said a rueful Grant. “I was still eating when my manager called me! So I started one lap down… I let the race go and was just showing the car to the people. I love it so much, it’s just as it was, the patina is just wonderful.”

Perfect racing weather greeted the Masters Racing Legends as they lined up on the grid for their first race of the weekend, with Marco Werner on pole and countryman Frank Stippler joining him on the first row. Werner’s Lotus 87B was quickest away, but he wasn’t allowed to break free by Stippler’s V12-engined Alfa Romeo 182, as Michael Lyons slotted into third in the Lotus 92. Hazell was fourth in the Williams FW08C, chased by Steve Brooks in the Lotus 91, Warren Briggs in the McLaren M29, Georg Hallau in the Theodore N183 and Marc Devis in the Lotus 78.

In ninth overall, Jonathan Holtzman’s Tyrrell P34 was first in the pre-78 class, ahead of Steve Hartley who had started from the back in a McLaren MP4/1 that proved so troublesome in practice and qualifying. Meanwhile, another car that was in trouble in practice soon retired to the pits, Lukas Halusa giving up on a Williams FW08 with gear change problems.

On lap 3, Werner had broken away by 3,2 seconds as Lyons hounded Stippler for second. At the cost of Hazell, Brooks was up into a fourth-place now also fiercely contested by Briggs, Hallau and Devis, all bunched up into one group. One lap later, Briggs followed Brooks up into fifth, demoting Hazell to sixth. Hartley was now up into ninth, while outside the top ten, Neil Glover’s Arrows A5 fought Marco Coppini’s March 761 and Mark Dwyer debuting the ex-Jeremy Sayles Osella FA1D, with Arthur Bruckner’s Arrows A6 and Paul Grant’s De Tomaso 505/38 up next.

As Werner continued to lead, Stippler kept resisting Lyons, the pair now two seconds down on the leader. Brooks and Briggs had broken clear of Hallau, Devis and Hazell, while Hartley was catching up with the latter trio. On lap 5, however, the McLaren came trundling into the pits, its driveshaft broken, handing back ninth overall to Holtzman.

Ten minutes into the race, the leading three cars remained three seconds apart, but on lap 7, the Alfa Romeo suddenly disappeared from sight, as it pulled off at the Hans Ernstbocht. This allowed Lyons into second, while Brooks was now a clear third, 22 seconds in arrears of Werner but eight seconds ahead of Briggs. Stippler’s Alfa was parked in a dangerous position, however, so the safety car was brought out on lap 8. Meanwhile, Halusa’s issue seemed fixed, allowing the Austrian to return to the track.

On lap 10, the first six all bunched up nicely, the green flag was waved and racing continued with three JPS-liveried Lotus cars leading the pack away. Werner now had Lyons all over his gearbox, with Brooks a safe third ahead of Briggs, Hallau and Devis, while further back Hazell was chased by pre-78 class leader Holtzman, Glover, Dwyer and Coppini, the Italian passing Dwyer in the Osella on lap 11. Bruckner and Grant were two laps down and mixed into the field. Soon, Dwyer was into the pits with a front left wheel issue.

With four minutes still to go, Werner had created a small but useful margin of 1.3 seconds over Lyons, while Brooks followed nine seconds down. Briggs, Hallau and Devis continued to war over fourth place, two seconds away from Brooks, as Hazell was now in no man’s land in seventh. Holtzman was eighth, fighting Glover, with Coppini up next.

As the clock wound down, Werner’s lead grew to 6.7 seconds, as Lyons gave up the chase, and so after 15 laps, Werner was flagged off as the winner, with Lyons coming home eight seconds behind as the post-82 class winner. Brooks took third ahead of Briggs, Hallau (who took second place in the post-82 class) and Devis, with Hazell finishing a distant seventh and third in the post-82 class. In eighth, Holtzman ran home the pre-78 class win ahead of Glover, Coppini, Bruckner, Dwyer (still classified as 12th) and pre-72 class winner Paul Grant. 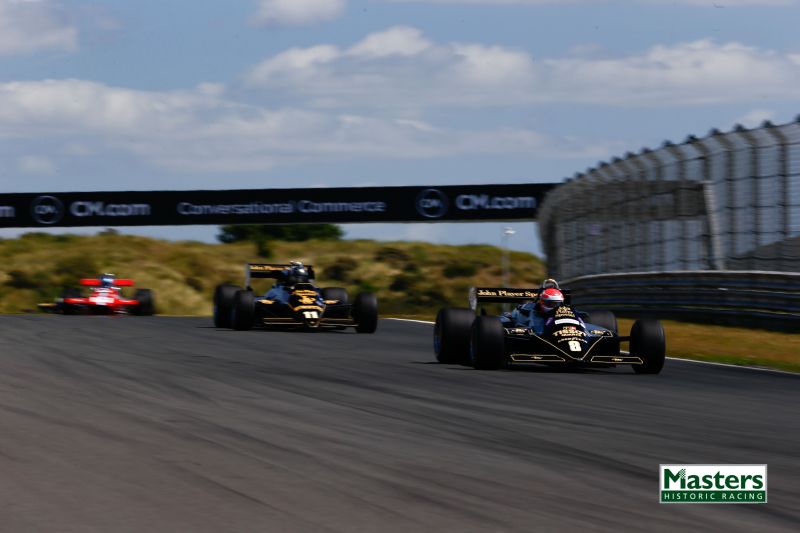 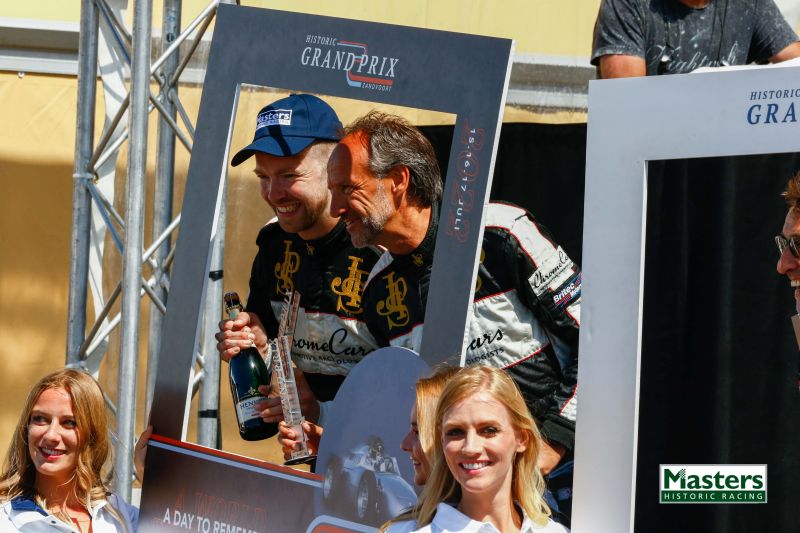